Many moons ago, as part of my teacher training, I enrolled in a woodworking course. With a lot of help, I managed to make two stools, two cupboards and two coffee tables. As I had just been married, these pieces of furniture were welcome additions to our new home. Over thirty years later, one stool and the two coffee tables are still in use. Sadly, the rungs on the second stool became loose after many years of wear and it was disposed of. 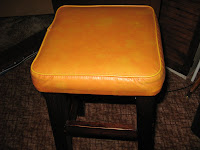 I learnt many new skills whilst making my furniture. We had a very patient teacher, who was for ever telling us to tie our long hair up, to prevent the woodworking machines from scalping us. Now-a-days we would, of course, have to wear hair nets. The stools were my first woodworking project.

After making the wooden frame of each stool, I glued foam onto the top of both seats. To cover the foam, I hand sewed the orange, vinyl covers. It was VERY hard to hand sew. I used a punch to put small holes in the vinyl before sewing. As you can see from the photos, the top edge of the cushion is finished with piping. This was simply a narrow strip of vinyl folded over piping cord and sewn between the top and side seams. This was the hardest part to sew as the needle had to go through four layers of quite thick vinyl. 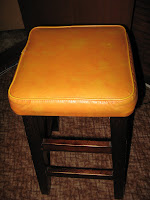 I purposely chose orange as both orange and lime green were the popular colours of the seventies and I didn't like lime green. When we built our own house a couple of years later, we again chose orange, this time as the colour for our benchtops. Most would say orange is a very outdated colour now. We still have that orange kitchen. Who knows, it may become fashionable again.

That was the first piping I ever did and most probably the hardest I will ever do. When I look at the one remaining stool, I am amazed that the hand sewing has held together all these years, especially given the fact that the stool is now used as a step ladder. If I could hand sew my own piping into those vinyl cushions, I think I can machine sew piping into anything.

I'll show you my recent sewing projects with piping soon...