Piping can make a big difference to the look of a finished sewing project.  I don't particularly enjoy sewing piping, but nor do I find it difficult. It's cheaper than buying store bought piping and I can choose exactly the colour I want to match or co-ordinate with what I'm sewing. Here's how I do it....
Step 1: 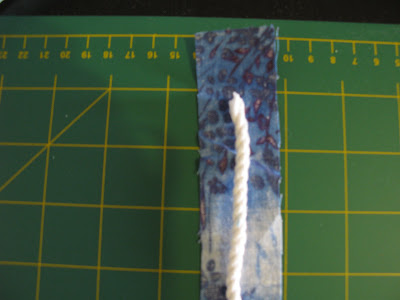 Cut a strip of material to encase the piping cord. Here I've used a size 3 cord and have cut the material 3 cm in width.
Step 2: 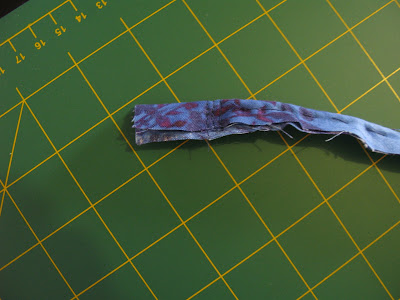 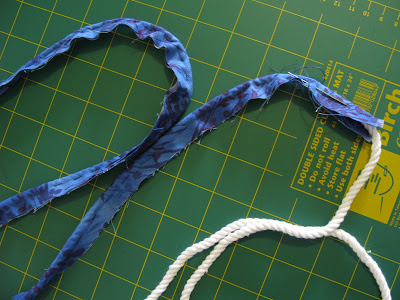 I tack the casing (large stitches by hand) close to the cord. This is only roughly done. It's just to hold the cord in place and will be removed later. 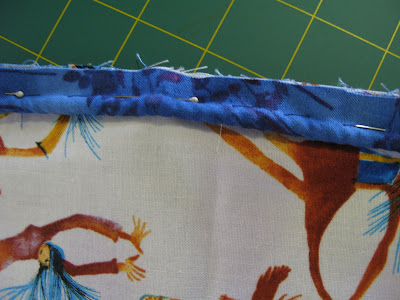 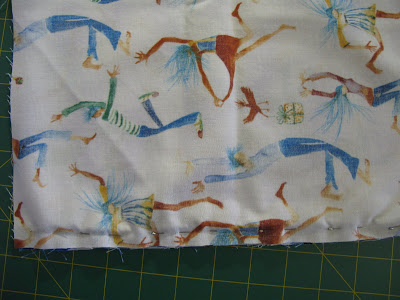 With right sides facing, pin both pieces of material together. Carefully line up the edges of the material. Pin, tack by hand (large stitches) and remove the pins. The piping is sandwiched between the material.

Sometime I combine Steps 4 and 5:
- With right sides facing, pin the material about 3 or 4cms from the edge. This is basically just lining it up and making sure the material doesn't move as the piping is put in. Insert the piping between the two layers of material, pin, tack by hand (large stitches) and remove all pins.

This is going to be a little drawstring bag for a child. I've used a blue material to pick up the blue colours in the main material. The piping is the same colour as the lining and handles on the bag.

The lining, handles and drawstring casing are done. It's just waiting on the drawstring to finish it. I'm going to use a blue as close to the piping colour as I can find.  I'll post a picture of the finished bag once it's finished.

Edited: You can see the finished bag here...
Email ThisBlogThis!Share to TwitterShare to FacebookShare to Pinterest