When I was first married, with the help of my father, I purchased a Lemair Helvetia sewing machine for the princely sum of $100. It was a lot of money for us at the time. It was very basic and could only do a straight stitch and zig zag, but I certainly got my money's worth out of that machine.
A few years ago, I inherited my mother-in-law's Janome. My mother-in-law was a talented sewer, who used to draft her own clothes' patterns; something I can only dream of. The Janome was certainly a step up from my old Lemair and much lighter to carry, too. This machine now resides at my daughter's place, waiting to be used. She is quick to tell me that I haven't spent the time to teach her how to sew and this is very true. It always seemed easier to do it myself, rather than spend the time to impart the skills. I am hoping to rectify this situation and I know my mother-in-law would have been chuffed to know that her grand-daughter was using her old machine. 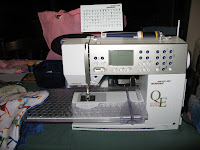 A few months ago, I spent some money and upgraded to a Bernina Aurora 440QE and am so pleased I did. It is a dream to sew with! Over time I will learn to use all the features. Initially I thought it was just wonderful that there was a button to make the needle go to the up and down position. How cool is that! When I press the wrong button and am not sure what I have done, all I need to do is turn it off and on again and the machine is reset. The oil light appeared last night. This is the second time since purchased, which means that I've done 360,000 stitches. 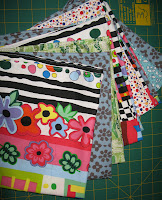 My first project with the new toy, was to sew some bandanas for a group providing hats, bandanas and beanies, to children who have undergone chemotherapy. This was a really easy task, but one I enjoyed. As the bandanas are for kids, they only require a 19" x 19' square of fabric. Hem the sides and they're done. As time permits, I'm hoping to sew more of these.
The Bernina performed as I expected: beautiful stitches, no tangled thread and lovely neat corners. 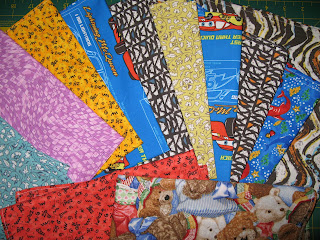