What would you do if presented with a jacket sporting a rather large hole in the elbow? Look at the size of it!!! I posted a photo on Instagram a couple of months ago, wondering if it was worth the effort to mend. 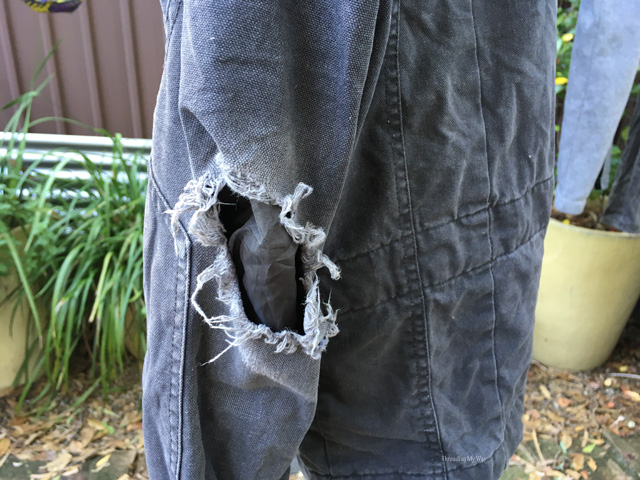 No good donating it to an Op Shop (thrift store) - it's not good enough to sell and so it would be destined to end up as rags. Apart from holes in the elbows, the jacket is in good condition, so I don't want to deconstruct it and salvage bits and pieces. And I can't consider leaving it as is if it's going to be worn.

The only option left is to mend it! 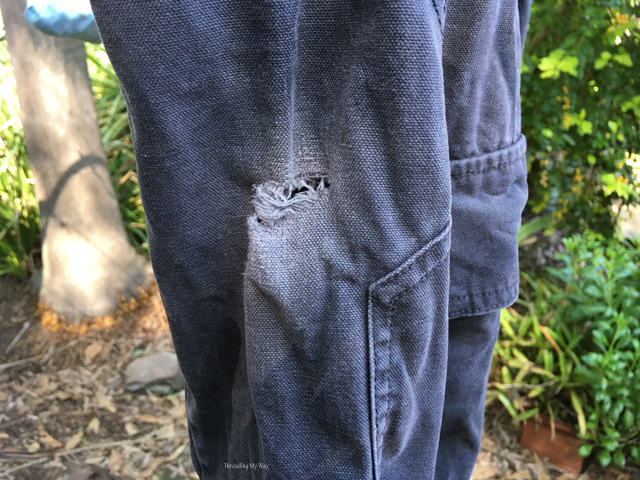 Here's the hole in the right sleeve - quite respectable really, when you compare it to the left sleeve.

I'll show you how I darned the elbows, making the jacket wearable again. I'll also point out how to do a much less obvious repair if you are ever faced with mending large holes in a garment. 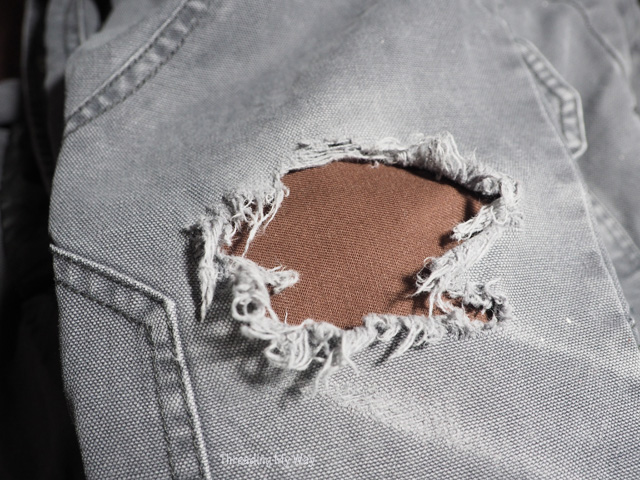 Place a piece of fabric between the lining and the external fabric. Match the jacket fabric as closely as possible, unless of course, you want the patch to stand out.

You might wonder why I chose brown fabric - not the best choice. The only grey fabric I had was quilting cotton and I wanted a sturdier material. In retrospect, I could have doubled the quilting fabric and it would have been fine, but I didn't think of it at the time.

Pale blue jeans or black/grey stone wash denim would have been an OK choice, too - much better than the brown, but again, it didn't occur to me when I was fixing the holes.

For detailed instructions on how to attach the patch and darn, see my tutorial - How to Repair a Large Rip with a Sewing Machine.

If repairing jeans or a garment with thick fabric, use a jeans needle,

Because the hole was so large, I left the frayed bits, spread them out, and sewed over them. 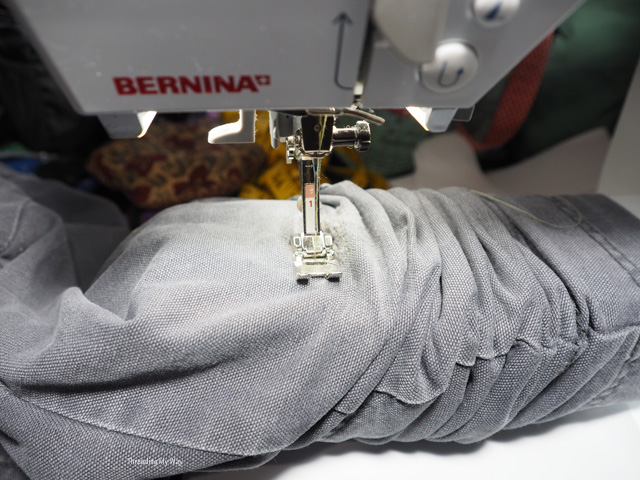 Place the sleeve over the arm of the machine and stitch back and forth - over and over. The patch is held in place with tacking stitches while sewing, so no pins. Don't worry about straight lines. You're after a distressed look. 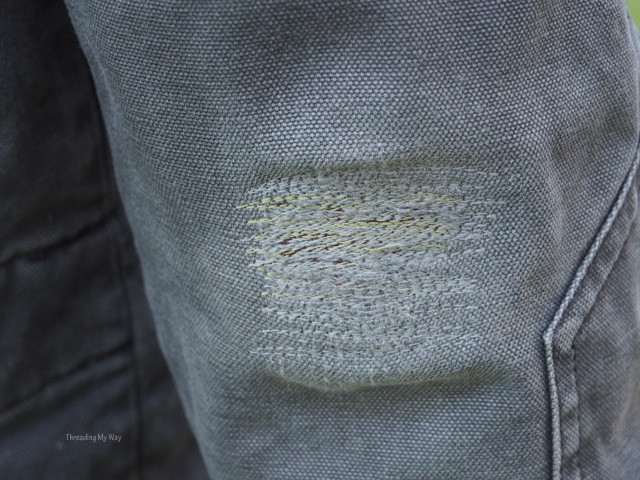 Here's a close up of the smaller patched hole. #2 way for a less obvious repair - match thread colour. I initially went with the olive green thread that was already in my machine. Part way through I decided against being so lazy, and changed to a grey thread. 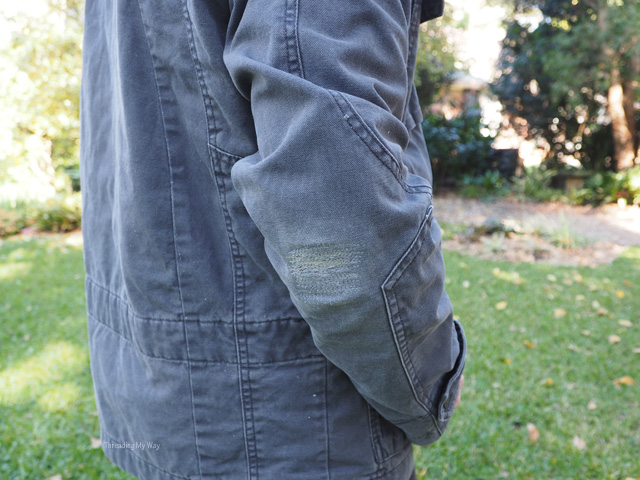 I'm quite happy with this repair. Close up, you can see a little brown, but not enough to worry me. 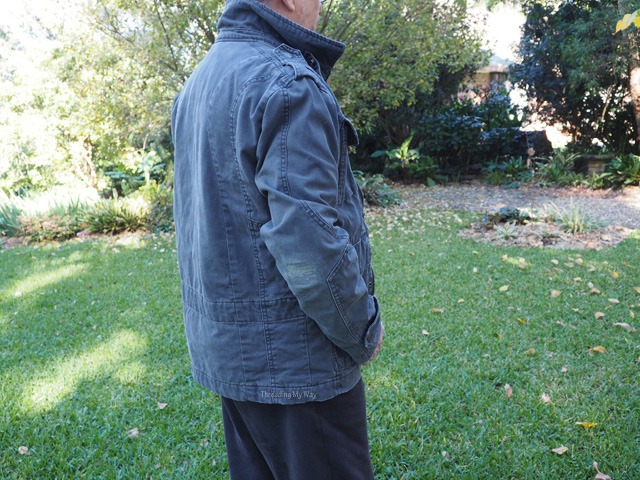 And from a distance, it just looks like distressed fabric. 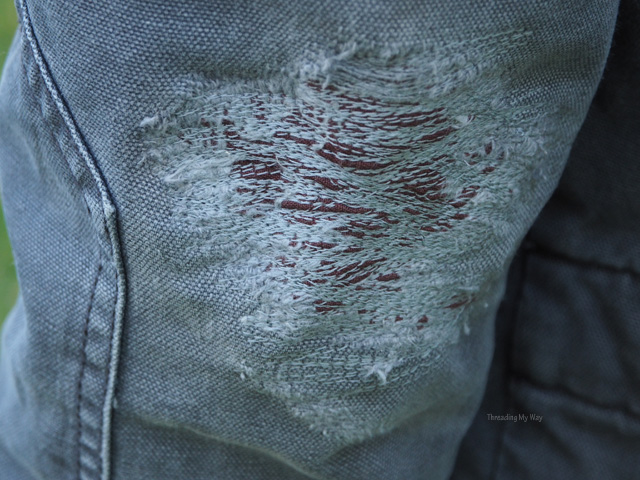 The larger hole, I'm not so happy with, due to the brown - there's too much of it. If I'd kept sewing, the brown would have almost disappeared, but I'd had enough of going back and forth, back and forth. 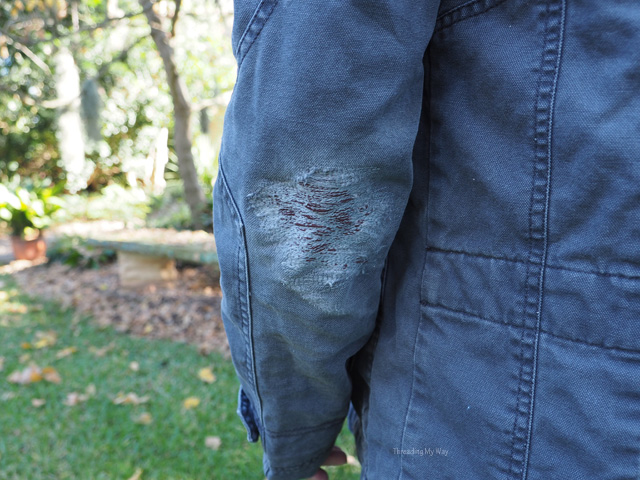 Match patch and thread colour to the garment colour if you want a less obvious patch!!! 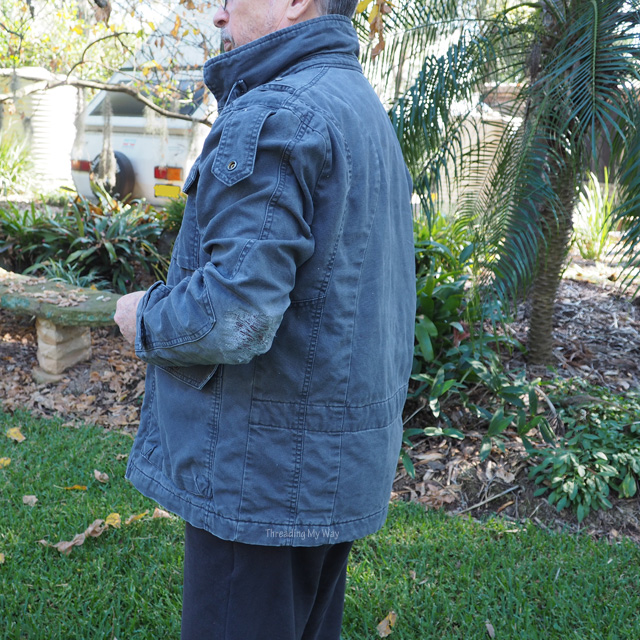 It's still acceptable, just not as good a job as it could have been.

Mr TMW, who has inherited the jacket, is more than happy with his new garment. Truth be told, I don't think he was too worried about the holes. 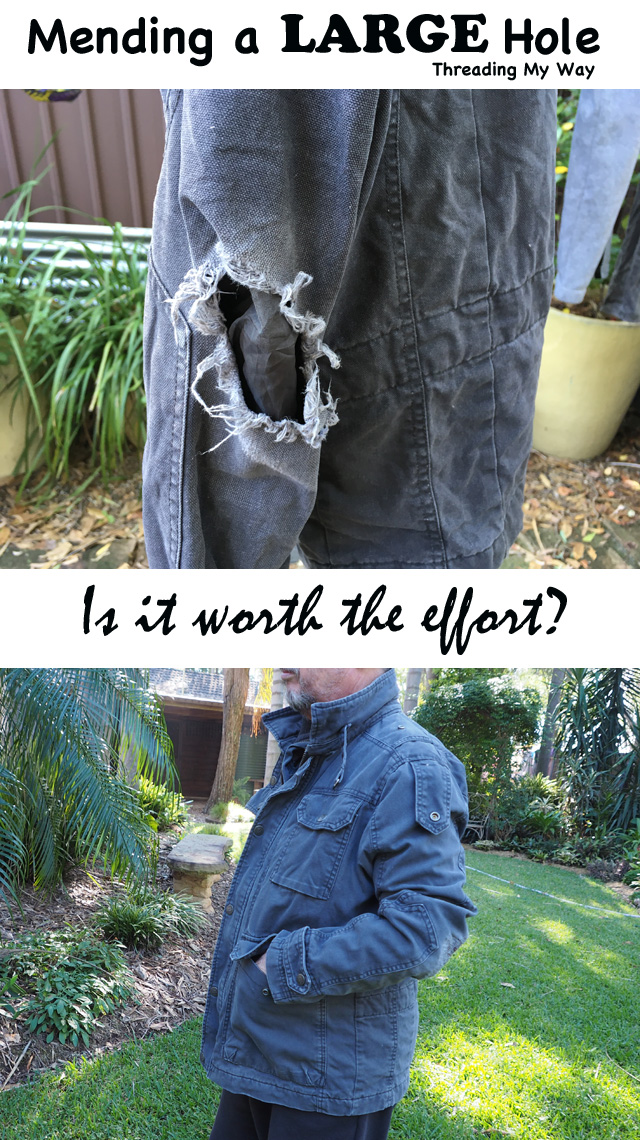 The tutorial detailing this technique - How to Repair a Large Rip with a Sewing Machine, attracted a lot of attention. Amongst the comments were some helpful suggestions that you may like to try when faced with a similar mending job...

Sometimes the comments are just as valuable as the blog post itself.

I'll leave you with one more comment which I love...