Container Planting in a Large Garden

In less than two weeks, it will be Summer - the hardest time in our garden, due to the heat, dry weather and strong winds. Time to show you around while the plants are at their best. 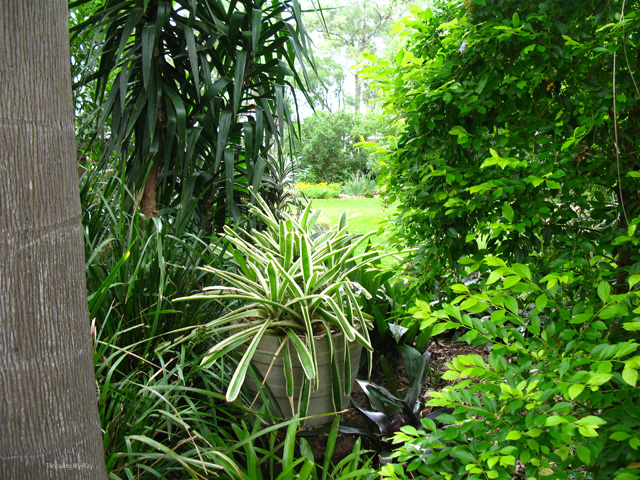 Even though I have extensive gardens, there's still room for plants in containers. Today I thought I'd show you how I've integrated some of them into the gardens.

The bromeliads above are sitting in a large, rather plain, concrete pot, which is sitting on a tree stump. Initially I was going to paint the pot, but as soon as we put it in this spot, we knew it was perfect as is. 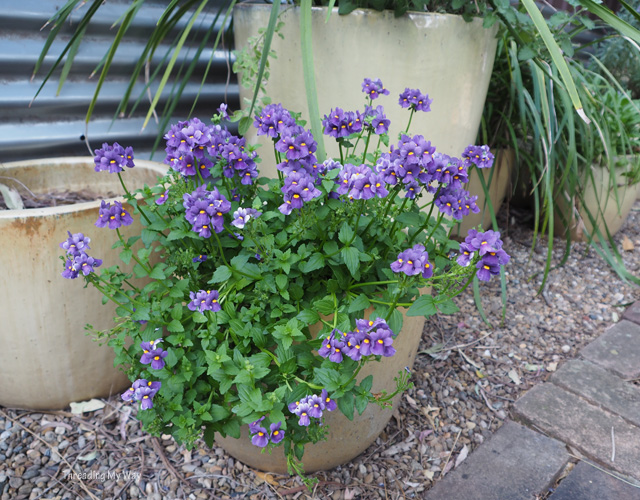 Between the clothes line and the large shed, there's a narrow spot that's filled with different sized pots, all with the same coloured glaze. It would have been cheaper to dig a garden, but the pots work well. 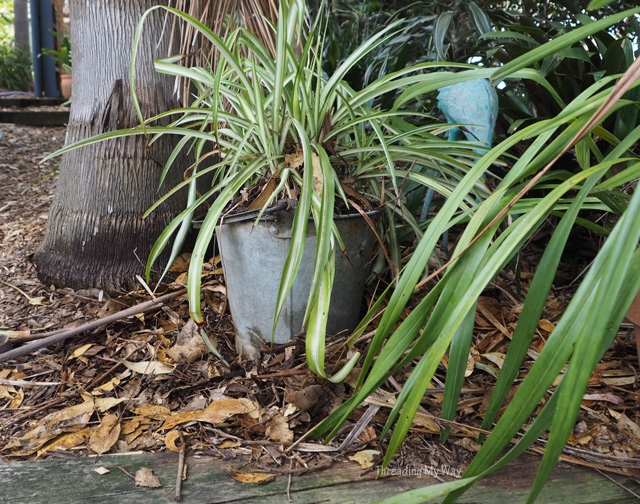 An old metal bucket sitting in the garden, is filled with a spider plant. Looks rather good, doesn't it. In reality, though, it's totally root bound and needs repotting.

Sitting on the ground, I'm not sure how long it will last before the bucket rusts. In the recent past it's always been above ground on shelves. 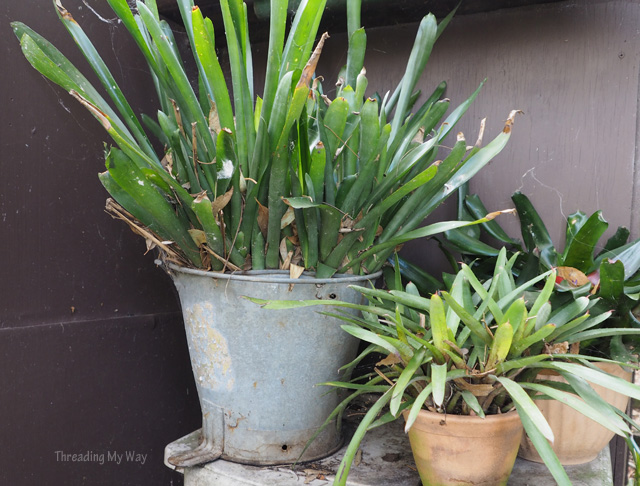 A similar bucket, sits on a rather ugly shelf. Mr TMW is going to put up a wooden shelf for me. Must remind him! This bucket must have originally been a mop bucket, with the metal part sticking out being the bit you put your foot on - or so I'm assuming. 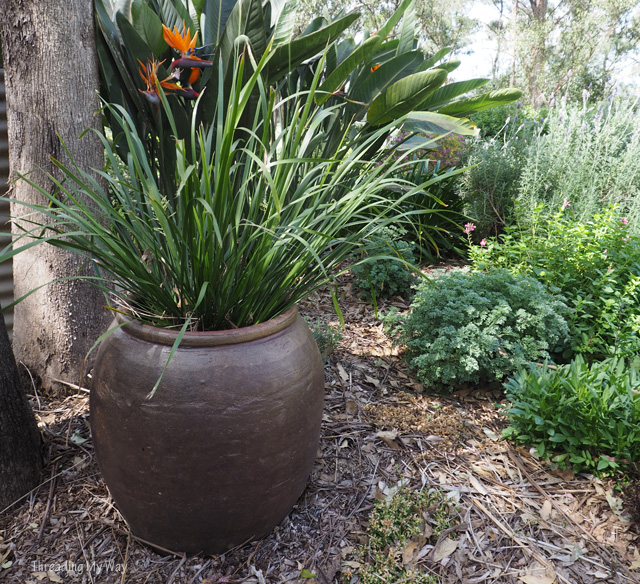 We have two of these urn type pots. When we purchased them, they were sold as water features, but we've always put plants in them. Mr TMW drilled holes to allow the water to drain freely.

Finding the right plant for each pot sometimes takes me a while. Think I nailed it with the native lomandra - suits the shape of the pot. 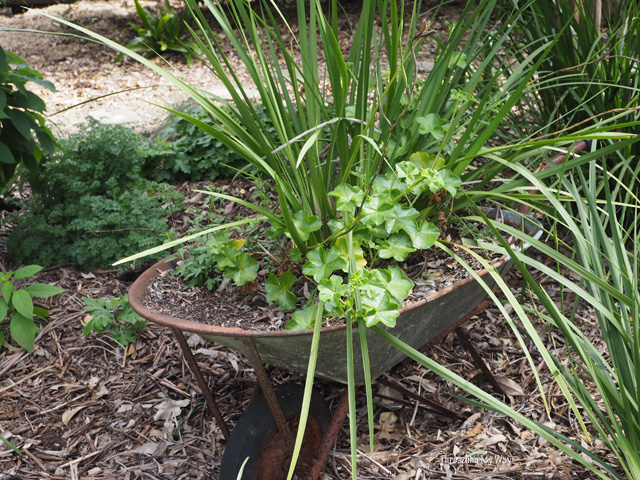 I've shown you my wheelbarrow planter before. One day we're going to find it all collapsed in a heap due to the ever growing rust.

Situated in a sunny part of the garden, the ivy geranium, dietes and erigeron stand up to the heat well. 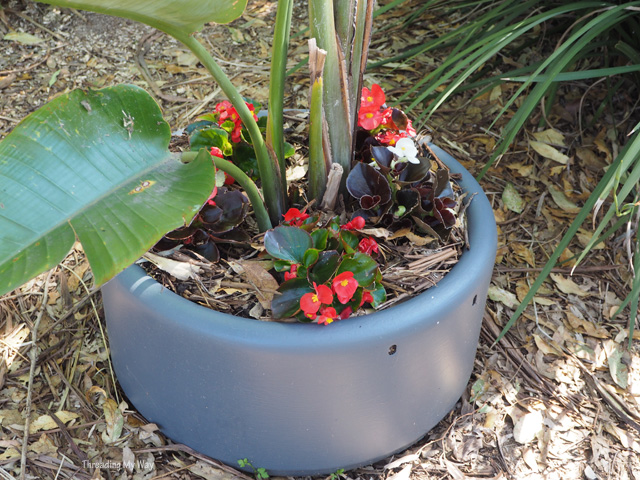 The next two pots began life as enamel washing machine bowls. With a coat of paint on the outside, they make lovely large planters.

Both pots contain giant bird of paradise plants, which become very large when planted in the ground. So far they're doing well in the bowls. The bedding begonias add a touch of colour... 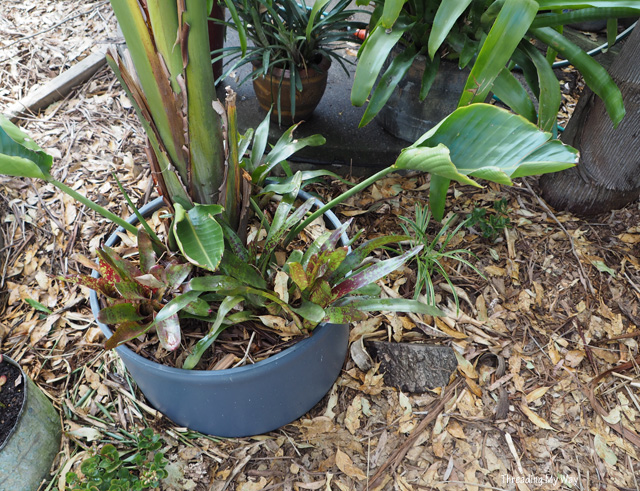 ... with dwarf bromeliads in the second.

The round concrete  envirocycle (for treating waste water), is partially disguised with more bromeliads in pots. 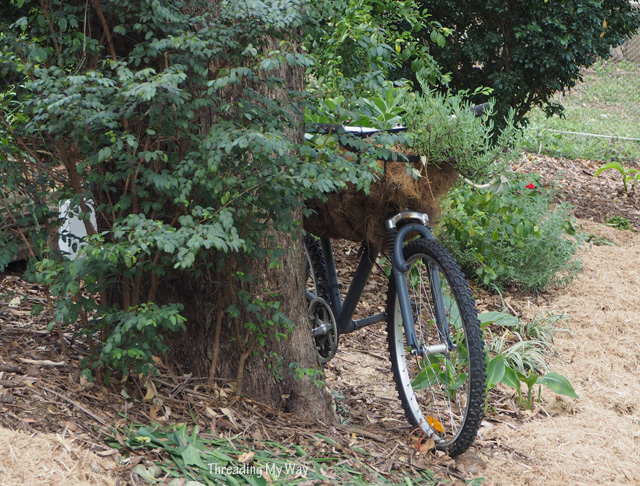 A splash of paint has prevented an old blue push bike from ending up in landfill. Mr TMW added three baskets, which are now full of succulents.

There's another bike waiting to be recycled, too, most probably in the same manner. I haven't picked out the right spot to put it yet. In the wrong location, it just won't look right. 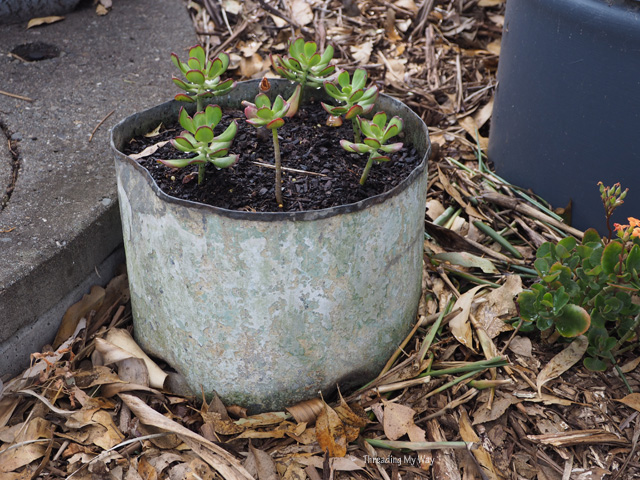 I have no idea what this metal pot was originally used for, or how old it is. At the moment it houses a few succulent cuttings. Not sure whether I'll keep them, or replace them with something else.

The vast majority of my pots are dotted around the place, in amongst plants in gardens. 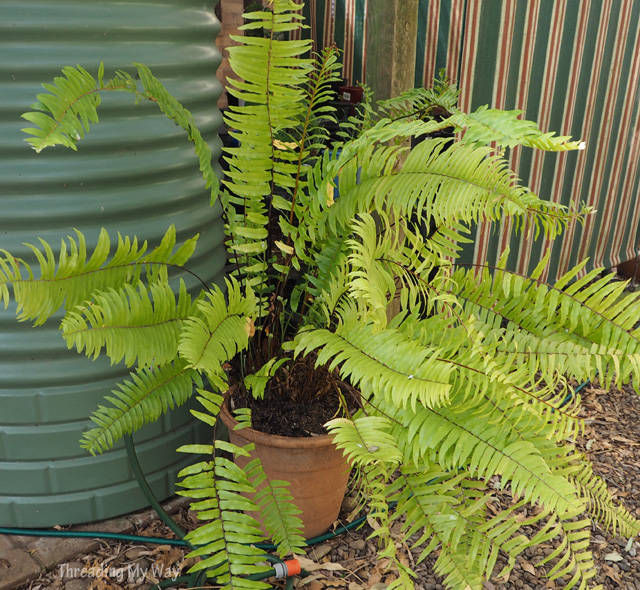 And just to contradict that last statement, here's one that stands by itself - a terracotta pot with a large fern.

Our garden is continually changing and evolving. Just like sewing, it's a creative process, getting the right sizes, shapes and colours to work in the overall design.

I know many of you enjoy gardening in your corner of the world and you've told me you love to see gardening posts. For those of you who are not so keen on gardening, I hope you've enjoyed looking at my photos, knowing you didn't have to get down and dirty.