Winter Down Under ~ A Tour of Our Garden

Its officially Winter in Australia. We've had a few cold (for us) days, but the last week has seen balmy temperatures in the low 20ºCs (68ºF) in the middle of the day - getting down to 3ºC (37ºF) at night. It will get colder than that, but nothing like the temperatures many of you experience in the Northern Hemisphere.

There are parts of Australia that get snow, but not where we live. For me, that means gardening is a year round activity. In Summer I garden early in the day and towards the evening, whereas in Winter, the middle of the day is a more comfortable temperature.

Each Winter I plant daisies in memory of a friend. Although not a gardener, they were her favourite plants.

Naturally, being Winter, there are fewer plants in flower. Sometimes, as a bit of a luxury, I'll buy potted colour - plants grown to maturity and in bloom. Even if they only last a season, I figure they're cheaper than a bunch of flowers, and will give many more blooms.

Case in point - the yellow and orange plants above. I think they are calendula, but am not sure. Can anyone help me with a name?

I just adore this little jellybean succulent, growing in a pot that used to belong to my parents. It's one I can remember as a child in the home where I grew up. 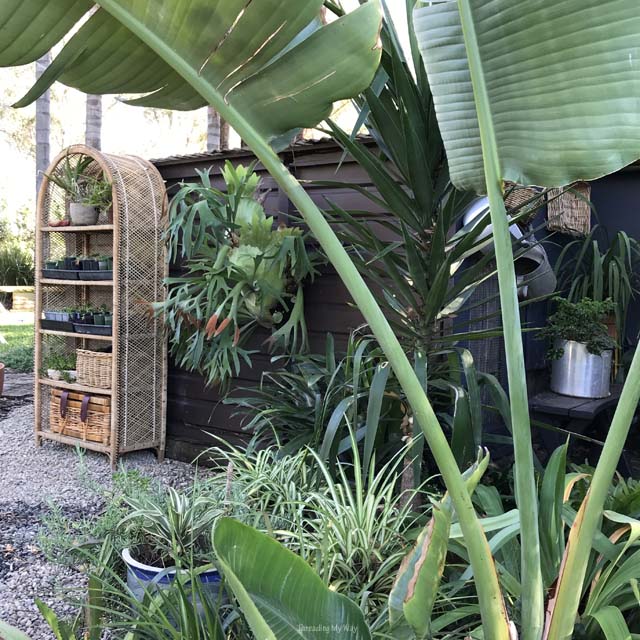 The jellybean succulent plus pot is now situated on the cane bookcase. We've had that bookcase inside for years. I got sick of dusting it, so thought I'd experiment with it outdoors. Being cane, it's not going to last indefinitely, especially given that little plastic pieces holding the weaving together had already started to deteriorate inside. However, I'd rather it get a few more years outside, than send it to landfill now.

This magnificent elkhorn used to belong to my late father-in-law. I think he'd be happy with how I've looked after it.

We have quite a few cocos palms. Whilst I don't like their invasive roots, I do like the mulch they produce when Mr TMW puts them through the shredder. It's the best mulch ever!

It can be hard to find the right plants to grow underneath in competition with the roots, but I've found that both bromeliads and aspidistras do well.

Matter of fact, I have bromeliads dotted everywhere around the garden. They require little water and are quite spectacular when they flower. This pink one is a favourite of Mr TMW.

Many moons ago, Mr TMW purchased a matchstick bromeliad, instructing me to stay away. Ha, ha... the original is still there, but I've divided it so many times. In retrospect, he's glad I didn't listen to him.

Our garden is a mix of styles where ever you look - cottage garden, Australian natives, succulents, you name it. In the picture above - exotic geraniums planted under native Australian lilly pillies, next to aloe vera.

Just as white space is an important feature when designing a web page, or magazine, so is bare space in a garden - at least, that's how we've done our garden. Jam packed in some patches - sparsely planted in others.

And to finish off the tour of part of our Winter garden - behind this large pot is an Envirocycle, our waste water system. The large concrete tank is covered in pots. Yep, if the system needs checking, they'll have to be moved. In the meantime, they transform an ugly, but functional, eyesore, into something pleasant to look at.

This last photo was actually taken last month, in Autumn, but looks exactly the same now. It's an old metal washing machine insert that came from the home where I grew up. All I did was add a couple of coats of outdoor paint.

If you think you've seen some of that last photo before, you must be following along on Instagram - that's where I show lots of photos of the garden, along with places we visit and the odd sewing photo.

If you've enjoyed looking at our garden, you might like to see garden photos taken at other times of the year.

I'm off to bed soon, and am crossing my fingers that I get to spend three uninterrupted days outside in the garden. What are you up to in your little corner of the world?