This month, I'm joining in with Kristy, over at Hopeful Threads, sewing bloomers for children in orphanages and foster care in China. The bloomers, in solid colours, are to be worn with dresses, during the Summer months.

I first heard the term, bloomers, when I was about 9 or 10 years of age, in sewing class at school. There were suppressed giggles around the room as Mrs Club described the pattern we were going to draft. We all had visions of the HUGE underpants that we imagined our grandmothers might wear, but NOT US!!! I have no idea whether I successfully drafted the pattern or whether I actually made any bloomers, but I most definitely did not wear what Mrs Club was proposing. Perhaps I can blame Mrs Club for my reluctance to attempt to draft my own patterns, even to this day.

Several years later, when I attended High School (beginning at age 12), our Physical Education uniform changed from shorts and top, to a very short dress and.... bloomers. This time, however, they were vastly smaller than my first encounter. They were still, however, made of a very, thick, cotton fabric and not particularly attractive to teenage girls. The upside was that they were totally practical, adequately covered what they were meant to cover and everyone else was wearing them... at least, all the girls were wearing them. So, for the next six years, I wore bloomers with my PE uniform. My mother (who reads this blog... hi Mum), would have sewn those maroon coloured bloomers along with the PE uniform. 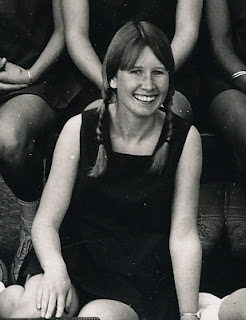 Ha ha.. the pic shows me in that PE uniform, at about 16 years of age. Thankfully, the bloomers are hidden. During those years, I played tennis and later squash, outside school. My preference was always to wear shorts and a top, but when I wore skirts, I also wore stretch, sports pants. Bloomers were strictly for school, when we had no choice.

So, when I saw Kristy's monthly project announcement, I laughed at the memories which came flooding back, of Mrs Club and those HUGE bloomers.

Kristy suggested we use a shorts pattern and modify it. Once again, I have used the 30 Minute Shorts pattern, purchased from Create HOPE Designs. I added half the length of the boys extension cuff to the legs and instead of 1/2" elastic at the waist, I've used 1/4".

The brief was to use solid colours. I really had to resist the urge to make them in a pretty print, but resist I did. Just as well, because they are to go with specific uniforms. I have used cotton fabric, but a light poplin. And, to make the bloomers a little more girlie, I've used shirring around the legs. You may recall I used shirring on Lucy's Little Flower Dress and how keen I was to do shirring again. As well as looking great and being comfortable, I just love the way the shirring elastic shrinks when I steam it. 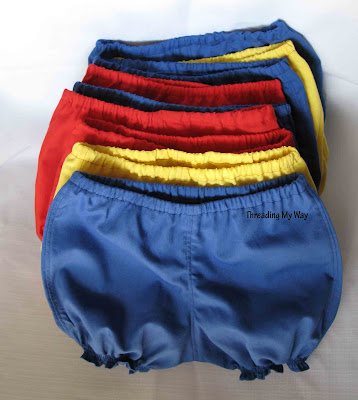 I don't think these bloomers are anything like the bloomers of my youth. In fact, I think they are quite sweet. I've seen the bloomers Kristy has made and they are cute as.

According to the Macmillan Dictionary Thesaurus, bloomers are an old fashioned piece of women's underwear that is loose and covers the area from the waist to the knee. This is exactly the image that Mrs Club's sewing lesson evoked. Perhaps all I need is a name change...

This brings back memories of another under garment worn with our high school uniforms... witches britches. These were worn against the wishes of the school authorities, but wear them we did. It was the era of the mini skirt. School uniforms were a regular length, but they came with belts. We, of course, hitched our dresses up over the belt so they were rather short. During winter it was cold and so we wore witches britches for warmth and yes, I suppose a bit of rebellion in there as well. The witches britches were designed to show, but we could quickly adjust clothing so they didn't show, when required.

Oh my!!! What a fashion that was!!! And we thought we looked cool.... LOL!!! Thankfully, that was a fashion which didn't last. And thankfully, there are no photos of me in that fashion. Ah, but I do have one of my sister. Hmmmm.... my life wouldn't be worth living if I were to show that photo. Don't worry, Sis, your photo is safe with me!!!

I really have digressed here!!! But, hey, I've had fun reminiscing. Head on over to Hopeful Threads, and read about the wonderful work that Kristy does. The world is a much better place, thanks to people like Kristy. I look forward to seeing what next month's project is Kristy...

Have you had a look at our three ongoing link parties? Head on over for lots of fabulous ideas and inspiration. Link up your bags and dresses...

Master list of ongoing link parties at Threading YOUR Way with Threading My Way
... Pam
Email ThisBlogThis!Share to TwitterShare to FacebookShare to Pinterest