Do I Really Need All This STUFF?

Decluttering is an often used word nowdays, but what does it actually mean? According to the Oxford dictionary:

Decluttering: Removing unnecessary items from (an untidy or overcrowded place).

Unnecessary: More than is needed; excessive.

Like most people in the Western world, I have many, many more possessions than I require. Should I join the trend and get rid of everything I have that is just a want and not a need? What does this picture tell you? Ha, ha... yes, I shop at Spotlight sometimes (equivalent to Jo-Anns). Even though I don't like to admit it, I do sometimes accept plastic bags at the checkout. There's a set of reusable bags in the car, but try as I might, I don't always remember to grab them and actually take them inside the shops.

Whilst I admire those who live a minimalist lifestyle, I don't know that I could give up all the luxuries that I take for granted. My computer - I couldn't live without it, but perhaps I don't need the latest and biggest. The TV - yeah, I would happily not have one, but Mr TMW wouldn't see it the same way. My iPhone - too handy to ditch, but I'm not racing to upgrade my old 3G, as it does the job.

Electronic devices are a big environmental problem, but they are now such an integral part of our lives. Consumers rush to buy the latest and greatest, so of course, the manufacturers are going to supply that demand.

When we were kids, technology moved at a much slower pace. My parents had a large radiogram, that enabled us to listen to the radio and play 78s (records). Much later on came one black and white TV, one portable radio and also a record player for LPs, EPs and 45s. When we were teenagers we given our own trannies (transistor radios) and had the use of a tape recorder to copy songs from the radio.

And a phone, yes, my parents got a phone when we were in our teens.  That phone was of course a landline attached to the wall with a cable long enough to enable the phone to be taken around the corner and into the bathroom, so we could have some privacy while ringing friends.

Those single items were the extent of technology for the first twenty years of my life. Things were made to last and we were not bombarded with ads telling us what we were missing out on.

Don't get me wrong - I don't want to go back to those years, but my childhood years were not ones of keeping up with the Jones. Yes, I wanted a tranny when my friends had them, but that one treasured little radio lasted me for all my teenage years.

I'm sure lots of nasties went into the production of the electronic gear back then, but there just wasn't the same volume as now. 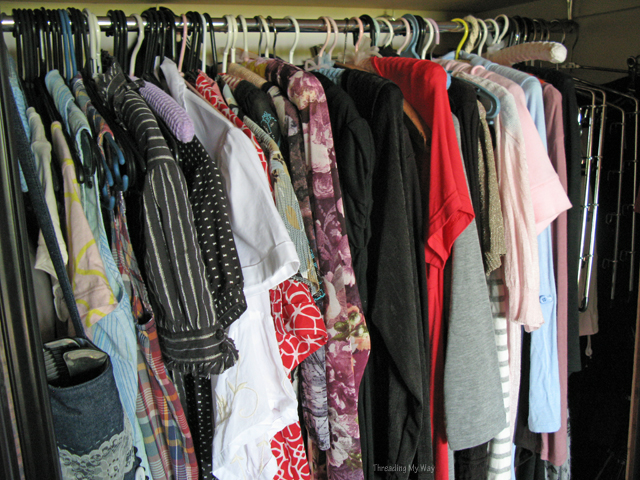 I had no intention of talking about electronic items when I began this post, so let's get back to my original plan.

I have slowly begun to give away things I no longer use - mainly clothes and linen. Seriously, there's enough woollen blankets in this house to keep several large families warm. I find it hard to get rid of things - I keep them, just in case. There's this feeling that it's wasteful to get rid of items that I may have to re-buy at some point in the future. I've lived long enough to see many fashion trends reappear decades after they first appeared.

Thing is, do I really have to keep up with the fashion? No!!! I've decided that it's time I dressed to suit my figure and to develop my own style. Enough of others dictating what I'll wear. Sure, if I like the fashion and it suits, I'll adopt it, but not otherwise.

The photo above shows half of my wardrobe AFTER the latest cull. I've found that it's useless to try to do it all at once and so I've been reducing the number of clothes for a few months now. When I began, the coat hangers were jam packed together. 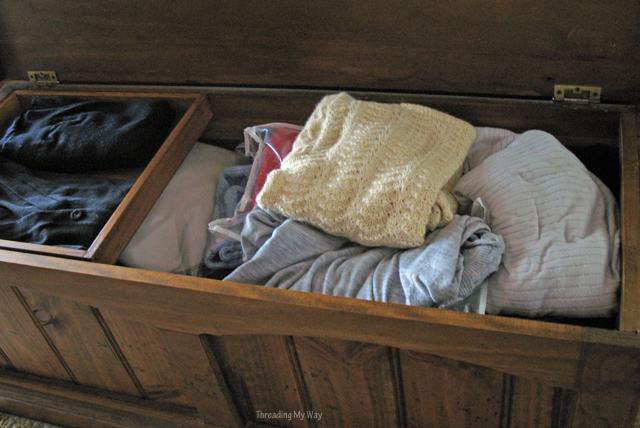 Yesterday I attacked the blanket box which contains all my knitted tops. There's jumpers and cardigans in there that I haven't worn for many, many years - beautiful woollen jumpers.

Why do I keep them when I don't wear them?
I was keeping some things simply because I liked the way they used to look. Thing is, I no longer have clothes to match them with and so they sit there.

Well, yesterday I was ruthless. The photo below shows the pile I'm donating to an Op Shop. OK, so that teal one on top is 100% wool and I love the colour, but I've only worn it once or twice because it actually doesn't look good on me. The two pure wool, cable knit cardigans top right - yes, lovely and warm and I love the wool, but they just don't fit under any of my coats, as they're too bulky.

They're all bagged up ready to donate. The top photo of items to give away was taken before the knitted garments were added. There's a few long, slimline cardigans I've kept that I ummed and arred about. Maybe they'll go with the next cull, but for now, I've freed up heaps of room in the blanket box.

It feels good to be able to see at a glance what's in my wardrobe, drawers and blanket box. Who knows why I call it a blanket box when it doesn't contain blankets. 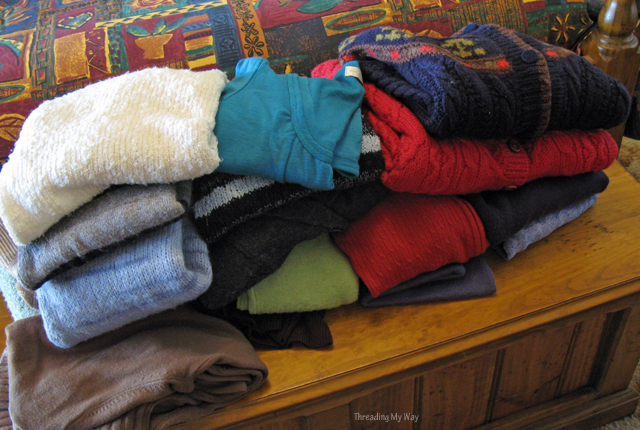 In recent days I've also been through the linen cupboard. Several of those blankets will now be able to keep needy families warm in the coming Winter months. The spare room has had a good clean out, too, as has the kids' dress up box. Lots of the dress up clothes were old clothes to start with, and some have now been cut up to use as rags.

So far I haven't missed anything I've given away in the past, and I'm almost certain that will be the case this time. It feels good. There's space in cupboards and drawers and I can see under the bed in the spare room. Means I'll be able to vacuum under there.

In the past I've culled clothes as an excuse to buy more, but not now. Sure, I'll buy more clothes in the future, or maybe even make some, but I'm hoping to do away with the buy, buy, buy attitude. Just because I like it doesn't mean I HAVE to have it. 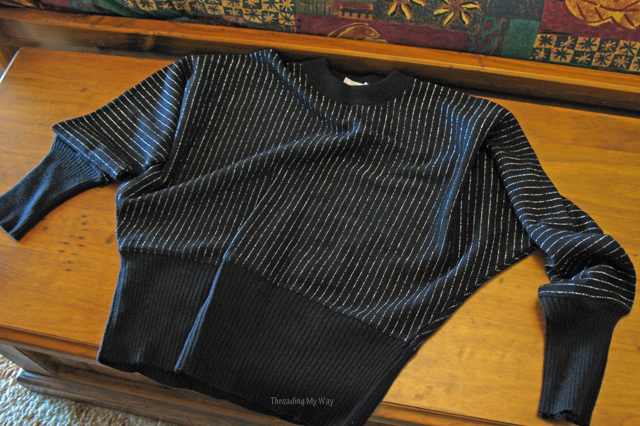 I have kept some things for sentimental reasons and that's good, but there's a limit. The batwing top will remain in my possession until the day I die, even though it hasn't been worn for a while. It's a bit hard to see, but the stripe is a silver and I mainly use it for evening wear. Yes, it's old fashioned with the batwing sleeves, the long cuffs and the wide waistband, but you'd expect a garment made in the 1930s to be a little dated. It belonged to my Godmother and she would have loved to know I still have it. Maybe I just need to update my black pants to suit the top.

I think the hard thing is knowing where to draw the line. It's OK to have items that are not needed - little luxuries add something to life. Funny thing is, when there's too many luxuries that are taken for granted, they stop adding to life and actually start to detract.

I'm going to continue to declutter, bit by bit. Maybe I should tackle my sewing room next. Hmmm.... that's a hard one.

If you are looking to declutter, 10 Creative Ways to Declutter Your Home may help. I haven't followed the links and haven't used anyone else's method myself. I started small and found that with each cull, I was prepared to let more go.

I'd love to hear your thoughts or reactions to this post...