This month I've joined in the I Will Wear it in Public Garment Sewing Challenge, hosted by Rikka, from Ricochet and Away. This challenge was just the motivation I needed to make something for me.

Not long ago, I said that I would make three tops for myself before the end of the year. Originally, I thought that my first top would be made as part of the I Will Wear it in Public Garment Sewing Challenge. Somewhere during the month, I totally changed my mind and decided to make myself a pair of pants to wear to Zumba.

I knew exactly the design I wanted. I already have a couple of pairs of Lorna Jane 3/4 Flashdance Pants. However, as it's nearly Winter here, I wanted my new pants to be full length. 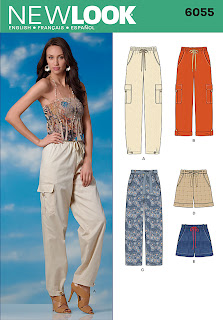 New Look 6055 was as close as I could find to the pants I wanted. Obviously I wouldn't be wearing my new pants with high heels. I found a black stretch cotton poplin, made from 95% cotton and 5% spandex.


The first modification I made to the pattern was to add knee pleats for ease of movement. This simply meant adding four small pleats at the knee: two on either seam at the front. 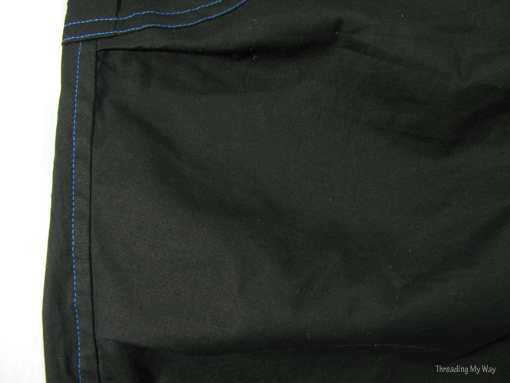 Next up were the pockets, where I added a line of blue topstitching. When doing the first pocket, my machine skipped a couple of stitches. Had I been using black thread, it wouldn't have been seen, but being blue, it was very obvious. I already had a ball point needle as the fabric was slightly stretchy. When sewing with bias binding a while ago, readers related experiences of changing the needle fixing a myriad of problems. So I changed the needle to a new ball point and the problem was fixed. 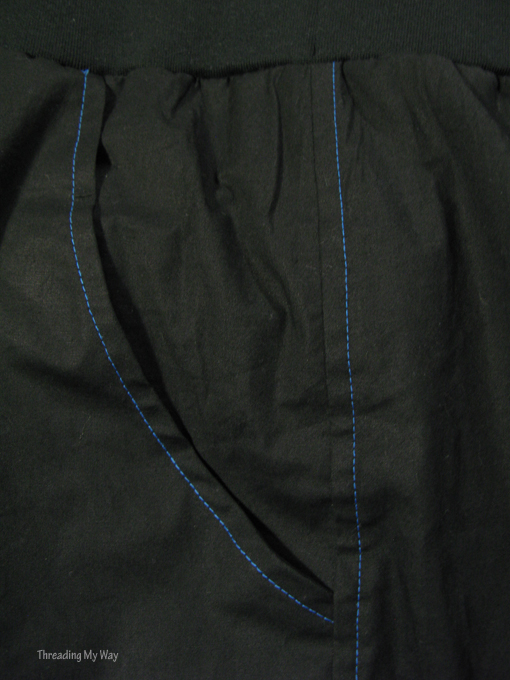 Part of the sewing challenge was to attempt something new to us. My flashdance pants have flat felled seams, so of course I wanted these on my new pants. This was perfect, as I had never attempted flat felled seams before.


The New Look pattern used a regular seam. I have no idea what you call the seam that is most used on garments. Can anybody help me out with the correct name?


A quick Google search and I found a great tutorial by oliver + s. Flat felled seams appeared to be easy enough to do. Begin by sewing a seam with the wrong sides of the fabric together. Why did I then sew the fabric with right sides together? Of course, I sewed the length of the leg before I discovered my mistake. Hmmm... black thread on black fabric at night is VERY hard to unpick. I was too impatient to wait till daylight, so I decided to have my flat felled seam on the inside of the pants, instead of the outside. And it worked!!! It looks fine and as the fabric is thin, it's not noticeable when wearing.


Having done one flat felled seam on the inside, of course meant doing the other leg seam the same way. I still hadn't successfully mastered a new technique. When it came to sewing the two fronts together and the two backs together, I made sure I sewed my flat felled seam, beginning with the wrong sides together... a successful flat felled seam. 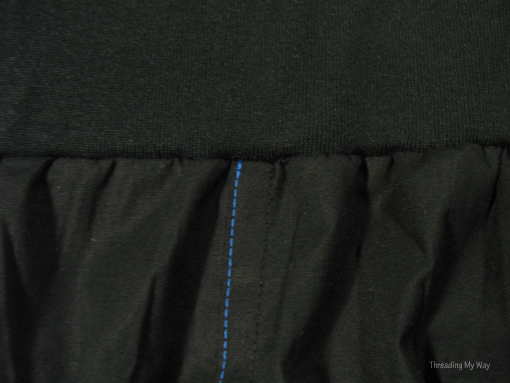 The next modification to the pattern was to add a waistband from stretch ribbing and elastic, instead of the same fabric as the rest of the pants.


I also added a band of stretch ribbing to the bottom of the legs, instead of sewing a cuff with a button, as in the pattern. 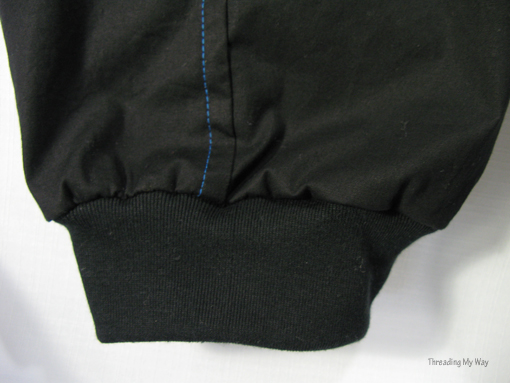 I was a bit lazy and didn't add a flap to the external pockets. 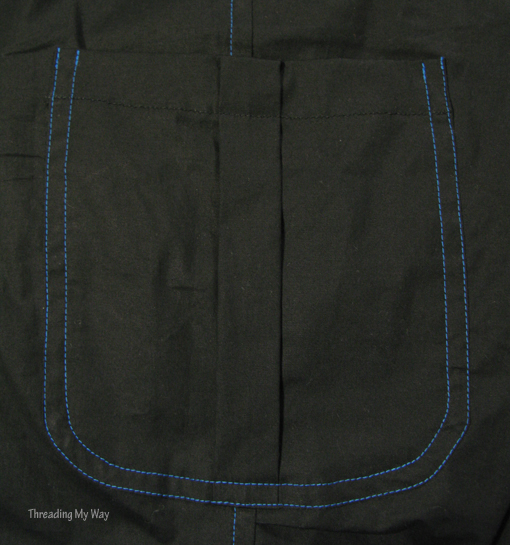 I wore my pants to a class this afternoon. So... I have worn my garment in public. We had fun taking these shots before the class. 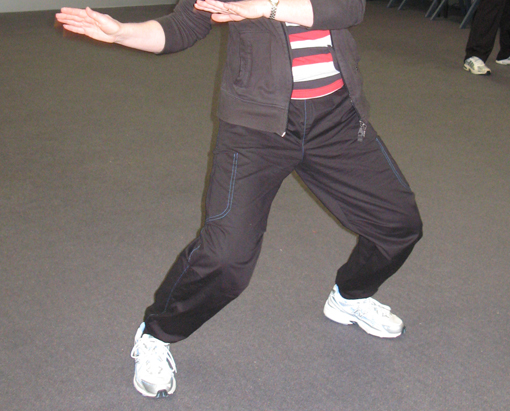 These are the most comfortable pants I have worn to Zumba. However, I'm not totally happy with them. When I first put them on at home, my immediate reaction was... clown pants. Compared to my old pants, they felt and looked too large, both width wise and from waist to crotch. Folding the waistband over has solved the latter problem and funnily enough, it hasn't altered the comfort. 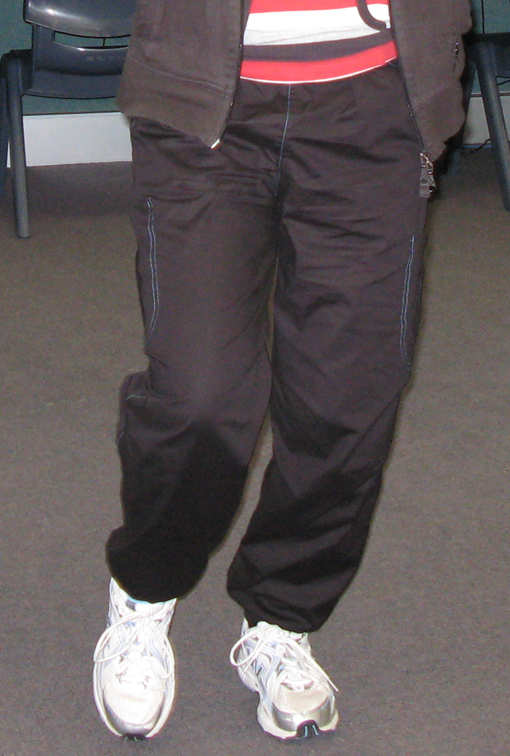 Before cutting my fabric, I took my measurements and chose which size to make accordingly. I'm usually quite lazy with multi sized patterns and just fold the tissue paper to the correct size and pin it to the fabric. This time I decided I'd transfer the tissue paper pattern to a thicker paper in my size. I don't remember where I saw this, but I put the tissue paper on top of my paper and used a pin through the tissue to mark the cutting line. Worked like a charm. 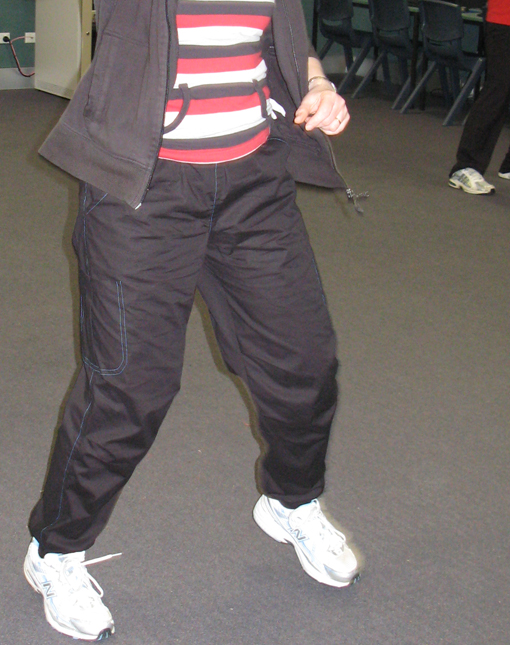 Once I had my pattern cut out, I measured it against my old pants. Allowing for seams, it appeared like the sizing would be OK, except for the length, which is always too long. I adjusted the pattern and set off sewing. 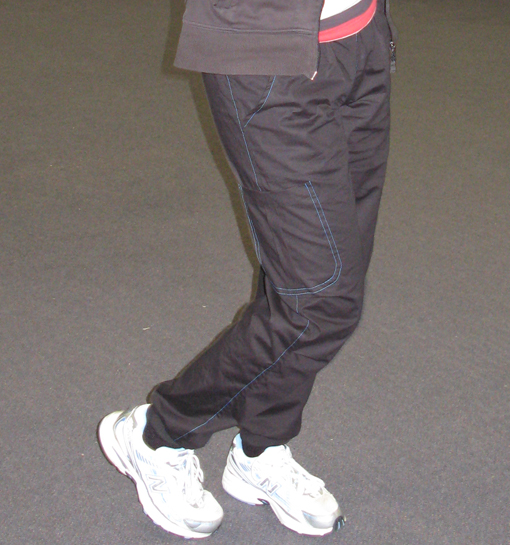 Well... something went wrong, because the pants are much wider than expected and the waist to crotch was way out. Perhaps it's just me comparing them to my old pants. Perhaps they're meant to be that wide. Next time I will go down two sizes and there will be a next time, as I purchased enough fabric to make another pair.

Since returning to sewing in recent times, I've found that any patterns from Simplicity, Butterick, etc are all sized too large. However, as I'd taken my measurements this time, I thought I'd be OK. When I sewed for myself many years ago, I didn't have problems with the sizing of patterns. How do you find pattern sizings? Is it just me? Am I too picky? When I look at the pants in the photos, they don't look too bad. Perhaps it was just my expectations, thinking they'd be the same as my old pants.

I'm pleased I joined in the challenge!!! It's given me the push I needed to begin sewing for myself. Thanks Rikka, for hosting yet another fabulous challenge. I look forward to the next one...
... Pam