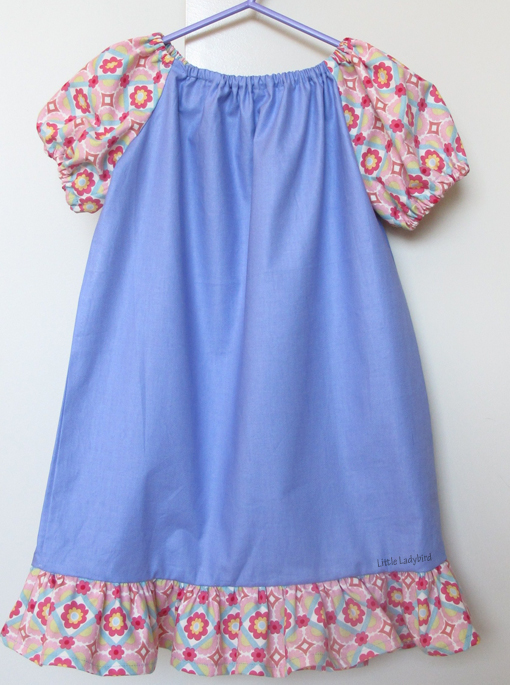 One more dress to show you for the Hopeful Threads sew-along to support Dress A Girl Around the World. This dress isn't mine. It's the first dress my daughter has ever sewn. It was about time I helped her with sewing.

She's been asking me to teach her to sew, since she was a kid and she's now an adult. She used to suggest we could have some quality mother and daughter time together teaching her to sew. In an ideal world, I would have stopped everything and spent the time with her. This was, however, during the period when I was only doing repairs, taking up hems and sewing dancing costumes. Any sewing I did, I wanted done quickly. I was working full time, the kids had extra curricular activities on every day after school and Mr TMW worked long hours. Yeah, I know, excuses, excuses, excuses!!! Anyway, it didn't happen.

This week, however, we did spend some quality mother and daughter time together sewing. There are some advantages to teaching an adult to sew, as opposed to teaching a young person:

Tash's dress is heading off to the Australian representative for Dress A Girl Around the World.
The day after Tash did this dress, she sent me a message to say she had sewn another dress, the same as this one, by herself. Adults learn quickly!!!
Kristy was aiming for 100 dresses in the month's sew-along. Can you believe it? Over 300 dresses were made!!! You can see them all over at the Flickr group. Congrats, Kristy, on organising such a successful sew-along.
I am thrilled that so Threading My Way readers helped with this very worthwhile project:
If I've left anyone off the list, please let me know, so I can add your name.
I know a couple of other girls were going to join in the sew-along, but sometimes we can't do all we plan to. Life gets in the way. I've stopped trying to stick to my To Do lists, so I don't stress so much... LOL!!!
Dress A Girl Around the World will always accept dresses that you make. You can find the details on their website. I had so much fun sewing girlie dresses, I'll sew for Dress A Girl in the future, but not this month. As I said in a previous post, this month is for ME!!!
... Pam
Email ThisBlogThis!Share to TwitterShare to FacebookShare to Pinterest