Stepping out of my comfort zone...

I like to continually learn. If I'm not learning, I'm not happy. The steeper the learning curve, the greater the sense of achievement.

At the same time, I like to stay within my comfort zone. I like to perfect what I already know. It's a bit of a contradiction, I know.

On those occasions when I have stepped out of my comfort zone, I've been very pleased with myself and have not only felt that wonderful sense of achievement, but I've learnt a lot as well. 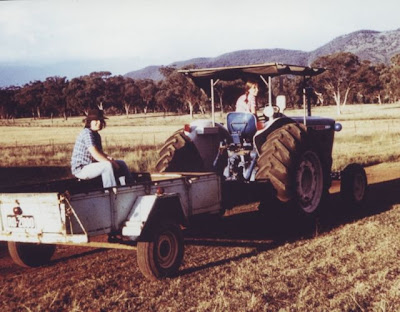 Here I am in my early twenties: a city girl learning to drive a tractor and the first female to do so on that farm. Just being on a farm was something new to me. Mr TMW must have trusted me, as he's sitting in the trailer.

Getting my motor bike licence was another great achievement for me in my early twenties. Now in retirement, I'm going to relearn to ride, something I haven't done for many years. 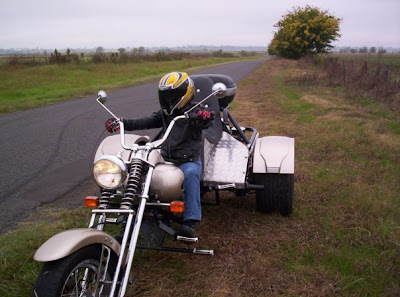 Here's a pic of me riding a trike. Yes, I know it's on the side of the road, but I had to stop to have a photo taken. It looks big doesn't it. It was! Mr TMW and I hired this trike for a weekend. We had a ball! Doing an unexpected hill start for the first time, in traffic, with Mr TMW seated on the back, certainly caused a bit of an adrenalin rush... for both of us. But, oh, I was so proud of myself and so was Mr TMW.

So maybe sewing doesn't give that same adrenalin rush, but the feeling of pride is there, none the less, when I achieve something I was initially unsure about.

In recent times, I made a little baby doll t-shirt dress into a bag, without using a pattern. Here's how I did it. When I began, I had no idea what the finished bag would be like. I really made it up as I went along. That's not how I was taught to sew. For me, it was like breaking the rules. The hardest part was thinking about it and actually making the first cut. Once that was done, I was away. That little bag is one of my favourite projects and I'm keen to do another.

The Retro Pillow Challenge was a challenge for me in more than one way. Not only did I have no idea what I was going to sew, it was going to be public. There were many firsts for me with that challenge. I learnt so much and had lots of fun, so of course I'm pleased I made myself write the email to join.

Last week I told you I had been asked to change a wedding dress into a smart day dress to be worn to a wedding. I'm well under way with the transformation. Again, the thinking about it has been the hardest part. Funnily enough, I haven't found it stressful. Mind you, at one stage I sewed the zipper to both the back and the front of the dress. I think I may have said something I shouldn't have, at that point in time. But, hey, that's why we all own an unpicker.

So, to sum up my Thursday Think Tank, stepping out of my comfort zone is good. I'm finding that the more I do it, the less stressed I am before hand. Yes, I do know it's Friday Saturday, but I still wanted to join in with Thursday Think Tank over at Making Rebecca Lynne.

Are you a risk taker? Can you easily do new things?
Email ThisBlogThis!Share to TwitterShare to FacebookShare to Pinterest