In my last post, I showed you these things pictured to the left, but didn't tell you what they are.

Yes, I know, they do look a little unusual and they are definitely NOT examples of fine sewing, but they will be well used and we had lots of fun making them.


Maybe the following picture will help you..... 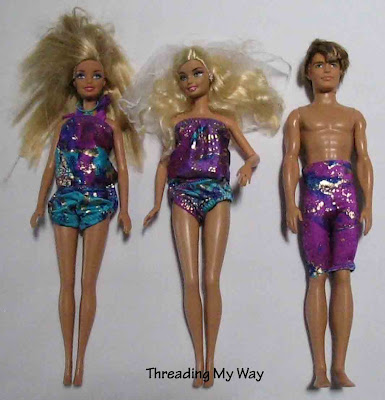 Ken and his two friends, Barbie and Barbie, like to go swimming. The problem was, they didn't own a swimming costume. Out came an old aerobics costume from the 1990s. Yes, I know, I should have taken a photo, but I didn't, so you'll just have to use your imagination.

First up, I looked at the outfits Ken and his two friends already had. Eeeek!!! Have you ever seen such fiddly little clothes, all neatly sewn with velcro fastenings? Onto idea number two. I downloaded a couple of free Ken and Barbie patterns from the Internet. The instructions were as detailed as those for a child's dress.

No, I just held bits of the aerobics costume around the dolls and hacked into the fabric. I then used a combination of hand and machine sewing to create rather brightly coloured costumes that can be pulled on and off without fastenings. 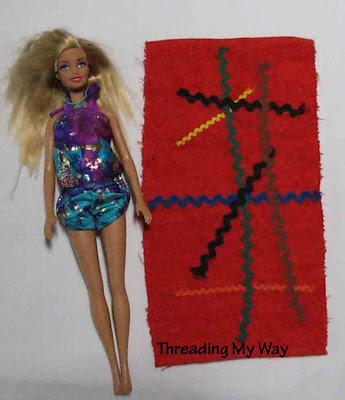 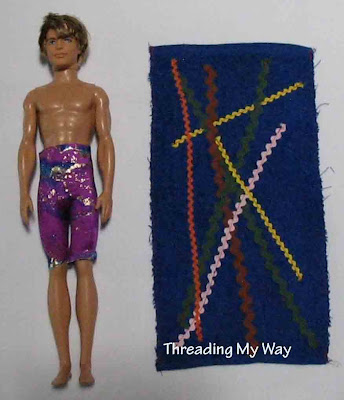 I'm sure you've worked it out by now. Here are Ken and one of his friends lying on their new beach towels. 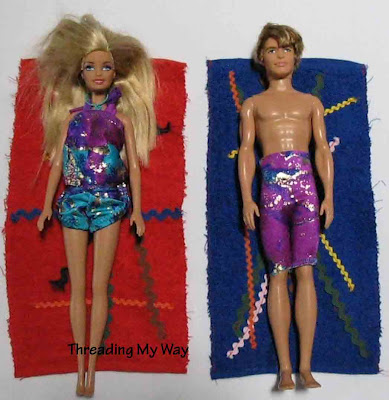 Little Miss is at that stage where she is quite confident cutting pieces of paper, but she's not yet up to sewing. How to involve her in this project? She chose the ric rac and positioned each piece onto the towelling. She then had the very important job of cutting the ric rac to just the right length. The narrow ric rac she could manage if I held it taut. For the wider ric rac, I made the first little cut, then she could finish it. After the ric rac was sewn on, she also cut the threads as close as she could to the fabric.

I tend to be a perfectionist and no matter what the project or its purpose, I still like to do it properly. Making Ken and the two Barbies' swimming gear, has shown me that not all projects need to be done to perfection. These little outfits will be loved and used just as much as if I had spent hours sewing them with perfect little seams and fastenings. Improvisation can be good.

During October, The Artsy Girl Connection is highlighting Upcycled projects. I've entered Ken and Barbies' swimming gear. Head on over and have a look at lots of awesome upcycling projects. You can even vote for your favourite.

Jill, over at Creating My Way to Success, has an ongoing Clothes Recycling Linkup, with over 158 fabulous ideas to turn old clothes into something new and useful.
Email ThisBlogThis!Share to TwitterShare to FacebookShare to Pinterest