Back After a Break... Almost

There hasn't been much sewing going on here in the last few weeks, and no blogging for over two weeks. It's not often I go for that length of time without at least one or the other on most days. 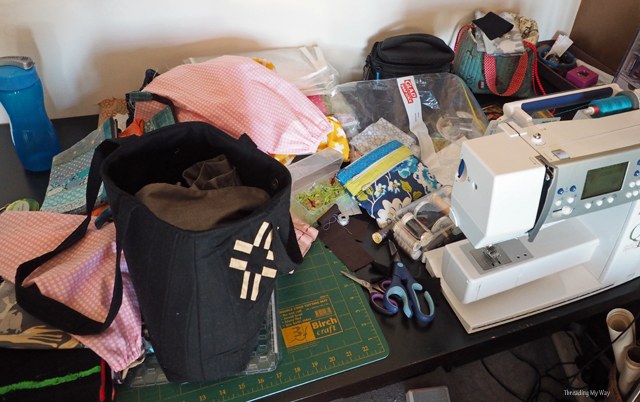 Things are piling up on my sewing table!!! There are a few pairs of baby harem pants almost finished - just the waistbands to go on three, and I'll be able to send off five pairs, together with matching bibs, to charity. I've missed the deadline, but I'm hoping they'll still be able to be used.

The bag contains my daughter's lined blazer ready for alterations - the sleeves need shortening. I hate to admit it, but I think it's been in the mending pile for well over two years. And there's another one somewhere in my sewing room that she gave me fairly recently. At least I've made a start on one by unpicking the hems.

There's a couple of quilt tops at the bottom of the pile - the screen printed silhouette quilt that's been in the making for several years now, and a flannelette charity quilt that I started on a whim one night.

You mightn't be able to pick them, but I can see the bits and pieces left over of the last finished sewing project - patching and darning a large rip in the knee of Little Mister's jeans. I thought it was going to be a quick fix, like the hole in the elbow of a jacket I mended. Unfortunately the leg was too narrow to sew on the machine, so I did it by hand.

I should have taken photos, as I experimented with a different technique and I like how it ended up - next time, and I'm sure there will be a next time. Little Mister was rather skeptical when I offered to fix them, but his comment on seeing them finished... They actually look quite good. Success!!!

The photo has been taken as is - no doctoring, staging or hiding things. Ha, ha... this tells you a little about me and some of the items I regularly use...

When my sewing table is messy like this, I'm not inclined to sew, as I'd need to clear a few things just to start. And so I don't start.

Truth be told, there wasn't much sewing going on even before the sewing table became messy. Sometimes the motivation's not there, and I just need a break from sewing and/or blogging. For that matter, the same applies to any hobby I'm passionate about. Every now and then I need to step away.

For the first few days, I always feel self imposed pressure to get back to the sewing and blogging, but if I can get past that, the break starts to feel good.

No guesses as to what I have been doing. If you've been reading Threading My Way for a while, you'll know that I spend an inordinate amount of time outside in my garden. 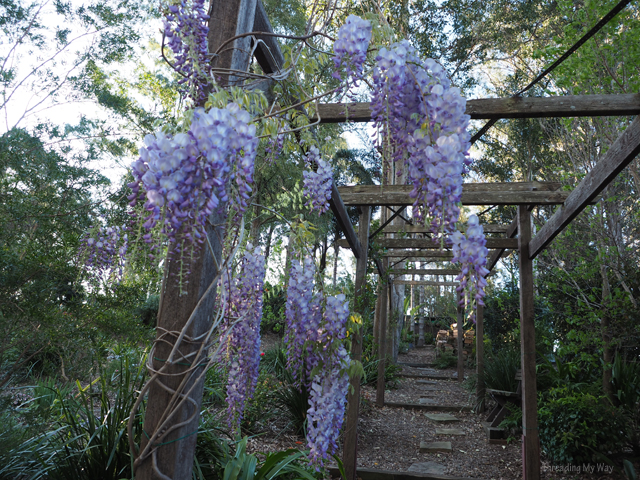 The lack of sewing and blogging has freed up even more time for my number one hobby. I'm trying to get as much done as possible before the heat of Summer.

Later in the week I'll show you some more photos.

Do you need to have breaks from hobbies every now and then, or can you keep going indefinitely?