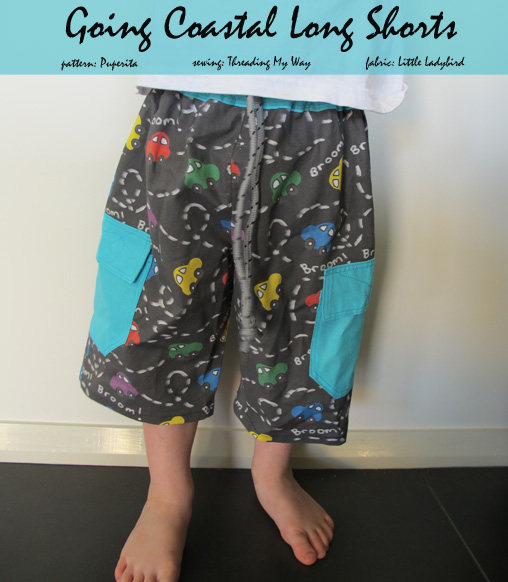 Now I know that for many of you, it's definitely not shorts wearing weather at the moment. Here in Australia, however, the temperatures are climbing and we're headed into Summer. It's been unseasonably hot during Spring and the kids have been wearing shorts for some time now.

When I last posted about boys' shorts, I mentioned that it was time I used a new pattern and so I've made these shorts with the Going Coastal Long Shorts pattern, by Puperita. 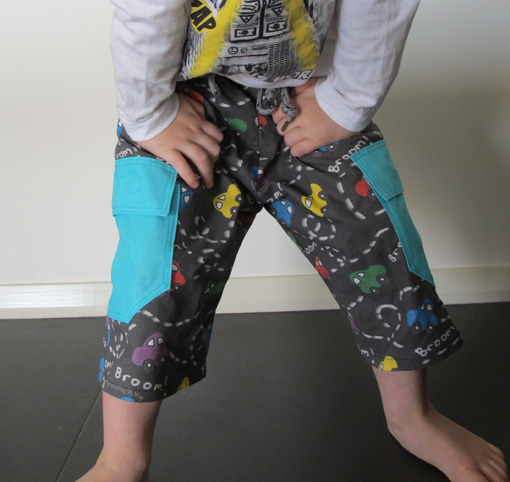 I first heard about Puperita patterns over at While She Was Sleeping, when Jenya was running a giveaway. I didn't win the giveaway, but the patterns were discounted at the time, so I bought a couple. Jenya has since written several reviews and speaks very highly of Puperita patterns, so I thought it was time to give them a go and I'm pleased I did. 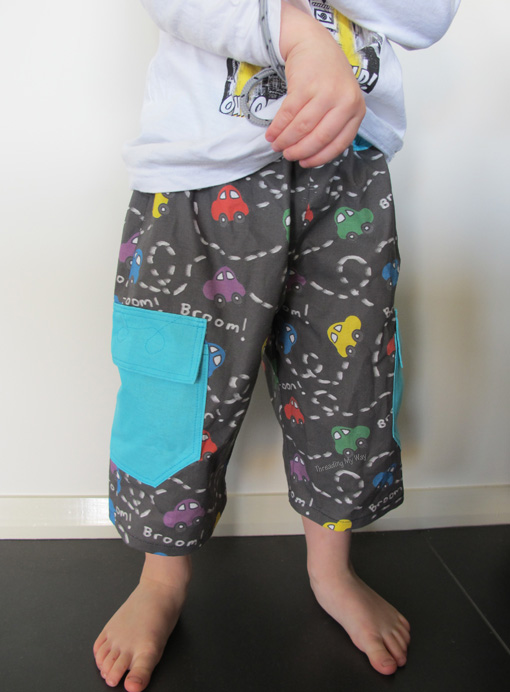 The Going Coastal Long Shorts are designed to come below the knee and are a loose fitting style. They're a bit big for Little Mister at the moment, but he'll soon grow into them. I attached the pockets a little higher than the pattern recommends, but this means I'll be able to make a larger hem, so they could almost be worn now. Little Mister is used to tighter fitting shorts and is quite particular about his clothes, so we'll see what he says. Either way, I'm not worried, as I know he'll get lots of use out of them.

The pattern has charts for both boys' body measurements and garment measurements. As Little Mister is not overly tall for his age, I should have checked the charts first and then the shorts would have been spot on.

I rather like the positioning of the pockets, so they can be seen both front and back. The pockets close with velcro, as I thought this would be the easiest option, but there are also instructions for buttons. 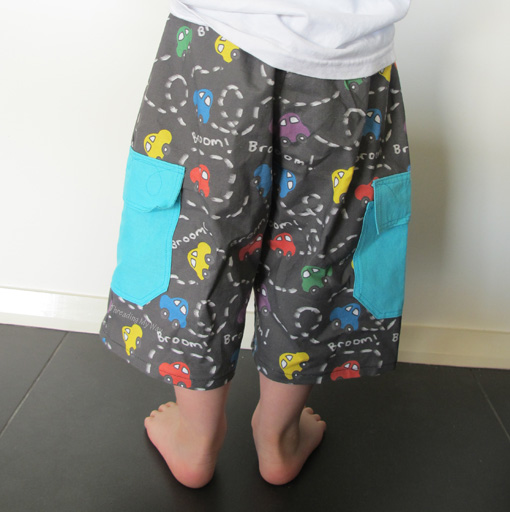 Look how I've matched the pattern across the back of the shorts... a complete fluke!!! 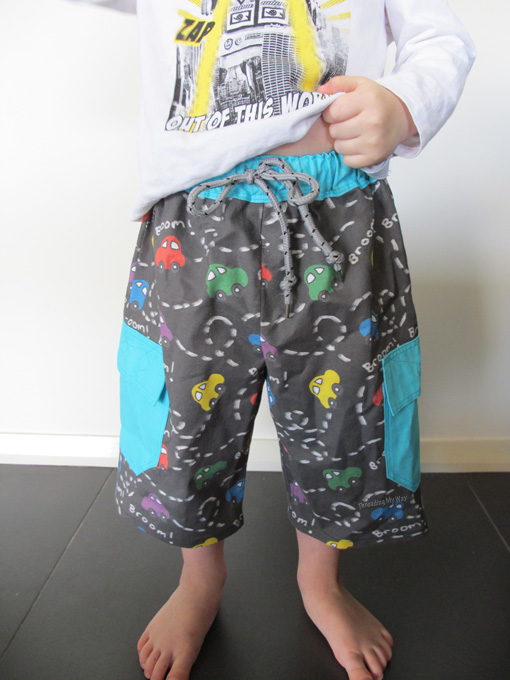 I love the contrasting waistband with the drawstring tie!!! The drawstring is something I found in my stash and it's the perfect colour. I can't remember what it's from... maybe an old pair of pants, or even a shoelace, as it has the little plastic ends attached, so no fraying. I still knotted it because I like the look. As I always do, I've stitched across the waistband at the back, to prevent the elastic from twisting. This has the added bonus of securing the drawstring. Obviously I couldn't secure it at the sides as well, or the drawstring wouldn't function properly.

I should have taken close up photos, but where ever the pattern called for topstitching, I did a second row 1/8" from the first, just because I like the look. Do twin needles come with 1/8" spacing? I have no idea and the ones I have don't, so I just eyeballed it and sewed two rows.

The PDF pattern is easy to piece together and thanks to the very detailed instructions, is effortless to follow. If you've been sewing for a while, you may find you can skim through some sections, but if you are new to sewing, there is no assumed knowledge... every step you need is included. The pictures in the instructions are a mix of diagrams and photos, making each step very easy to follow.

This really is a fabulous pattern! (No, I'm not being paid or sponsored). In total, I've purchased six Puperita patterns and I'm keen to try the others. I'll definitely be making more Going Coastal Long Shorts. 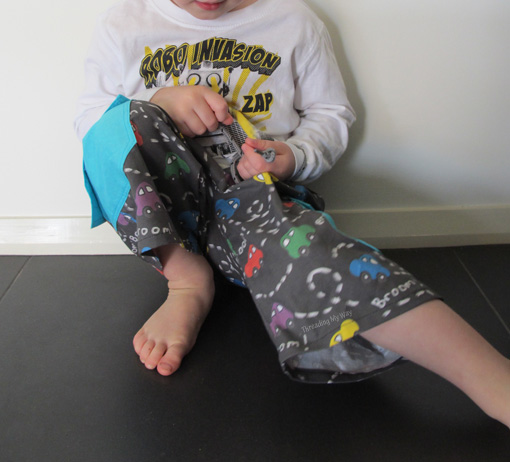 You probably recognise the fabric from Fabric Baskets for the Boys. This is a larger version of that fabric. The fabric baskets were made with Broom Broom Small and these shorts with Broom Broom, both designed by my daughter, Tash. Good boy fabrics are not as easy to find as girl fabric, so I was thrilled when Tash came up with this design. Perfect for a pair of shorts!!! When making my selection from Spoonflower, I chose to have the design printed on Kona Cotton Ultra and am very happy with it. Apparently the Kona cotton is temporarily out of stock. I found out when I went to order some more.

It would have been good to photograph Little Mister wearing his new shorts and carrying one of the fabric baskets. He doesn't, however, have the baskets yet. He'll get those on Christmas Day.