Where it all began...

I've mentioned before, I learnt to sew at school, many moons ago. When we entered 3rd Class, at about age 8, the girls would do sewing once a week, while the boys did cane weaving.

I have no idea what we did first, but it was all hand sewing until we reached 6th Class. I do remember we had to keep a sampler book each year and I suspect the majority of our sewing was learning new skills by making a sample, which we then glued into the book. Oh, how I wish I had kept those sampler books!!! They contained examples of stitches, embroidery and different sewing techniques.


I did, however, keep a few things I made. Last year, during a clean up, I found this huckaback embroidery. I'm not sure what it was meant to be, but I suspect it sat unused in a cupboard for years until I wrapped it around a glass plate, to protect it. 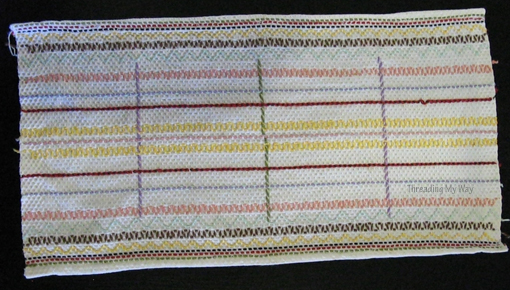 Last year, sewing bloomers for a sew-along with Hopeful Threads, brought back memories of drafting bloomers at school. Hmmm... no fond memories there. That was my first and last experience drafting a pattern.

At some point, we made our own needle cases, again all by hand. My Mum and I swapped needle cases a long time ago. I have Mum's, with her initials embroidered on the front and Mum has mine. Here's my needle case which is a little the worse for wear. 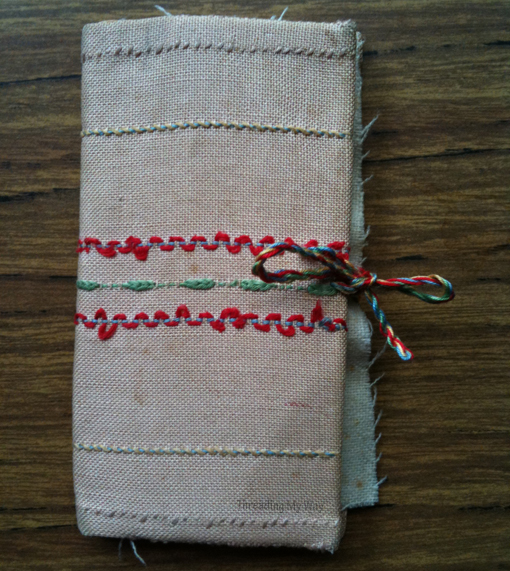 Now that needle case was used a lot during my years at Primary School, although perhaps not always exactly how it was intended. Our sewing teacher most definitely had her favourite pupils and I was not one of them. She liked the girls who did perfect sewing.

Somehow or another, my needle case often used to defy gravity and fly out the window, ending up on the ground outside. There were no repercussions; we were allowed to go outside and retrieve our needle cases, although we were careful to only do it one at a time. 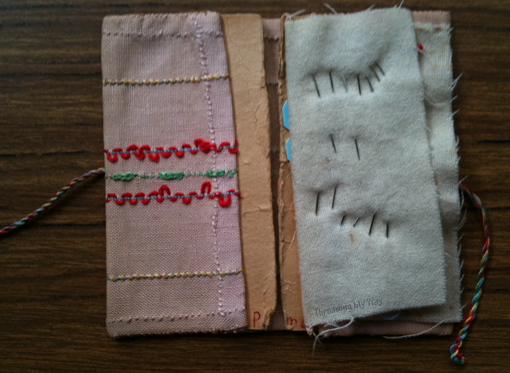 When I was cleaning out a cupboard, about a month ago, I found my old knitting bag. I was quite excited, as I thought I had thrown it out when I gave away everything in my sewing stash. 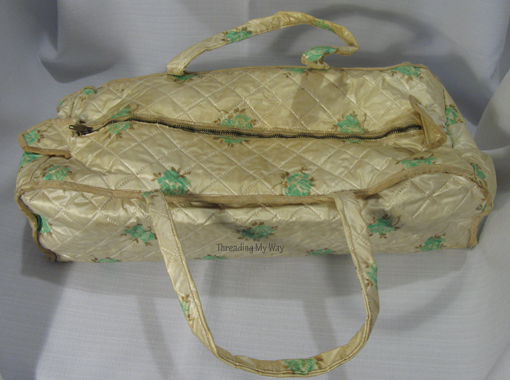 It has to be at least 35 years old and definitely looks like it. That binding was once white!!! I made my knitting bag at home, not at school, I'm guessing when I was in my early teens. Inside, were some pieces of fabric I used to wrap my knitting in and these I did at school... 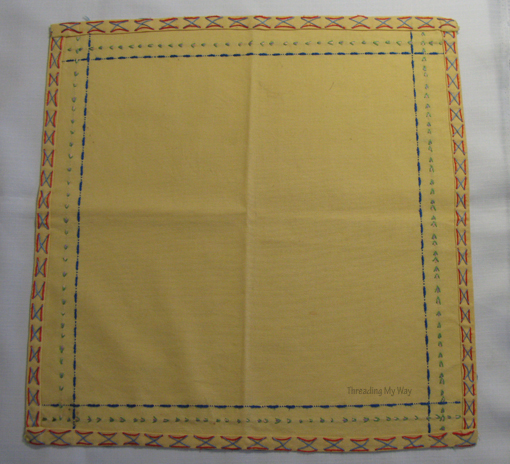 This table mat was made while I was in my pre-teen years and is all sewn by hand. I really would like to relearn how to stitch like this again!!! There'll be heaps of tutorials if I Google it.

When we were in 5th Class (about 10 years of age), we progressed to making an item of clothing; a hand sewn skirt. From memory, it was a rectangle of fabric that was 1yard (91.44cm) x the required length...
I wish I had a photo of that skirt of which I can remember being very proud!!! It wasn't hard, but it took a while.

At about that age we also made dolls' clothes for a charity. Again I can remember being very proud of my handmade creations. I felt quite squashed when the teacher hardly gave them a glance. Her favourites were given all the attention.

The next year, in 6th Class, we were into the big time and were allowed to use the black treadle sewing machines. I think there were two or three for all of us. We made muumuus. Mine was green and I loved my creation!!! At the end of the year, we had to show off our dresses at a fashion parade. I was twelve years of age, shy and a little nervous about parading in front of the whole school, but I can remember being a little excited and very proud of my dress. To this day, I can quote my sewing teacher's introduction as I walked onto the stage.... Pamela doesn't need darts in her muumuu. All those 12 year old boys were watching and listening. I was mortified!!! I didn't care if I needed darts or not. I desperately wanted them. I'm sure I wasn't the only one who didn't have darts in her dress, but it felt like it.

Off to High School after that. Sewing was compulsory again for the first two years. After that I chose it as an interest subject for the next two years and for my final two years, I chose languages (French and Latin, which I wasn't particularly good at) instead. The teachers must have been OK in High School, as I don't have any bad memories. We did a little embroidery and lots of sewing our own clothes on electric sewing machines!!! 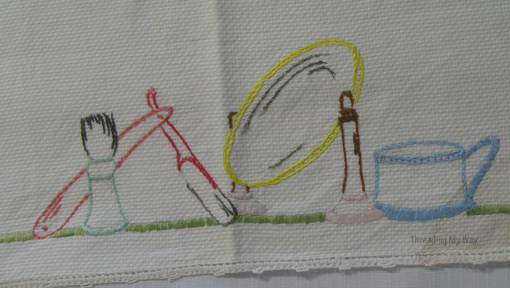 I found this shaving towel in my knitting bag, too. I gave it to my Dad and you can see by the stain that he actually used it. 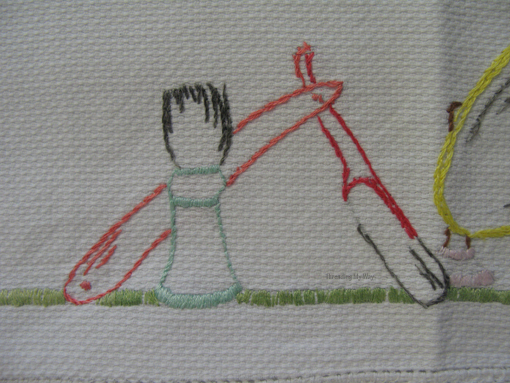 There were no fashion parades at High School, unless you seriously did sewing as an elective, so I was safe. We made all sorts of clothes, finishing up with a two piece woolen slack suit, with a fully lined jacket. Hmmm... my Mum still remembers helping me with that suit. Sadly, there are no photos of any of my High School sewing, other than the shaving towel.

At the same time as I was sewing clothes at High School, I also began sewing for myself at home, using my Mum's sewing machine. I was off and away on my sewing journey...
... Pam

Edited to add - Two years after this post was written, I found my old sampler book. Yay!!!
Email ThisBlogThis!Share to TwitterShare to FacebookShare to Pinterest