Family Priorities ~ or Who Gets Quilts Made for them FIRST

My first ever quilt, a zig zag quilt, was made for our youngest son in 2012. I was quite justifiably proud of that quilt, mistakes and all. It was a huge learning curve, but perhaps one of the most important things I learned was that no one else sees the mistakes. 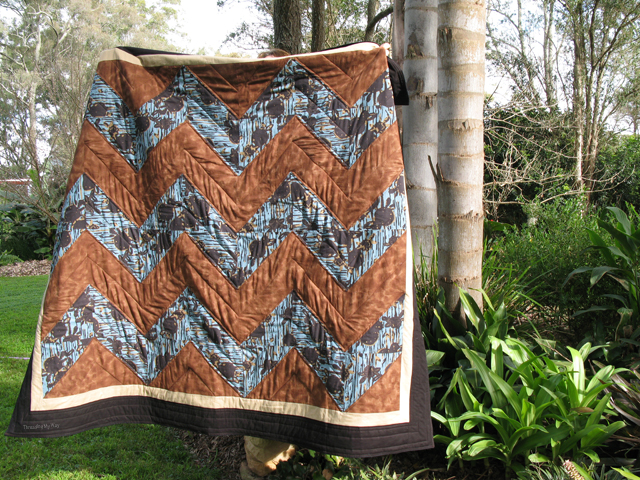 ... and I know my son loves it. To see him wrapped in that quilt whenever we would Skype in Winter simply warmed my heart.

Once I made my first quilt, I knew I wanted to make them for other members of the family. Ahhh... but how to decide who to sew for next.

Our eldest son started giving out not so subtle hints about when he'd get a quilt. We talked about colours and designs. I couldn't get a handle on specifics, so decided we'd need to work together on this one. We'd already made a prototype for a leather iPhone case and collaborated on the design of a travel shoe bag.

However, at the time he lived interstate, and so nothing happened for a long time. One day he mentioned that one of his mate's Mums had made said mate FOUR quilts... and where's my first quilt, he asked. Just make one Mum. If I don't like it, I'll pack it away and bring it out when you come to visit... said with a smirk on his face.

... and so without any input from my son, I made him a scrappy blocks quilt for Christmas, 2013. 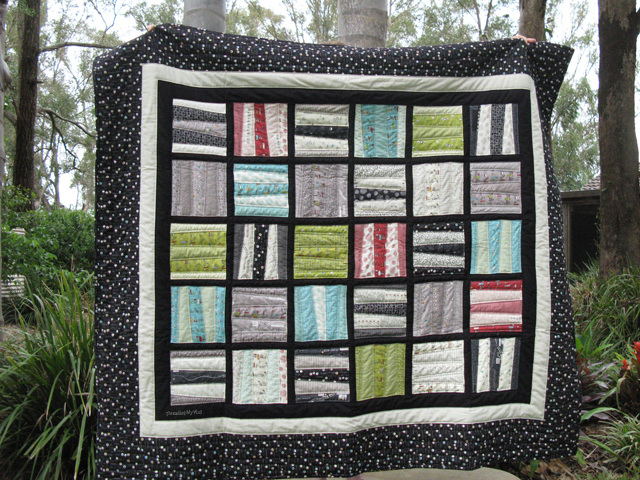 ... and I know he loves it. None of my children can disguise their feelings upon opening presents.

My third and fourth quilts were for the next generation in the family. Being too little to have much say, there was definitely less pressure and so the Peter Rabbit quilt was made for the youngest, in 2014. 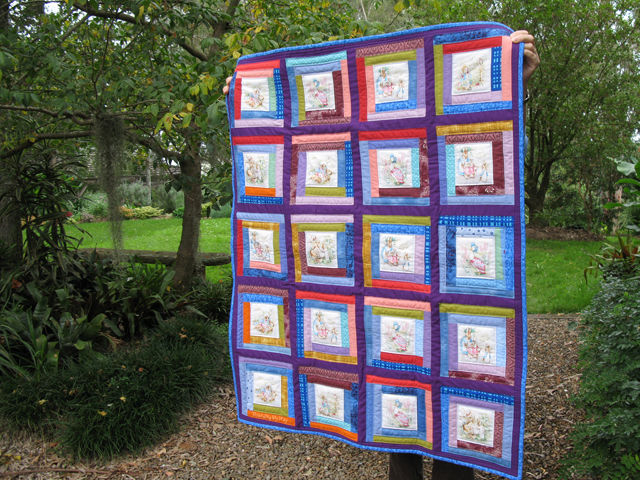 His elder sister quite naturally wanted a quilt as her brother had one, so a month later I finished her fairy panel quilt - a whole cloth quilt.

I love seeing the quilts on their beds every time I visit and I know they snuggle under them on the lounge when they're not well. 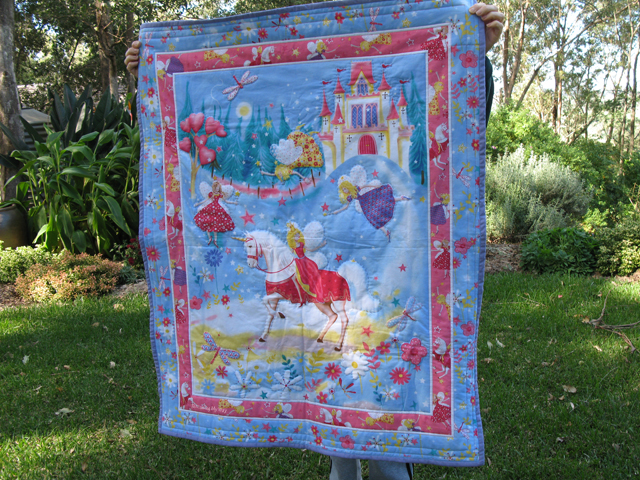 I hadn't really planned, or even thought about making a quilt for any of the extended family. Certainly not till I'd made one for everyone in the immediate family, but when my sister in law was hospitalised in mid 2014, I thought a quilt would be more comfort than a bunch of flowers. And so I made and sent her the Barcelona Strip and Flip quilt. 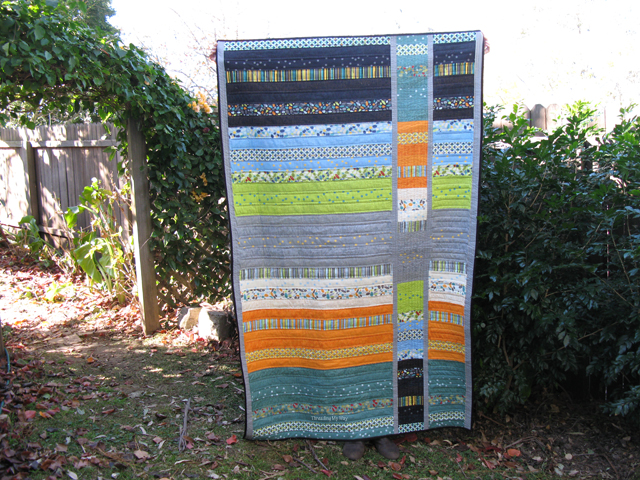 It's two years this month since the Barcelona Strip and Flip quilt was finished. My daughter has mentioned several times how EVERYONE else in the family has a quilt, but not her and so she presented me with 64 screen printed silhouettes... Just design it how you want, Mum. You can't go wrong. I didn't have quite the same amount of confidence in my abilities as my daughter obviously did. Consequently, progress has perhaps been slower than my daughter was envisaging. 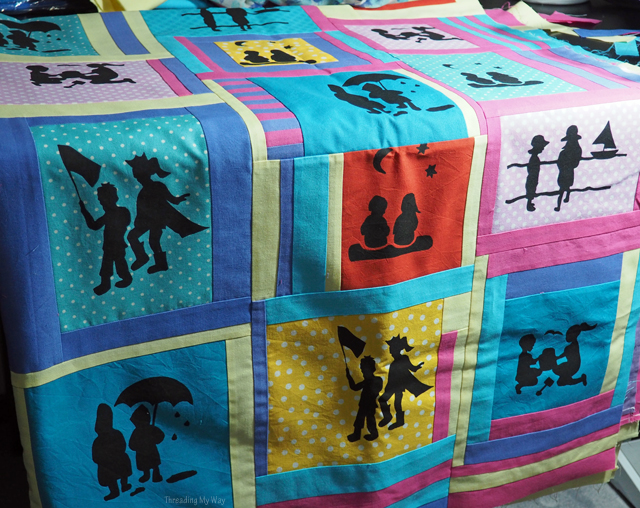 The quilt top is finished (the binding wasn't done in this photo) - just the backing to piece and then I can begin to quilt it.

In the meantime, my sister saw some bookshelf quilts I'd Pinned, specifically to make a quilt for her. Little Sis' theory was that seniority takes preference and so her quilt should be next.


Ha, ha... Sorry, Little Sis. My daughter's quilt has to be finished first, not to mention the Robot Quilt that I started for Little Mister in 2015. That one's been a long time in the making - longer than my daughter's screen printed quilt, but finally, I finished the robot quilt last week. Just a teaser photo today. I'll do a full post soon. 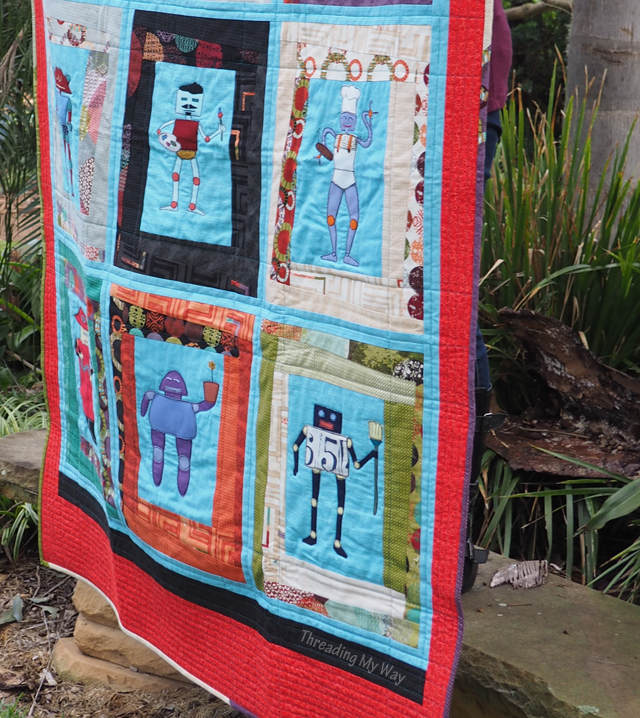 Now that I've made a quilt for Little Mister, of course Little Miss will need one, too - and fairly quickly.

And while I was supposed to be making the screen printed quilt, I had a brainwave last month that I should make a shirt quilt for Mum. Talk about seniority, Little Sis. Mum wins hands down there!!! 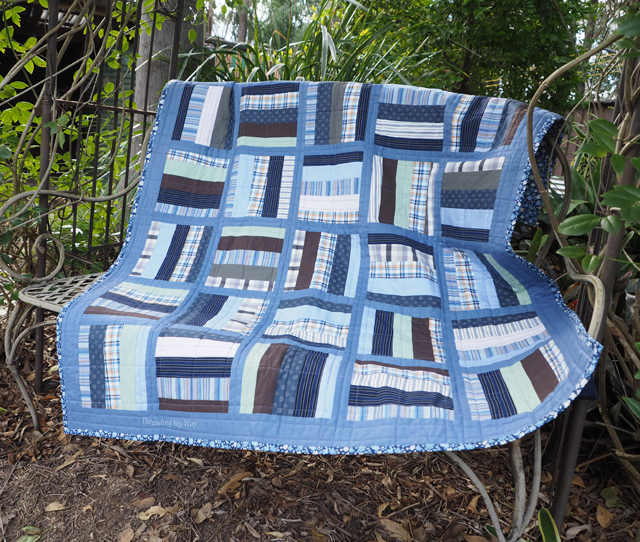 So, which family member gets their quilt next? Will it be my daughter, or maybe Little Miss? My daughter's is almost finished, whereas I have no idea yet as to the design of Little Miss'. Stay tuned...