What's the best age to teach kids to sew? What age can you start to let your little one use a sewing machine? I'm not sure that there's any hard and fast rules, but Little Miss used my sewing machine the other day, so I thought I'd show you how we went about it. 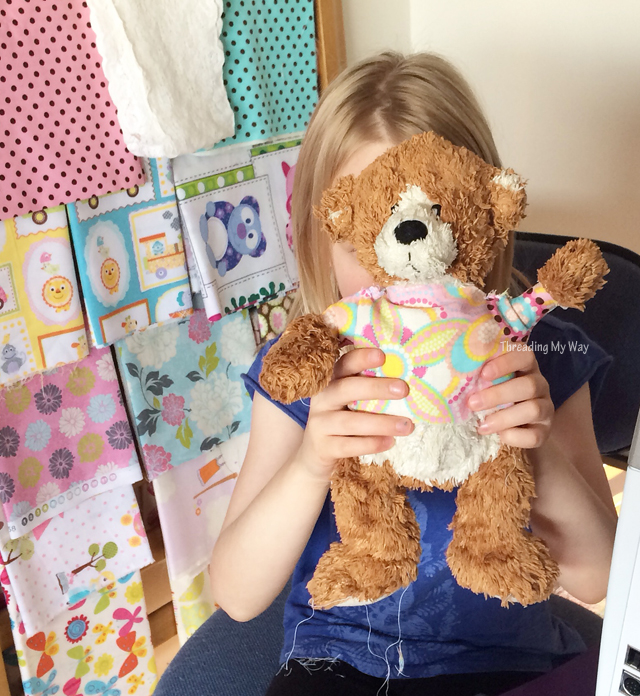 Little Ladybird and I had planned a sewing day for our new venture, Evie & Flynn. Little Miss, of course, wanted to be involved, so before we started our sewing, I spent some time sewing with Little Miss.

She had already decided that she wanted to sew a top for her favourite bear, Cassidy. Little Miss was adamant the top would NOT be made with stretch fabric. So, woven fabric it was. 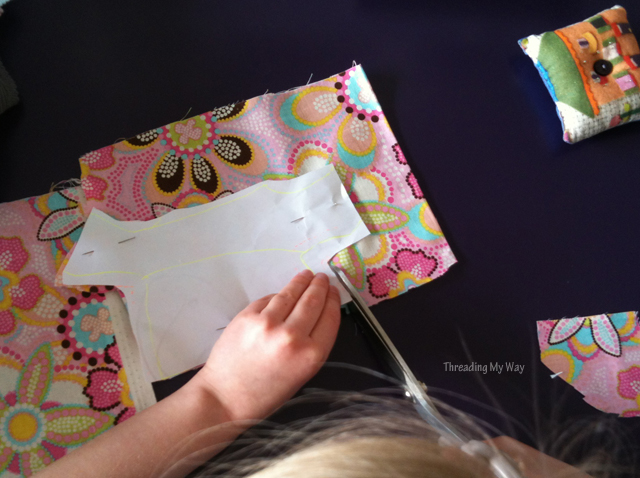 I'd love to show you step by step photos, but Little Miss moves at rather a fast pace when she sets her mind to something, and I didn't want to interrupt the process.

After a quick discussion as to how we might go about it, we decided to trace around Cassidy's top half. I explained about seam allowances and added the extra. The first pattern piece was very quickly made. Holding the pattern piece up against Cassidy, I explained that it wouldn't be wide enough to go around her and so we guessed as to how much to add and made a second patten piece.

As you can see, the top is not symmetrical. It's a fine line deciding how much information to impart - when to suggest something and when to hold back. Giving too much information can stop the flow of creativity. Not giving enough information can result in the project not working, which in itself need not be a bad thing, but in this case, success was important. We needed Little Miss to be happy so we could get on with our planned day's sewing. 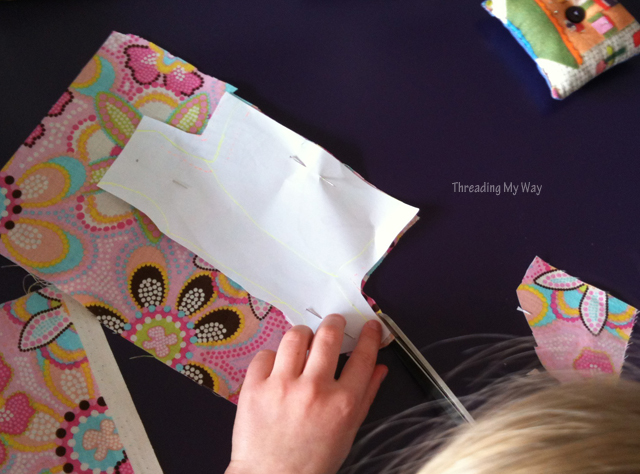 Little Miss found it quite hard to pin the paper to the fabric. She managed most herself. Next time I'll provide a thinner material for the pattern - tracing paper, interfacing or something similar.

She's quite used to cutting with largish scissors and had no problems cutting the fabric. Kids' safety scissors aren't sharp enough to cut fabric, so if your child is not used to sharp scissors, or if you are worried they might cut themselves, cut the fabric yourself. 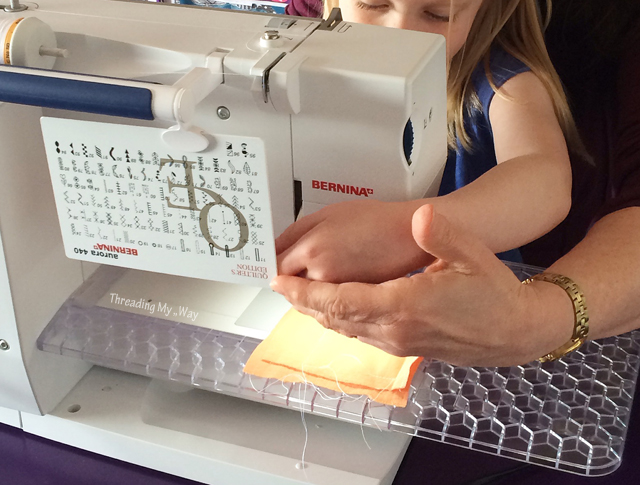 On previous occasions, Little Miss has guided fabric through the machine, but she's never used the foot pedal before. She couldn't work out what I was doing with her little wooden chair. She sat on it, with her chin at table height, and explained why it wasn't tall enough. The chair was the perfect height for the foot pedal, though.

Little Miss sat on my lap for three reasons:


Before we started sewing, we talked about safety and established some rules:
Little Miss is really good with rules and she defined how close was close to the needle.

My machine has a speed regulator and I moved it to the slowest setting - a very handy feature.

All went smoothly and Little Miss was most proud of herself. She learnt to hold the thread to start, how to reverse to lock the stitches and how to guide the fabric keeping the right distance from the edge. Not being able to see the presser foot lever, she needed help to lift and lower it.

Putting the top on Cassidy, however, took some doing, as one sleeve was too narrow. I didn't want to start from scratch, so I managed to force the bear's arm into the sleeve. Just as well it's a softie and has no feelings.

Little Miss decided the neckline was too large. I spared her the lesson on why stretch fabric would have resulted in a better fit... LOL!!! ... but did explain why taking the top off and making a smaller neckline on the machine wouldn't work.

Hand sewing at either side of the neck worked perfectly. Perhaps not perfectly if we're talking correct sewing techniques, but for a little girl who didn't want a gaping neckline, it worked well. She used a normal sharp needle, so again we talked about do's and don'ts... keep the needle away from your eyes, etc. 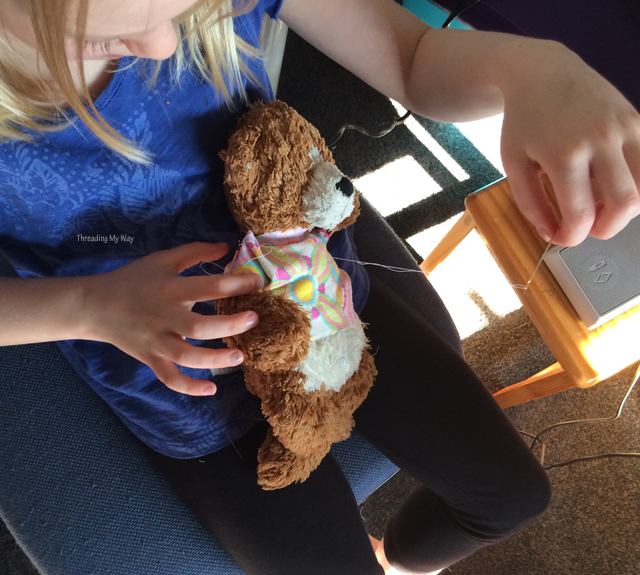 I know I'm going to be asked what do I think is a suitable age for children to start sewing, but I honestly can't answer that question. Only you can determine when you think your child is ready to safely use a sewing machine, scissors and sharp needles. The age will vary greatly and depends on many factors (just a few listed):

We both had lots of fun and Little Miss was very happy with her sewing. Cassidy, however, is going to have to stay in that top. I think it'll have to be cut off to remove it. Ha, ha... we'll face that one when we come to it.

Little Miss happily spent the rest of the day singing, dancing, colouring in, building cubbies and generally amusing herself, while we were able to tackle the tonne of projects we had planned. We brought her table into the same room as us, and she joined in our conversations, quite happy that she was a part of our day.

If you have sewn with your children, how did you find the experience?