Last year, I showed you how to make a drawstring bag the right size to hold a French knitting kit. Lots of people left comments, talking about doing French knitting as a child. Many could remember the process, but not the name French knitting. 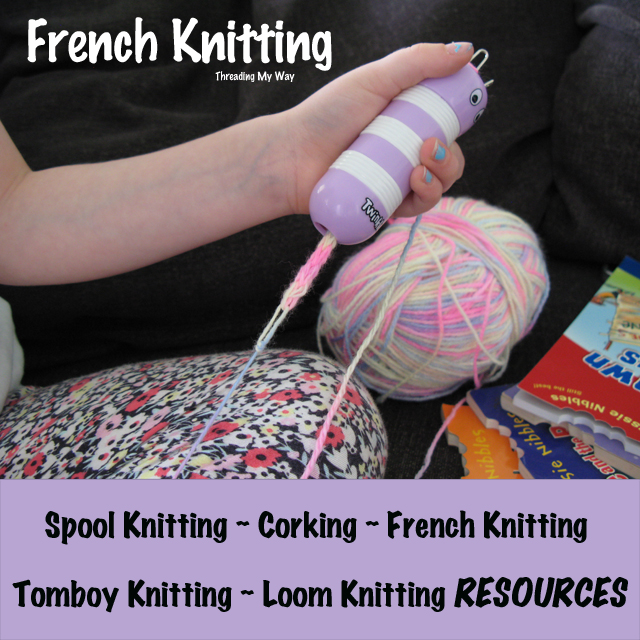 Many thanks to Catherine for mentioning that it was also known by the names of Corking and Spool Knitting. Wikipedia also refers to it as Tomboy Knitting. This craft from years gone by is making a comeback and in recent times, I've seen a very similar activity called Loom Knitting. 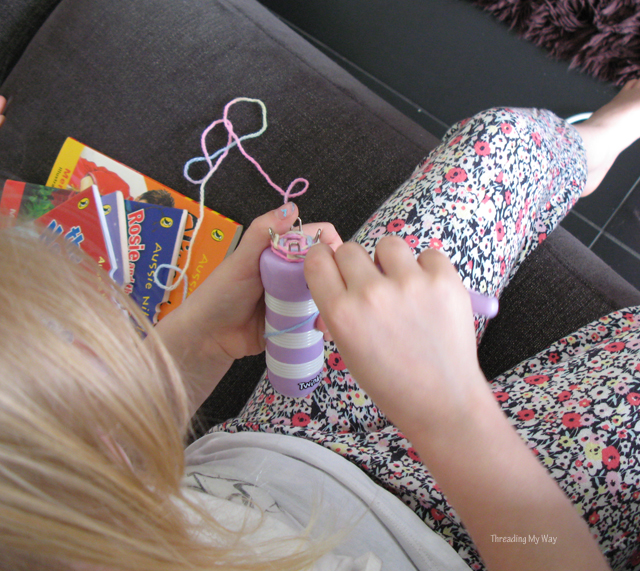 For brevity, I'll mainly use the term French knitting, for the rest of this post. When I grew up, most kids learnt to French knit. Many started by using a wooden cotton reel with nails hammered in. It wasn't fancy, but it worked.

I was lucky enough to be given a Knitting Nancy. Functionally it was the same as the cotton reel.  To me, however, there was a world of difference. My shiny new Knitting Nancy had a painted face and sort of looked like a wooden doll.

Wooden cotton reels are not readily available now-a-days and it's not so easy to find a wooden knitting nancy, so I bought a couple of French Knitting Bees. These ones are made of plastic and have four hooks at the top.

I've also recently bought a set of looms for knitting, but haven't used them yet. Originally I bought them to use with the kids, as I thought they might be able to make a scarf or hat. The more I read, however, it appears they are very popular with adults.

There's no need to spend money, though. You can easily make a spool from a toilet roll and a few paddle pop sticks. Being wider, the toilet roll knitter has the advantage of being able to use thick wool, resulting in a wider tube of knitting. 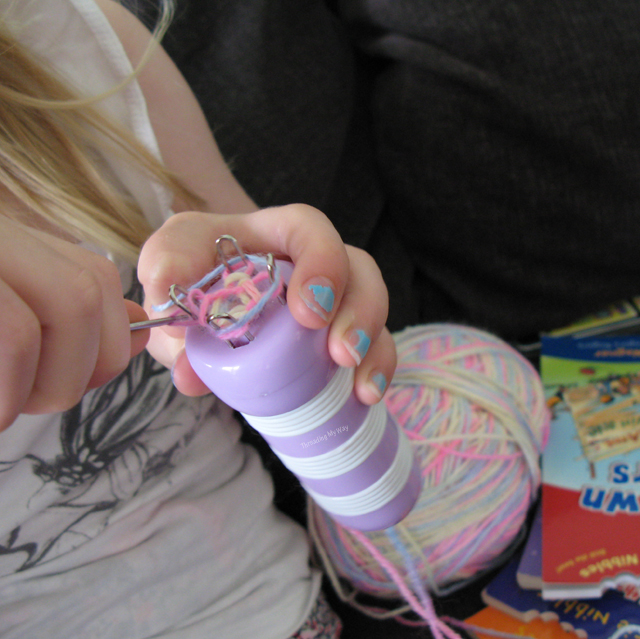 French knitting is a great activity for kids. However, as the warning on the back of the packet says, the French Knitting Bee is not a toy. Adult supervision is necessary. That awl is sharp and could do some damage. I don't remember what we did with our tubes of French knitting, other than compete with each other to see who had the longest. If only we'd had the Internet... 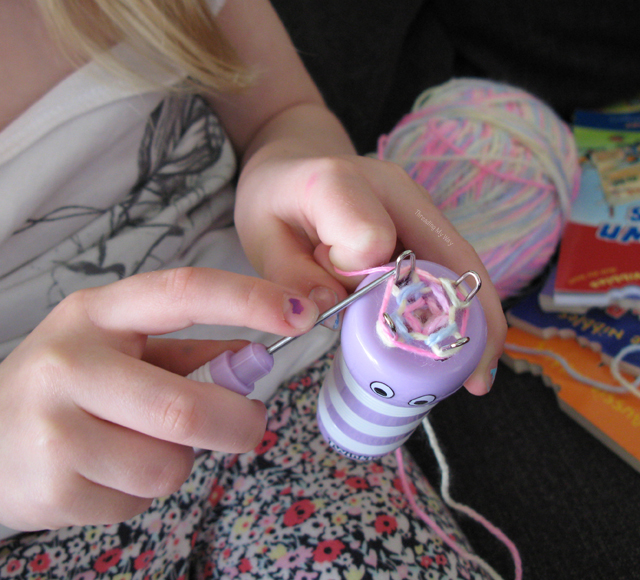 There's even lots of patterns to make functional garments and softies. These appear mainly to be loom knitting...

I am so tempted to try some loom knitting myself, but then I know what will happen. I'll get right into it and then I'll get out the old knitting needles. Next thing you know I'll be knitting... cardigans, jumpers, dresses. Yes, many moons ago I knitted myself a couple of dresses. NO!!!! I don't have time to start knitting, but I will dig out the photos of those dresses to show you. I think for now I'll confine loom knitting to an activity to do with the kids. 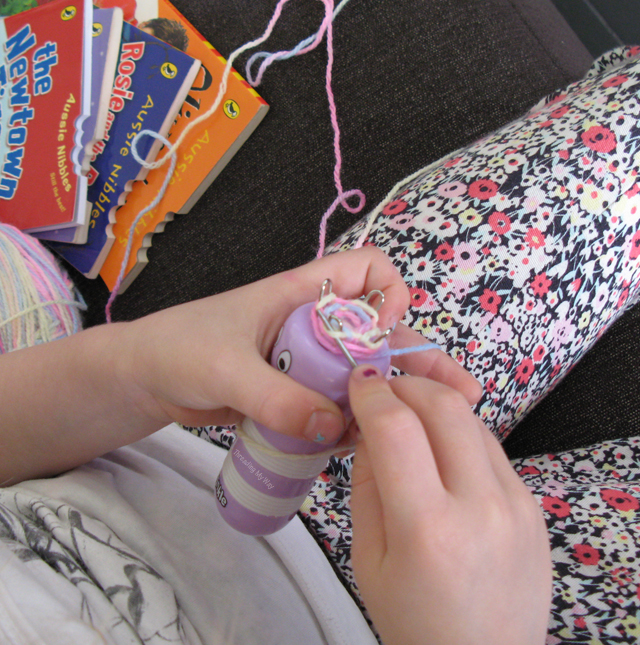 While researching this post, I have come across some informative and fascinating articles and blogs... 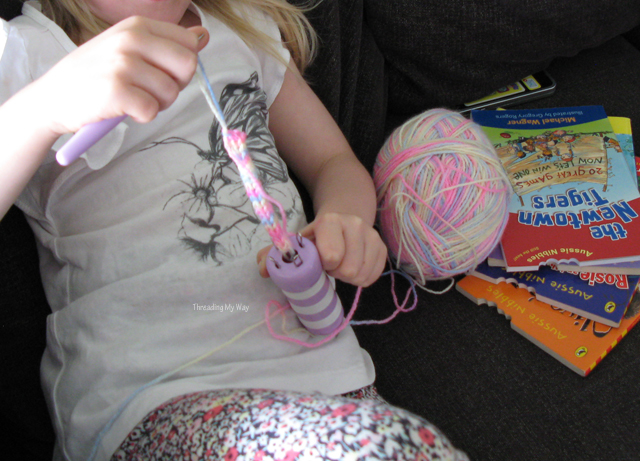 So, how did Little Miss go with her French Knitting? I thought she'd have no problems at all, given that she has mastered the art of making a friendship bracelet and she spends much time creating loom bands. She could understand the concept easily enough, but as she used the awl to take the wool over the hooks, unintended loops would often slip off and this frustrated her as she needed help to get them back on again.

As you can see, she persevered, but one too many loops slipped off and she pulled the whole tube undone. I think she's over her aim of making a rug.

In her French Knitting Bee kit, there is also a pom pom maker and she's far more interested in making pom poms. Maybe she'll pick up the French knitting after some time has elapsed. We'll see. If she does, I might suggest she winds the wool a little looser and see if this makes a difference. 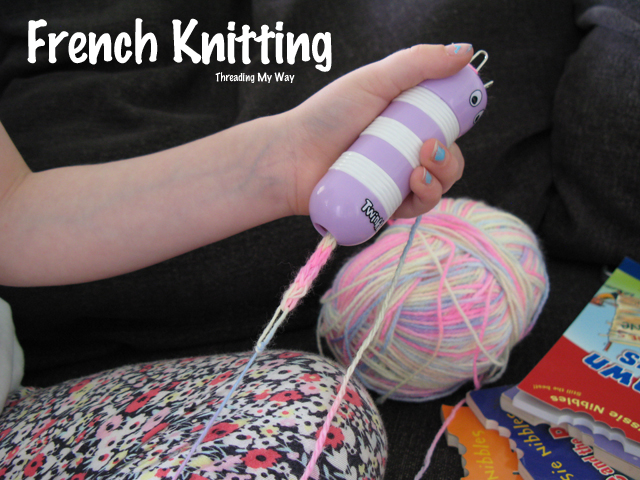