Easy to Make Dress Up Clothes... 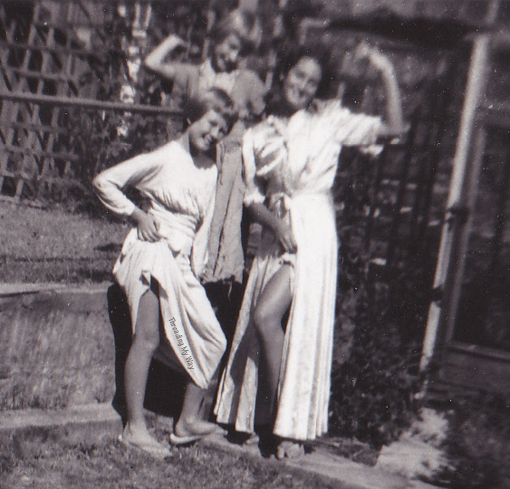 Like most young kids, we played Dress Ups as a way of amusing ourselves when we were growing up. I have few recollections as to where our imaginations led us in our make believe world, but I do know we had lots of fun.

We often dressed up in Mum's old ball gowns. There was a box, or maybe it was a large tin case, of clothes that we were allowed to raid. Perhaps there were other clothes in there too, but I only remember the glamorous ball gowns, made with shiny, shimmery fabric. These were dresses unlike any we had in our own wardrobe.

In the photo above, I'm standing front left, my sister is at the back and a neighbour is on the right. We obviously didn't have matching shoes to dress up in, as we were wearing the standard Aussie shoe attire for all kids of that era... thongs. No, not our underwear!!! If you've been reading Threading My Way for a while, you know that the thongs we wear on our feet are the same as flip flops to the rest of the world. We were more than adequately covered in our Bonds Schoolgirl Cottontails!!!

This ad was printed before I was born, but underwear in this style was standard for decades. So, that's what we were wearing underneath our dress up clothes. 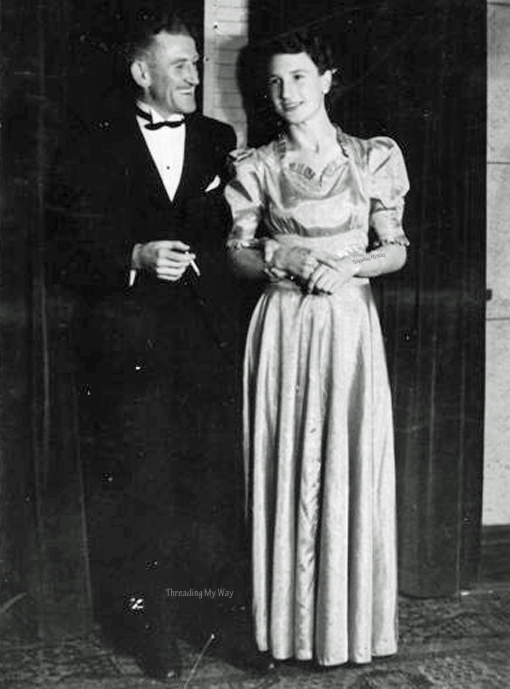 Here's my Mum and Dad, before children, with Mum wearing one of her gorgeous ball gowns. Fancy letting us run around the backyard in beautiful dresses like this!!! I suppose Mum wasn't going to use them again, but never the less, we probably ruined them.

According to my sister, who seems to have a better memory than me, this dress was a lightish sky blue bordering on mauve - a water-wave taffeta. As a teenager, my sister altered this dress and wore it on a 20km walk-a-thon.

I didn't have any ball gowns for our kids to dress up in, so they improvised with less glamorous clothes. We did buy Spiderman and Batman costumes, but in reality, there was no need to buy anything. 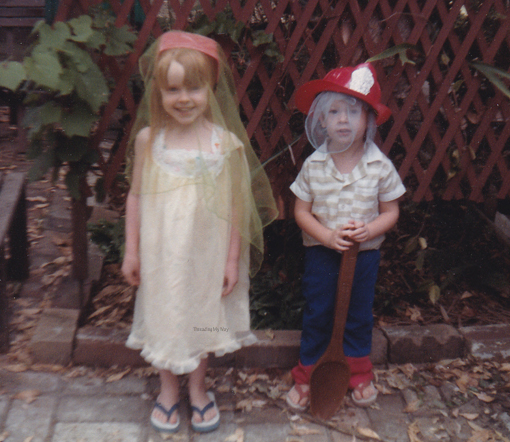 I have no idea what my kids were role playing in this photo, but it's something they often did. Pieces of tulle are very handy to have in the dress up box. Ice cream containers obviously come in handy, too. That big spoon was something we once had hanging on the wall... LOL!!! Much better for the kids to play with. 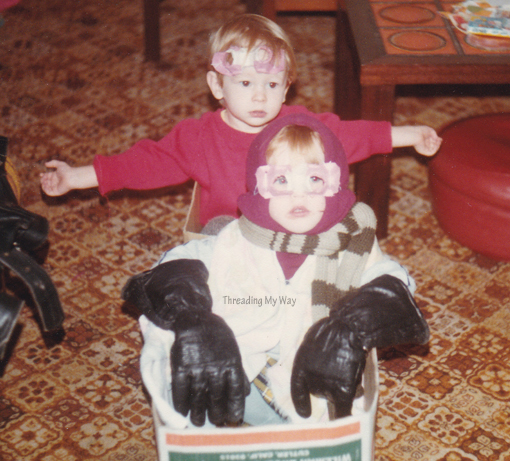 I love this photo!!! The kids may be less than impressed with me showing it to you, though. I came home one day, to find Mr TMW had let the kids raid his motor bike gear... scarf, gloves and the leather jacket on the floor. No, the egg carton goggles weren't his!!! From memory, they were flying an aeroplane.

Very little has been purchased for the current generation, either. We tend to make do with whatever's on hand. Letting the kids role play and use their imaginations is the most important thing and they don't need perfectly made costumes to do this. 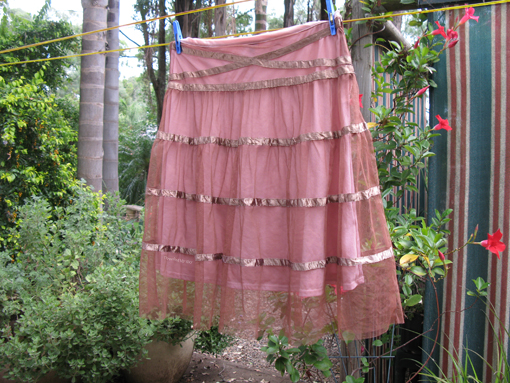 On a recent visit to the Op Shop (Thrift Store), I purchased two skirts for $3 each. After alterations, I thought they'd be perfect for the dress up box. The one above is a large size, originally from Valley Girl and falls to just below my knees. 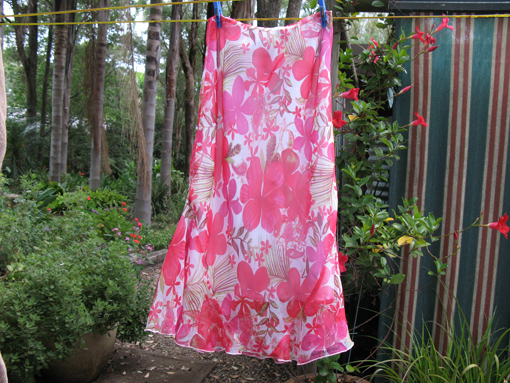 The second skirt is a size 8 (small) made by Callan Designs and would not have been cheap when first bought. This one is just a little longer than the first, but obviously narrower. 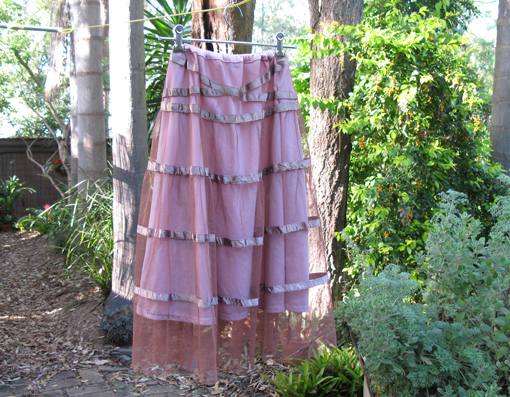 I've taken out the side zip and added elastic to the waist of the tulle skirt, as well adding a couple of tucks. Add a leotard and perhaps Little Miss would like to go as a ballerina, with full length, flowing tutu. Or perhaps a princess would be more to her liking... add a sparkly t-shirt and a tiara. 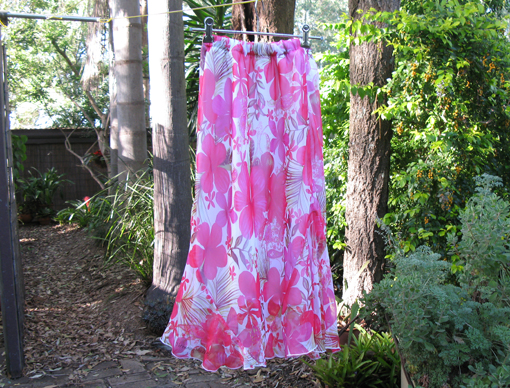 The pink, floral skirt has been shortened by turning the top over to form a waistband and elastic added, so it should now be ankle length and a lot narrower at the waist. A gypsy dress perhaps... add a white peasant blouse and some beads. Ha ha... here's the adult view point entering. Do kids even know what gypsies are?

I'm actually guessing that Little Miss won't choose any of the above, which doesn't matter at all. The new skirts will be added to the dress up box, along with the other outfits. They're bound to get lots of use. 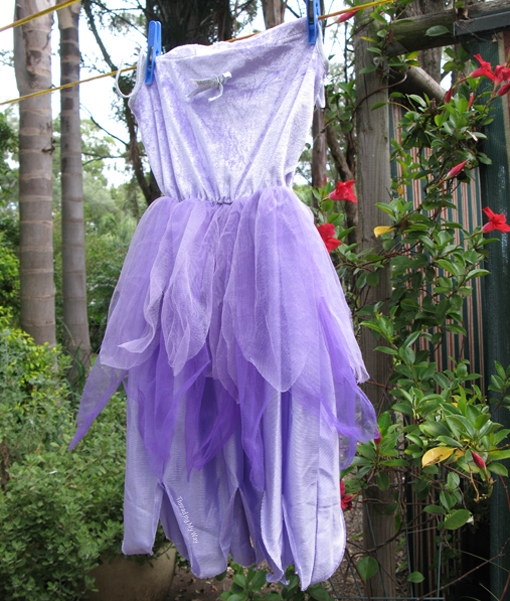 This one's also from an Op Shop, but not bought by me. It belongs to a friend of mine and is only on loan for the party, if Little Miss chooses. A fairy costume... Tinkerbell, but in the wrong colour? I'm not up on the names of current characters. All we need are some wings and a wand. I'm guessing this outfit will be first choice, but we'll see. It all depends on what Little Miss has in her head.

It's a pity we don't still have some of Mum's gorgeous ball gowns. The kids would have LOVED dressing up in them, just as my sister and I did!!!