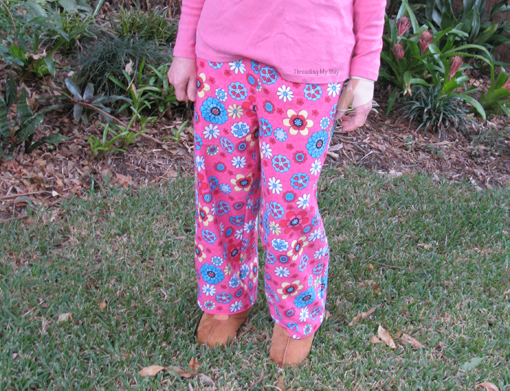 Pyjamas, pajamas, pjs, jammies or jimmy jams... whatever you call them, they need to be comfortable to sleep in. Well my new pyjamas are most definitely comfortable, but they are also baggy and too short.

They do, however, have a waistband that fits well and with elastic that won't twist. Yes, this is the garment I used for a post earlier in the week.

I used Butterick B5153 and made a size small, using a rather bright flannelette, bought on sale some time ago. Now, I don't mind pyjama pants being baggy, but the distance from crotch to waistband is ENORMOUS!!! I can pull the waistband up to my bust... not a good look!!! In the photos, I'm wearing them higher than is comfortable, but not as high as I could.

They are also too short. Being quite short myself, I didn't bother to measure the length of the pattern before sewing. They look an OK length in the photo, but in reality, as soon as I bend my legs, they really are too short.

All in all, my new pyjama pants are more like clown pants, BUT I'll still be wearing them, as they are comfortable and warm. I should have checked the pattern in the first instance, as Butterick patterns are never a good fit for me. 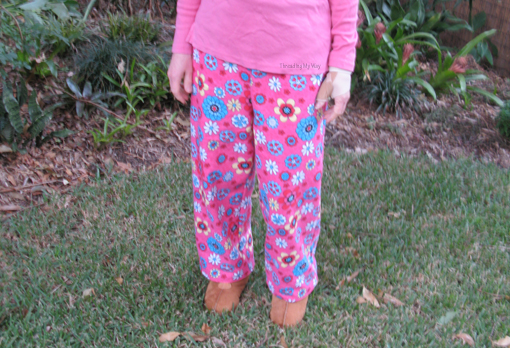 Normally, I don't wear my pyjamas outside, nor my Ugg boots either, but for the purposes of taking photos, on this occasion, I did.  Now-a-days in Australia, Ugg boots are generally worn indoors for warmth, although this was not always the case. Back in the 70s and 80s, we wore our Ugg boots outside as boots, but they were definitely not considered a fashion boot. They were generally considered as daggy back then and still are.

Ugg boots have been around for a LONG time in both Australia and New Zealand where the term Ugg is considered to be generic. UGG Australia boots, owned by U.S. company, Deckers, are, I believe, a fashion boot and the term UGG is considered a brand name. Deckers actually tried to stop Australian and New Zealand companies from using the term Ugg, even though these boots originated in our little corner of the world. I don't view the dispute as U.S. versus Australia, but rather big company versus the little guys. You can read about the debate and the history of Ugg boots on Wikipedia and the Australian Sheepskin Association web pages.

I had a bit of a laugh over my new, warm and ill fitting pyjama pants, so I hope you have too. They were super quick to make, so I haven't lost much time. I really should have measured first, then tried them on as I was sewing. So... this is not an example of good sewing, but another keeping it real post on Threading My Way.

I have bought some more flannelette, to make another pair of pyjama pants. Hopefully, after altering the pattern, I'll get a much better fit, while still keeping the comfort factor.