I've been wanting to have a go at drafting my own patterns for ages now. I'm happy doing so when it's a refashion for a children's garment, but have not had the confidence for a garment for myself. So, when Justine from Sew Country Chick announced her Pattern Making Draft Along, I thought this would be the perfect time to start. Here's what Justine has planned:


The trousers and shirts are the ones that particularly interest me.
Rikka, from Ricochet and Away is running another of her fabulous bi-monthly sew alongs. This month, the theme is Ring Your Neck, with the end result being a scarf. While the northern hemisphere is heading in to Winter, on the other side of the world Summer is almost here. I love wearing scarves for warmth in cold weather and have a ton of them in different colours and fabrics. My daughter, on the other hand, has a lot of different textured, light weight scarves, that she wears in all seasons, to dress up her outfits. I'd like to add a few light weight scarves to my wardrobe.


Each year I say I'll begin my Christmas sewing / shopping early. Despite my good intentions, I always seem to be in a mad rush in the last few days before Christmas. Hopefully this year will be different. Not only have I made 16 little items for children who will be spending time in hospital over Christmas, I've also started on Christmas sewing for the family. I've finished an outfit to be worn on Christmas Day. 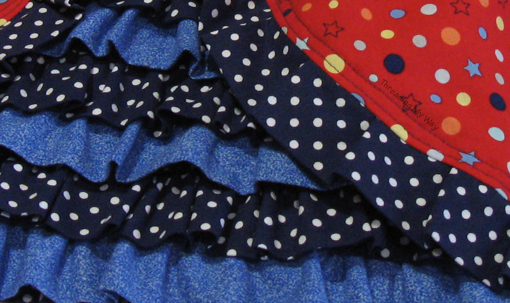 It has lots of ruffles and pleats and is totally girly... an outfit for Christmas, without being too Christmassy. Head on over to the Sew Can She blog, She Sews! to see the whole outfit.
I've started off well, with my Christmas sewing. Let's see if I can keep it up...
... Pam
Email ThisBlogThis!Share to TwitterShare to FacebookShare to Pinterest