The kids have finished their quilts! They are so proud of what they have achieved, and quite rightly so. Today I thought I'd show you the final stages of making the quilt and how we tackled it. 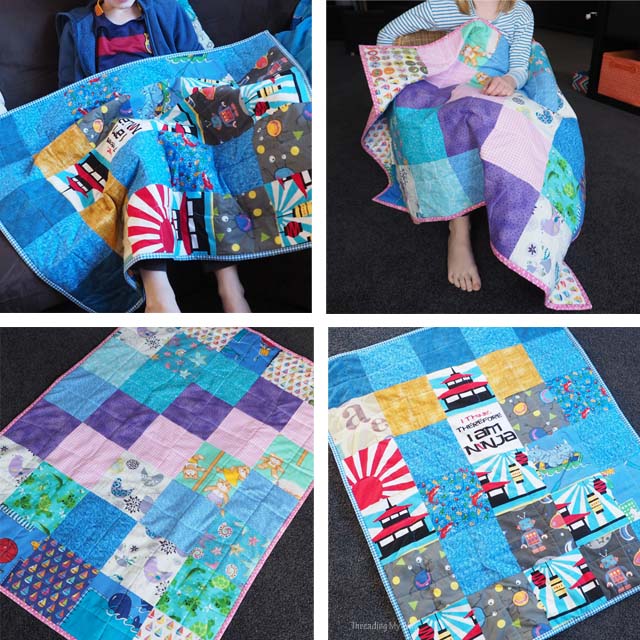 Earlier in the year I explained how we went about turning scrap charm squares into two quilt tops...

Once the quilt tops were made, the kids chose their backing fabric from my stash, and I pin basted the quilt sandwich. 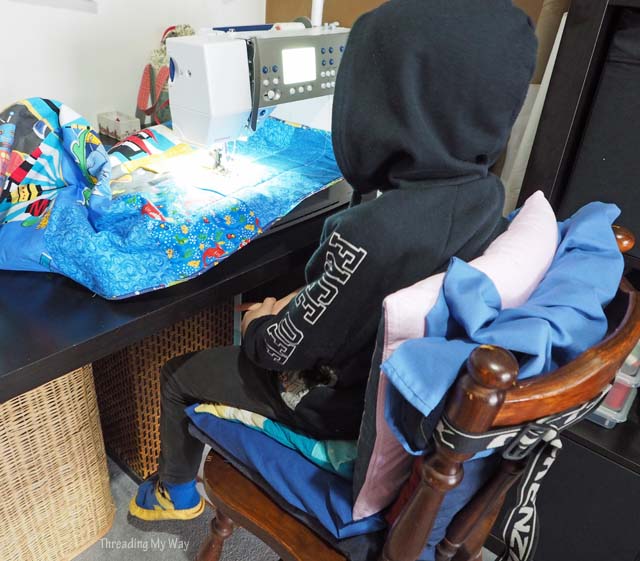 A couple of months later, the time was right to attempt the quilting - this time using my machine. Up until this point, all quilt sewing had been on a little, inexpensive lightweight machine purchased specifically for the kids to use - Pics of set up on kid height table.

The kids had used my machine before, but only sitting on my lap. This time they sat at my table by themselves. Several cushions brought them to the right height, and a sturdy chocolate box under the foot pedal raised it to a comfortable level.

Due to the long times between sessions, rules were reinforced before sewing... 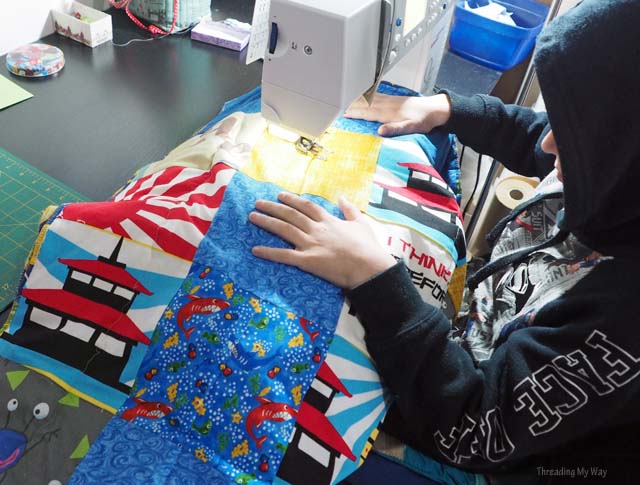 Probably due to the height, I found the need to add a new rule...
Little Mister had a tendency to move his head forward so it was almost touching the machine. I know it's semi-encased, but I didn't want any chance of his hair getting caught up in the moving parts.

The hoodie - nothing to do with the sewing. It's Winter and our house isn't overly warm - Little Mister's way of keeping warm inside.

I found it hard to explain the process of holding the fabric while quilting. A little quilt that I can easily manoeuvre is not so for the kids. The weight of the quilt, and how to prevent the weight from hindering the sewing was a problem. It was hard work, but Little Mister enjoyed the process. After a few rows, however he needed a break. 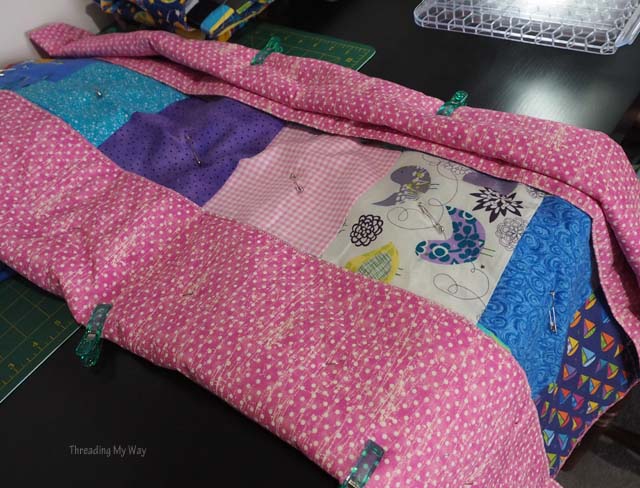 Little Miss, second off the rank, suggested we put a rubber band around the quilt to stop it dragging - brilliant thinking!!! 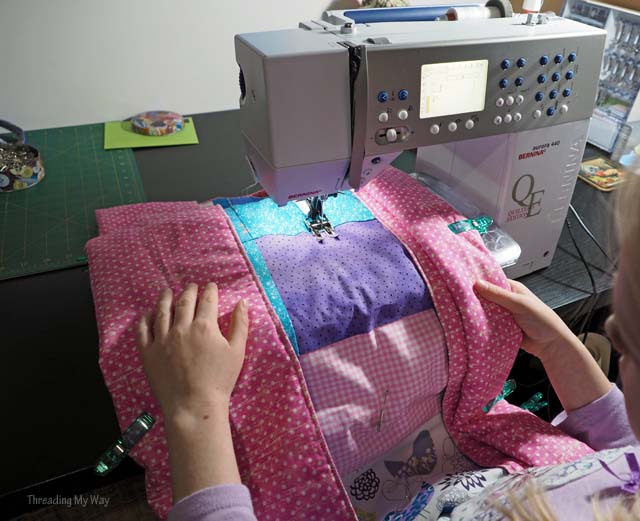 We went with large wonder clips - perfect! The rolled up quilt made the process so much easier. Little Mister agreed when he continued. 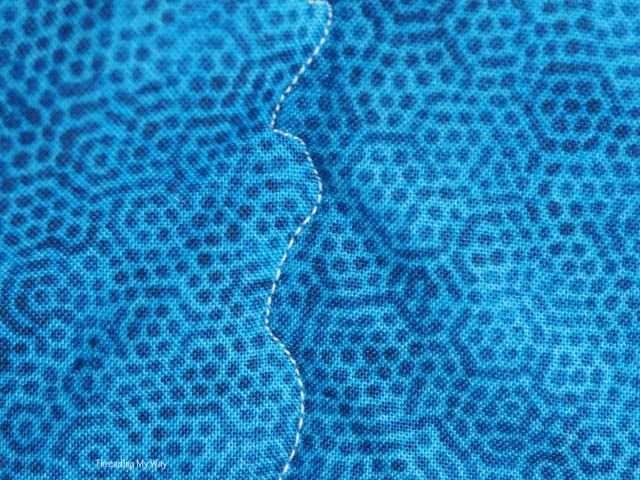 I suggested quilting through the middle of each square, in both directions, and the kids happily went with this. 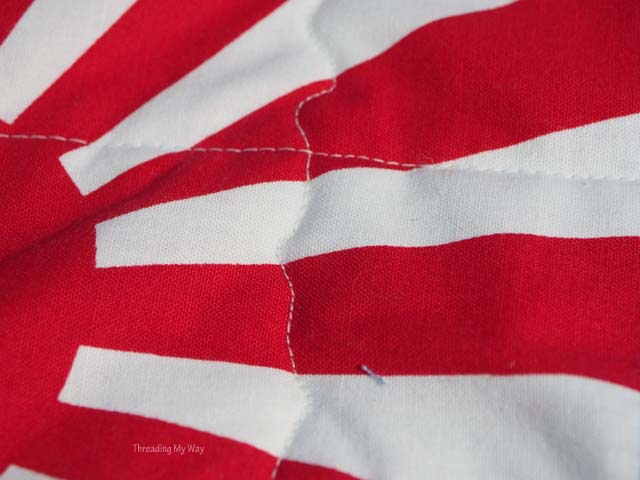 I had envisaged the lines being straightish. The kids had other ideas! 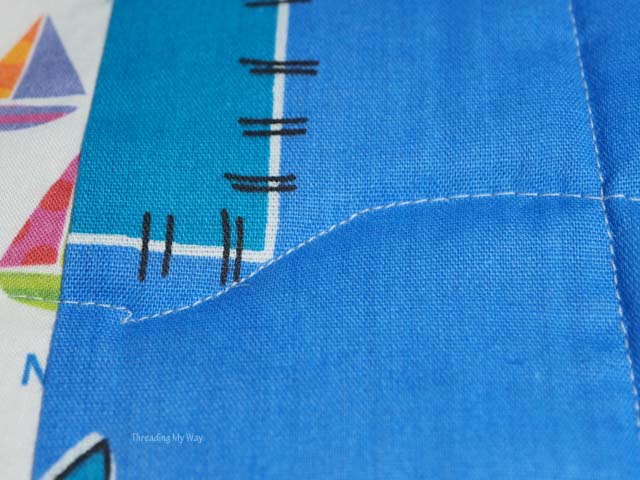 This was their first time quilting, and they were experimenting with the possibilities. Unintended squiggles and angles turned into design decisions, which they then replicated. 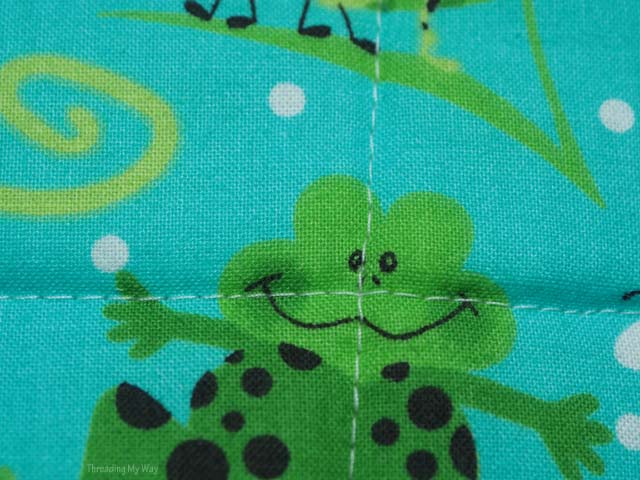 Straight lines, gentle curves, tight curves, acute angles, irregular spacing - these two quilts have them all. And they look fabulous!!!

However, I have to admit to being unsure of letting the kids do their own quilting at the beginning of the process. Would their design features spoil the quilts? I mentioned this to Mr TMW and his comment...

And of course I felt guilty for even entertaining the idea of doing the quilting myself. Wise words, Mr TMW!

As far as the kids were concerned, their quilts were finished once the quilting was done. We just need to cut the threads off, said Little Miss as she proudly showed her quilt off. And so I added the binding. 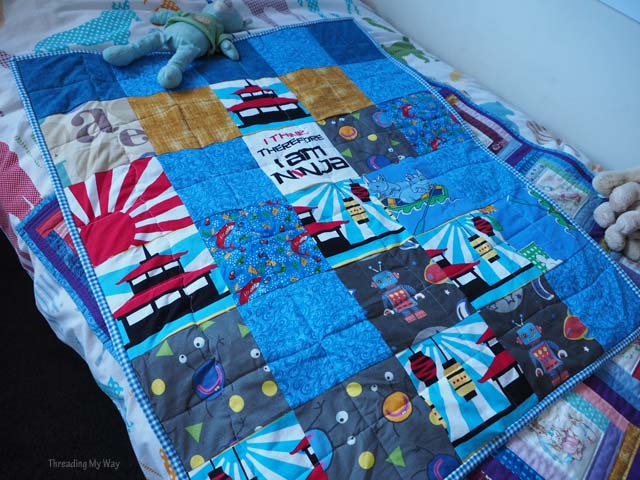 Here's Little Mister's finished quilt, sitting proudly on top of his Peter Rabbit quilt. The day it was finished, he snuggled underneath it while playing the Play Station. 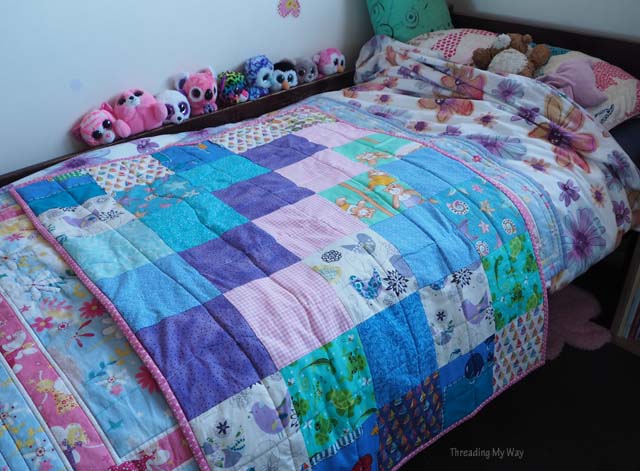 And Little Miss' finished quilt on top of her Fairy Panel quilt. You can just see the cushion she painted and sewed at the top of the bed. 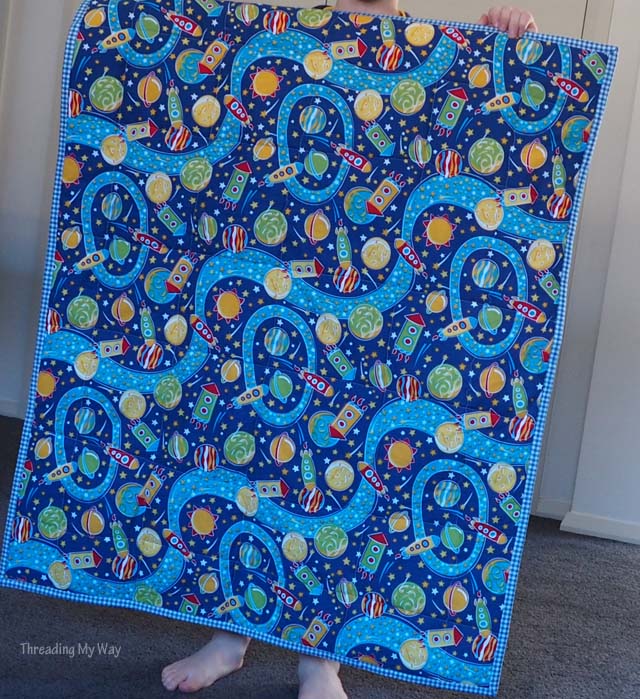 I bought metres of the spaceship fabric years ago. It was a good buy. You may recognise it from the Superhero Capes and Doll Stroller Liners. 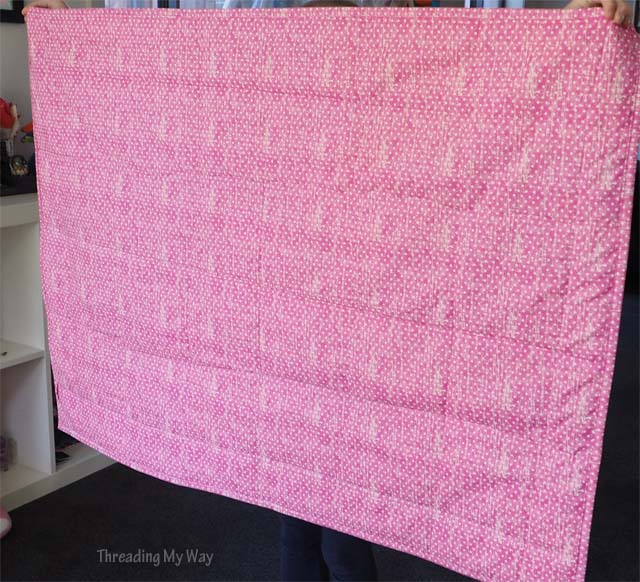 The pink fabric is another multiple metre purchase bought a long time ago. I had begun to wonder if I'd ever use this one, though. 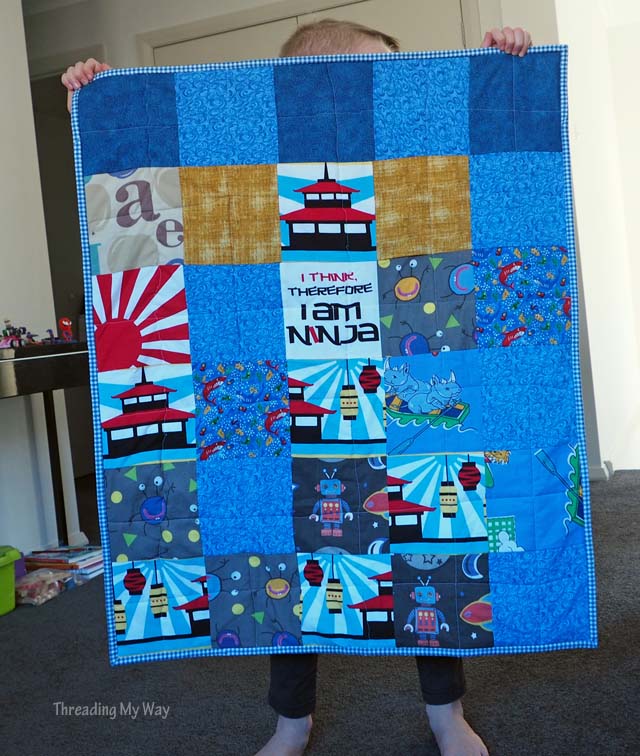 When we began the quilts, I didn't know just how far we'd get. Making a quilt is a much larger project than cushions, doll clothes or pillowcases. Even though both kids were initially keen, there was the definite possibility of losing interest over the long term. 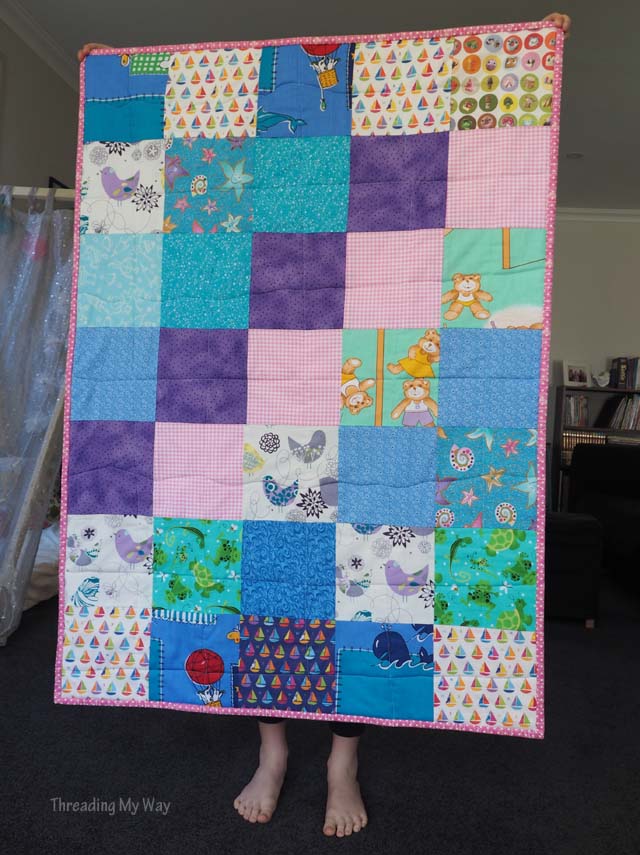 Added to the mix is the fact that the kids don't live with me. When living in the same house, a little bit can be done here and there. When it's just visiting, whether my house or theirs, there is no guarantee that it will be practical to sew, or that there'll be an interest in sewing on any given occasion. 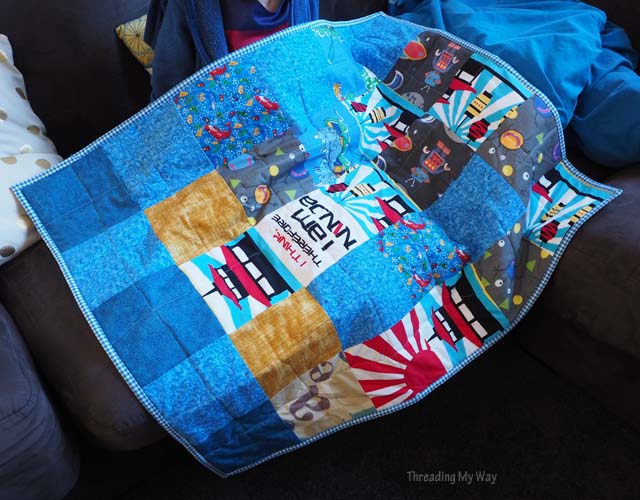 From start to finish, it's taken a year to complete the quilts. Not bad going! The screen printed silhouette quilt for my daughter was started three years ago, and it's still not finished! 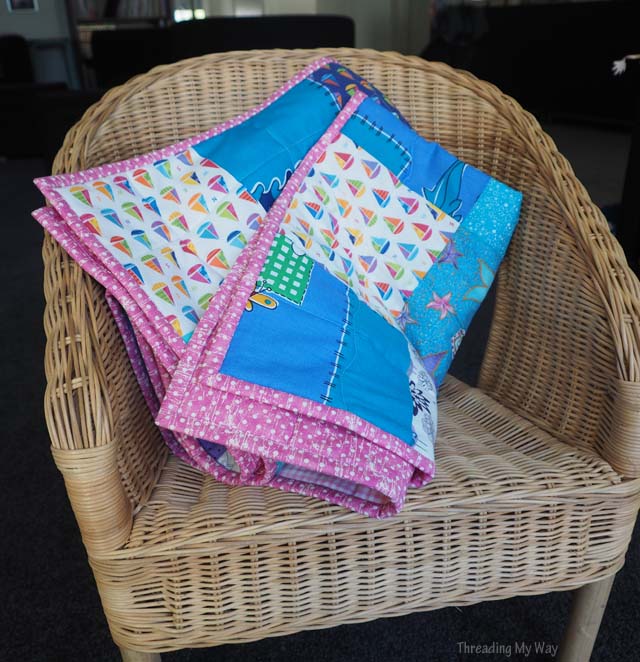 There's one thing left to do. When I told the kids we need to do labels for the back, they asked, Why? Not sure they were convinced by my explanation. I'm uncertain how we'll do the label, or what we'll put on it. All suggestions very welcome.

To say I'm proud of the kids is an understatement!!!