It's almost two years since I came across the Peggy Skirt Tutorial. Ros, from Sew Delicious, had only been blogging for one month at that stage; the same as me. I had never even heard of Mad Men, the TV series that inspired the skirt, but I added the Peggy Skirt to my To Do list. 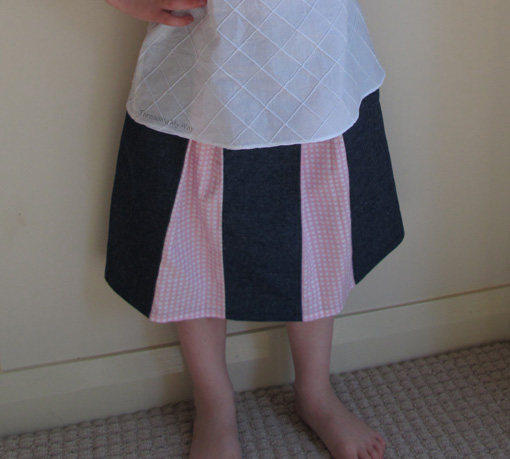 I think I first saw a thumbnail of the Peggy Skirt in a link party. What caught my eye, was the contrast between the indigo denim and the red, polka dot fabric Ros had used for the pleats. Denim is great because it looks good with so many different colours.

I've used a quilting cotton that is pink, with little white hearts. I could equally have used any number of fabrics from my stash.

In the first photo, at the top of the post, the skirt is teamed with a plain, white t-shirt tucked in. The second photo shows the skirt with a white peasant blouse, which covers the large buttons, but still looks good. 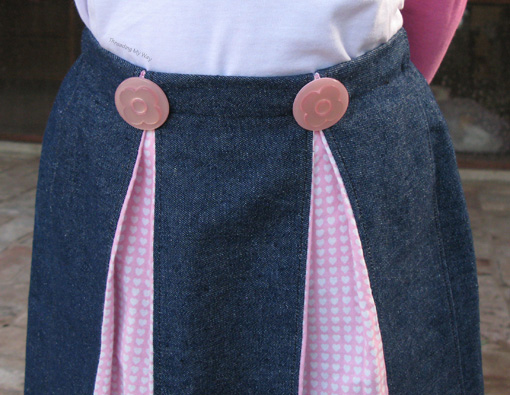 No matter how many times I tried, I just couldn't photograph those buttons to show the true colour. They are almost an exact match for the pink in the fabric, but you'll just have to take my word for it.

It actually took three photo sessions to get these photos. Fading light the first time and a super windy day the second time, resulted in only one decent photo each time. 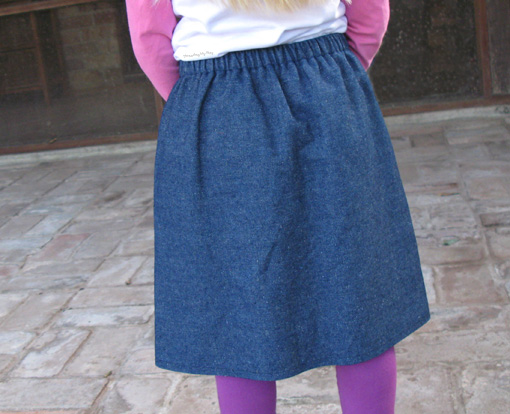 The skirt has a flat front, with a gathered waist at the back. I deviated slightly from the pattern, when doing the back waistband, so I could encase the side seams, but this is not necessary. 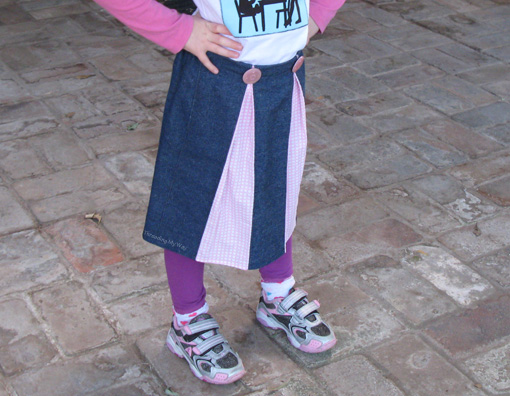 The tutorial is very detailed, with lots of photos, and the design is such that the skirt could easily be sewn by someone who is relatively new to sewing. At the same time, it's a quick project for someone who is more experienced.

Having said that, I used my seam ripper a few times while making this skirt, but it was TOTALLY my own fault and nothing at all to do with the tutorial. Before I began, I read through the instructions... yep, yep, yep, all makes perfect sense. And so I began to sew. At one point, I actually sewed the front denim strip and one of the contrasting pink strips, into a tube, as if I were making a wide bag strap and I didn't realise until I'd neatened the seam. There were another couple of equally silly mistakes.

For some reason or another, I sometimes find that if I make one mistake on a project, I'm bound to make more. Perhaps it's my mood at the time... who knows. I also think that for complicated projects, I know I have to concentrate for every step and often need to refer to the instructions. When a project is easy, I'm sure my mind is elsewhere... that's my excuse anyway!!! 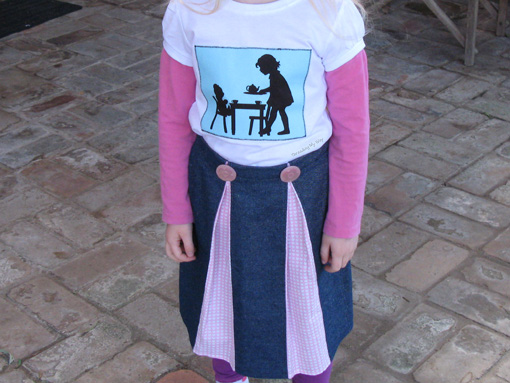 For the third photo shoot, taken on a cool Winter's day, the skirt has been worn with multiple layers, including an appliquéd t-shirt, sewn by my daughter, over at Little Ladybird.

I've deliberately made the skirt a little large, both width and length. It's nearing the end of Winter here, and I'm hoping it will still fit for next Winter. I was tempted to turn a larger hem, so I could let it down next year, but letting down hems on denim always results in a visible line where the old hem was, so I've left it as is.

I love this cute, little skirt. It's suitable for Winter, worn with layers, but can also be worn in warmer weather too... a great addition to the wardrobe.

I'll be adding my version of the Peggy Skirt, to the Inspired by Sew Delicious Flickr group and to the Skirts for Girls collection, here at Threading My Way.