Fixing a Hole in Suit Pants... 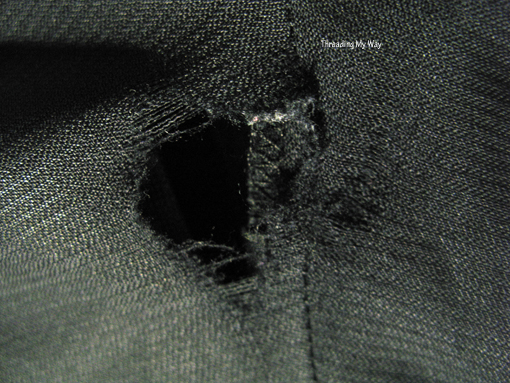 What do you do when you are presented with a good pair of suit pants sporting a rather large hole in the crotch? Not only is there a huge hole, on the other side of the seam the fabric is wearing VERY thin. YIKES!!!

My son and I discussed various options. He just wanted a stop gap measure to make them wearable for a few weeks. If necessary, he said he wouldn't take his jacket off, but he needed the hole closed. Joining the edges of the hole was not an option, as it was way too big and would have caused a lot of puckering.  Leave it with me, I said. 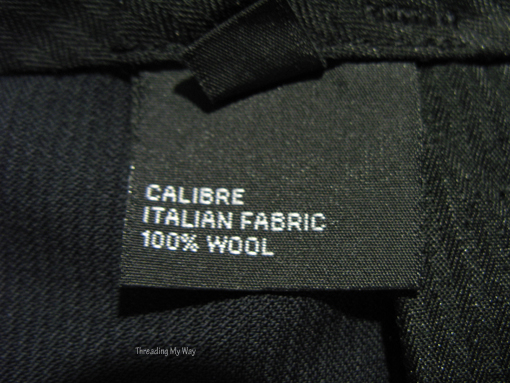 Now I know how to darn, but I've never darned anything as good as this. So, off to Google and I learnt about reweaving using threads taken from a concealed area on the pants and reweaving using human white hair. Well, I don't have a ready source of white hair, so forget that one.
Reweaving sounded too complicated for something that only has to last a few weeks and due to its location, probably won't be seen. I decided darning was the way to go.

Next decision, was deciding on the thread to use. I was fairly confident I'd find something in my thread drawer that would suffice. I may have given away all my sewing and knitting patterns, but I kept all my cottons, as I knew I'd need them for repairs over the years. 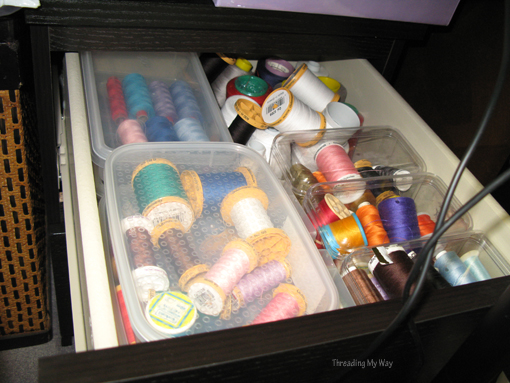 I find the top drawer of a filing cabinet a very workable way to access and store most of my thread. The Decor lunch boxes, stacked three deep on the left, house 100% cotton and Rasant cotton covered polyester thread. Large reels of overlocking thread, plus a few stray reels of cotton thread are at the back and the Ferrero Rocher chocolate boxes, stacked two deep on the right, house everything else. 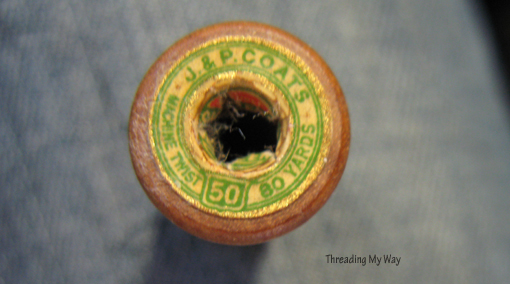 Even though the thread looks quite thick in the photo, it's actually quite fine and on a rather small reel. The thread is very strong and  I'm guessing, a polyester, but I'm not sure. The cotton reel is sitting on my knee and as you can see my jeans could do with repairing... LOL!!! 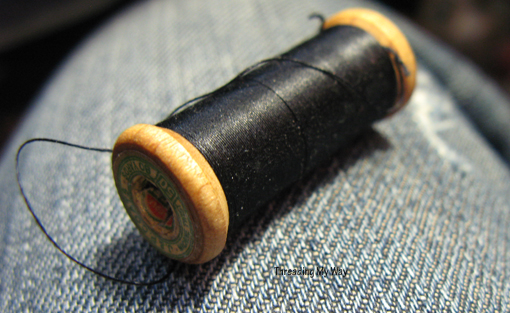 I began with the worn side first. The aim was simply to reinforce the fabric to prevent a hole from forming. I'll let the photos show you how I darned the very thin fabric. The first three photos show the darning, all done on the wrong side of the fabric. The last photo shows the right side when finished. 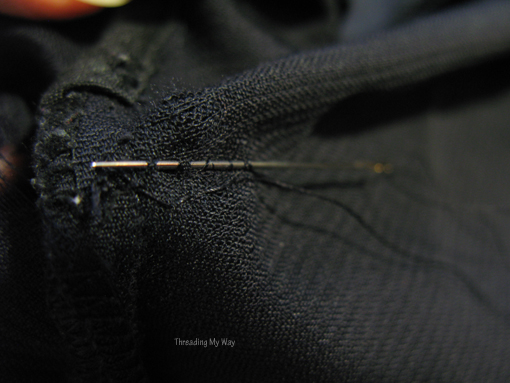 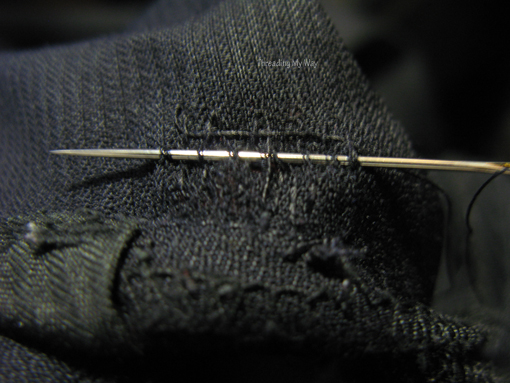 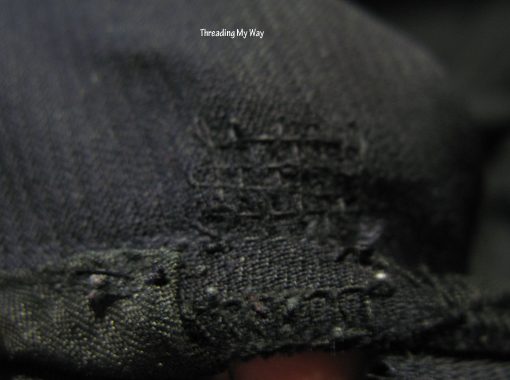 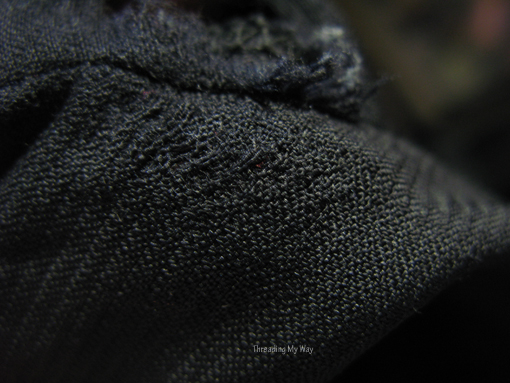 I was happy with the end result. Beforehand, the fabric was so thin, I could see my finger underneath. Now I can only see my finger in one tiny, tiny spot. If you look very closely, you can see my finger as one pixel.

The larger hole took a lot longer; about an hour. 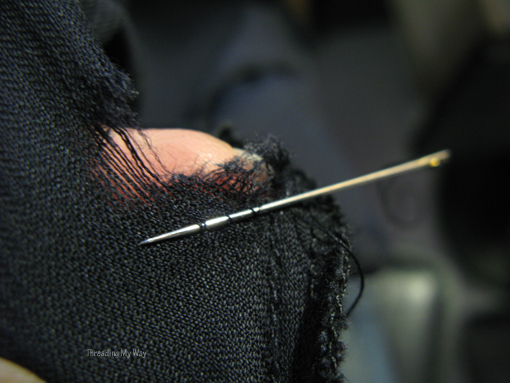 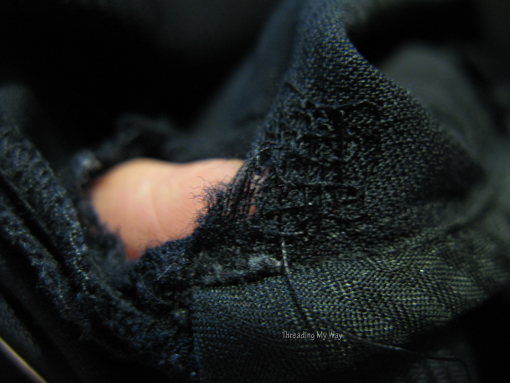 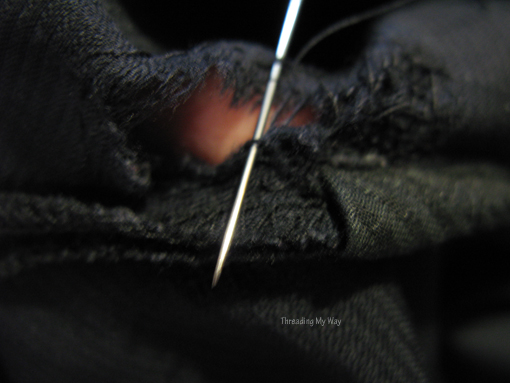 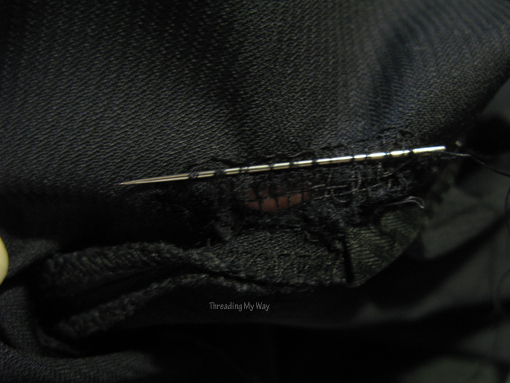 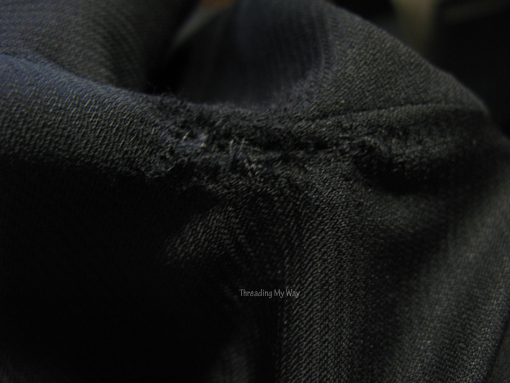 The last photo may not look like it's finished, as the camera shows a tad more detail than you can see with the naked eye. It looks a little better when seen without the camera. It's not overly neat, but that's my stop gap measure.

This is definitely NOT a tutorial, nor what I would recommend. Just thought I'd share a relatively quick, temporary fix, that hopefully no one will see. Coleterie has a very good tutorial on darning.

If you have a good suit with a hole, you can pay to have them rewoven. It's not cheap as my son found out. This suit has been well worn over the last three years and in a few weeks it will be replaced. Guess who gets these pants? ME!!!

I'm already planning the refashion. Apart from the crotch area, the fine, woollen fabric is in perfect condition, so they'll be perfect to recut into a pair of pants for me. I just have to find a good pattern. I need help finding one!!!

Mending Men's Suits, published in 1946, explains anything you could ever want to know on the subject.