I love crafting and painting with the kids, but let's face it, there's only so much room to hang and display their creations. Our last creative activities involved making something more permanent. 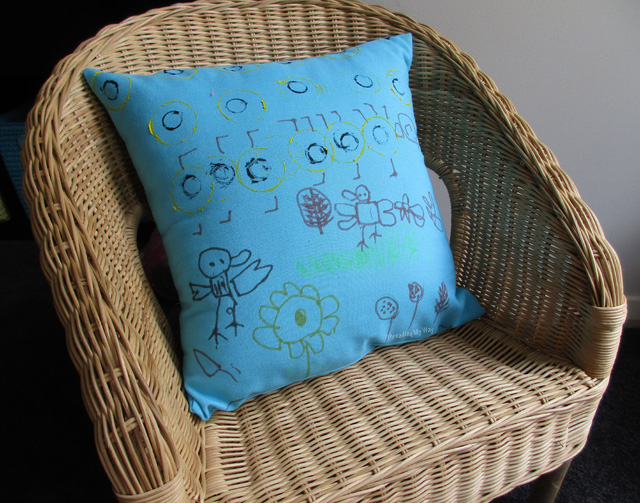 To begin with, we talked about fabric painting, how we'd do it, and what we could make from the painted fabric. After discussing several options, both kids decided that they wanted to make cushions.

Sometimes kids dream up creations that you just know are not going to work, and if you have lots of time, that can be a good thing, as they learn a lot from the process. However, my time with them is limited, so I was pleased with their choice, knowing it would be easy for them to achieve an outcome they would be happy with. 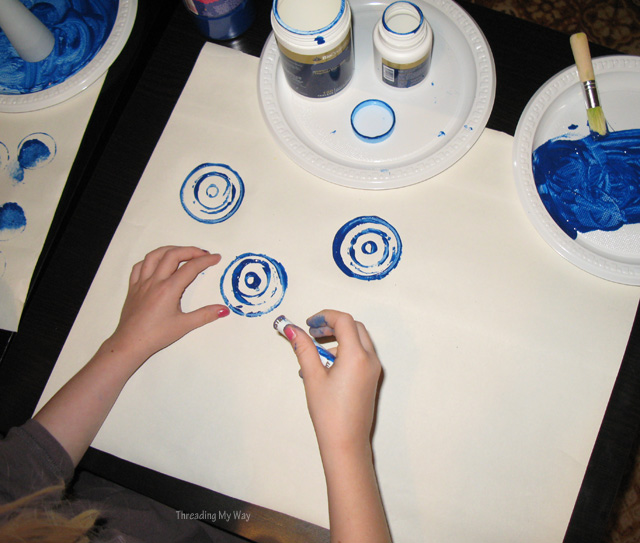 They experimented with designs on paper first. The only brush I gave them was one to spread out the paint on a plastic plate. I also gave them an assortment of plastic bottles (washed), plastic lids, overlocker cones and thread spools, which they dipped into the paint and then stamped onto the paper.

Little Miss set out straight away making a pattern with three circles. She didn't deviate from this idea and carried it though to the fabric painting. 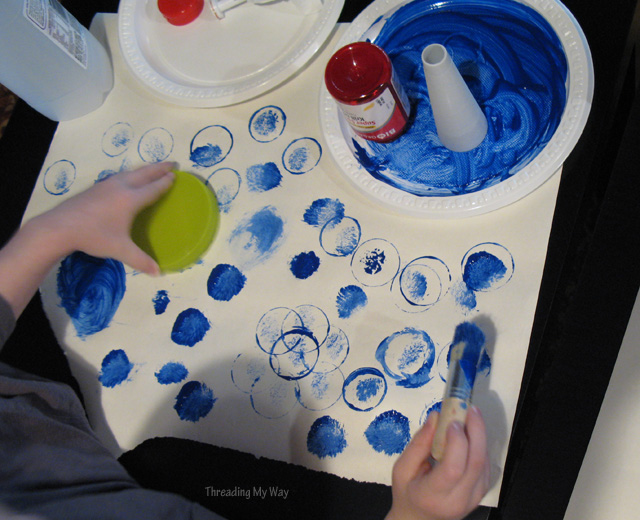 Little Mister did more experimenting, changing his mind as he went along.

In the meantime, I rummaged through my stash and came up with half a dozen solid fabrics from which they could choose. Little Miss chose the pale green. I have no idea of the composition, but it's almost certainly a synthetic of some sort or another. Little Mister's blue fabric is most probably a cotton duck, or maybe a poly / cotton blend.

I cut the fabric a little larger than needed for the front of the cushions, explaining to the kids that anything they painted near the edges would be cut off.

Next step in the process - Do as I say, not as I do. Make sure you have the necessary supplies on hand BEFORE you begin any crafting or painting with kids!!! On getting out the fabric paint, I discovered most of it was dried up. Yikes!!!

The kids were excited and wanted to continue, so we made do with the only two colours that were at all usable. 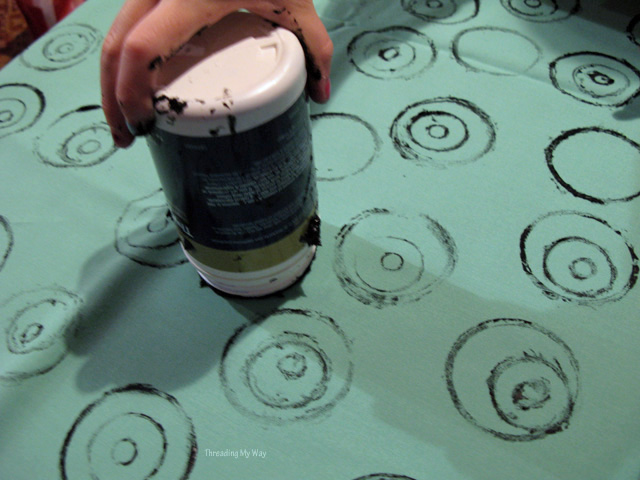 Little Miss worked just with black. You can see from the bottle, just how thick the paint was. Definitely not ideal for fabric painting. There was no way they could dip the bottles, etc, into the paint on the plate, so they ended up spreading it onto the bottom of each container with a paintbrush.

Now I know a less than perfect finish adds to the charm of printed creations, but this was a little more uneven than we had anticipated. It didn't deter either of them. Little Miss stamped sets of three black circles all over her fabric, while Little Mister stamped a yellow and black caterpillar. 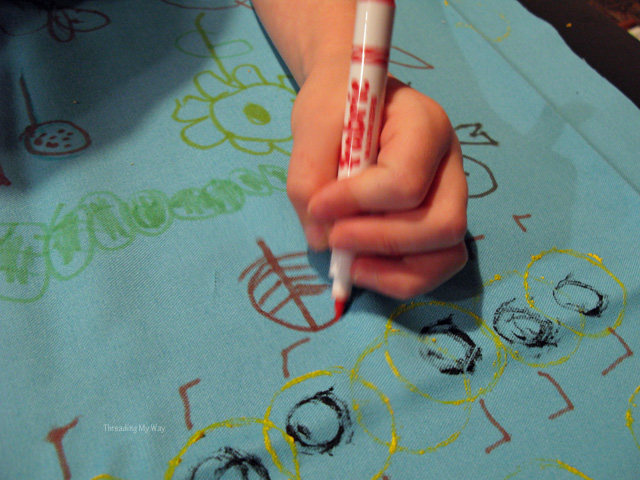 At that stage I brought out the fabric markers. Little Mister finished his caterpillar off with brown legs, then continued to draw pictures on his fabric.

Little Miss persisted till she had the fabric covered with her patterned circles. She then filled in the centre of each small circle with a purple fabric marker and joined some of the circles together with a blue fabric marker (see finished cushion below).

I was skeptical about how she would improve upon her design when adding the finishing touches with fabric markers, so I stopped her at that point and talked a little about...
... all the time being mindful it was her design and not to stifle her creativity.

When she drew the first blue lines, she looked up at me and said, See, it looks good with the blue lines. She has an eye for designing and knows what she wants, and that's a very good thing!!! 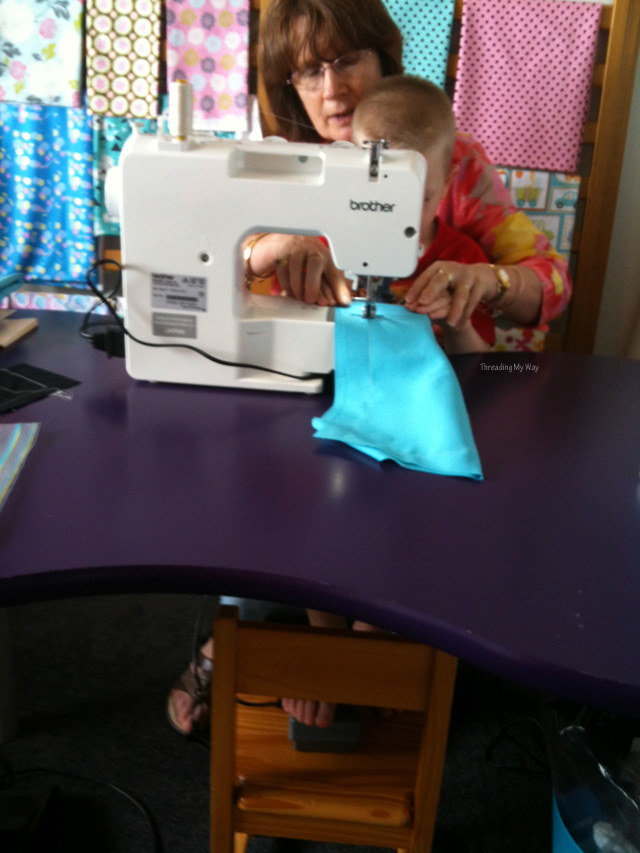 Later on, when the kids were not around, I cut out the fabric for simple envelope enclosure cushions, and machine basted the cushion together. You could just as easily hand tack the pieces in place. I also hemmed the two edges.

Basting or tacking - (long stitches that are later removed) - the cushion cover pieces together, means the kids just have the fun part of sewing with the machine. And there's no pins to worry about! I keep pins right out of the equation when sewing with kids.

As you can see from the photo above, each child sat on my lap and controlled the foot pedal which was sitting on a small chair under the desk. 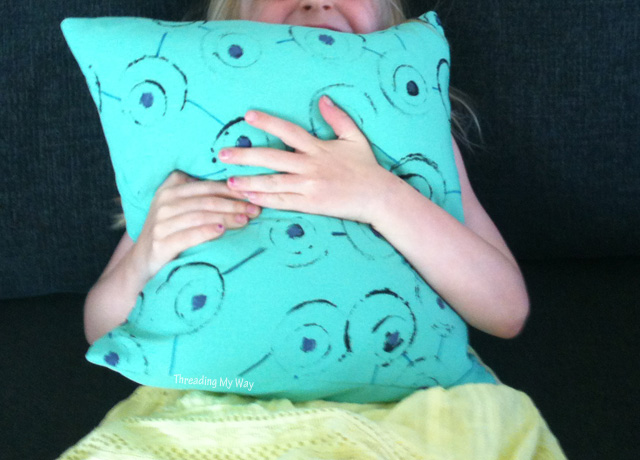 Little Miss had sewn on the machine with me once before, but we still ran through the rules again and did a practise run on scrap fabric first. Even though it was a simple process of sewing four lines and then zig zagging the edges, concentration was needed to keep relatively straight lines (and a little help from me).

If I were to show you the inside of the cushions, you would see some not so straight lines, but that's all part of learning. There was only one super crooked bit that we redid together. 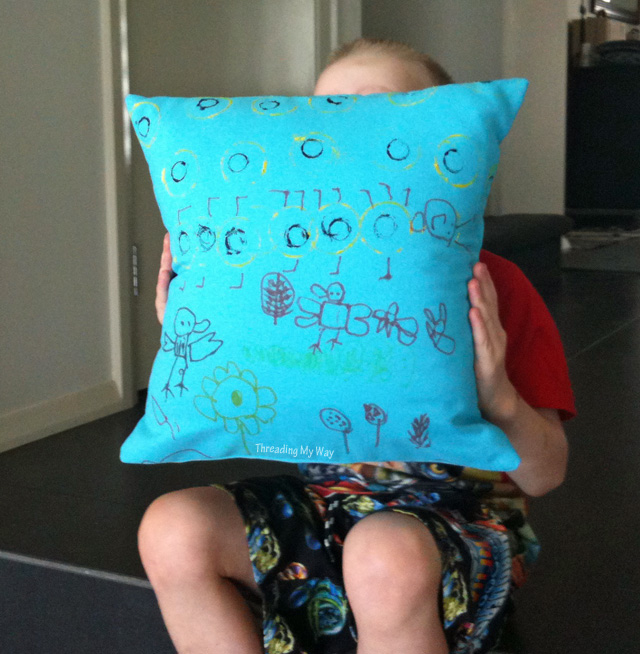 Little Mister had guided fabric through the machine before, but never used the foot pedal. He's also a little younger and more adventurous and so we spent some time discussing and reinforcing the rules, most importantly...
My hands were very close by at all times, just in case, but the kids listened and did exactly as they were told. They both LOVED the fact that they could control the foot pedal and consequently, the speed. What is it with boys? Ten stitches sewn and, Can I go faster? My reply, NO!

Funnily enough, when I later I suggested Little Mister could go a little faster, he ever so seriously increased the speed gradually, and didn't go fast at all. He was quite intent on getting those lines straight.

Last time I sewed with Little Miss, I let her use my Bernina, which has a speed regulator - a very handy function. Not so the cheap Brother I bought to let them use. It didn't matter, though, the kids kept to slowish speeds. 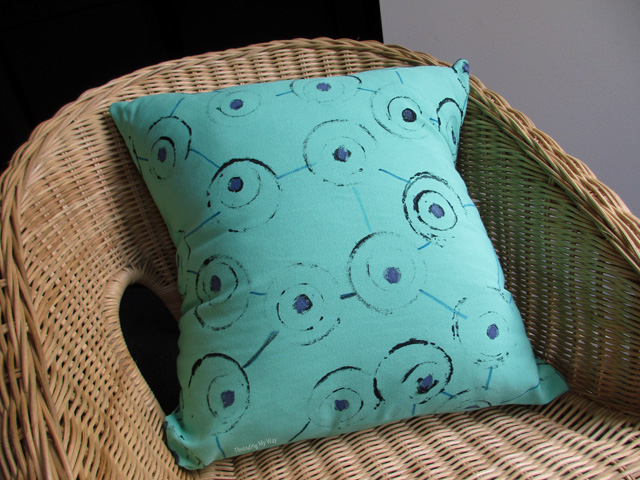 When asked later what was the best part of the process, they both had no hesitation in saying it was the sewing. Preparing the fabric and presenting it to them basted together, kept the process short and sweet, safe and fun. 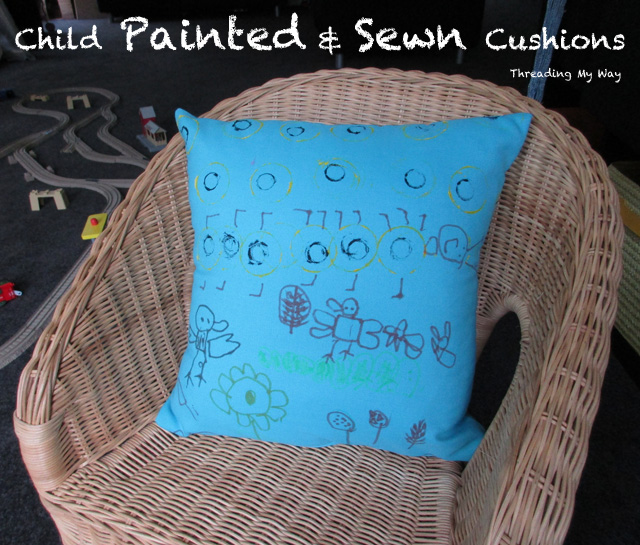 Resources you may find handy...