Jazz up a plain t-shirt by adding some kid painted art work. The kids will have a unique, one of a kind garment that no one else is wearing and they'll be proud to get dressed in and show off their new creations. You can start with a ready made t-shirt, or, as I did, start from scratch and make your own t-shirt. Today I'll show you how the kids and I made two tank tops, with a few pieces of knit material and some fabric paint. 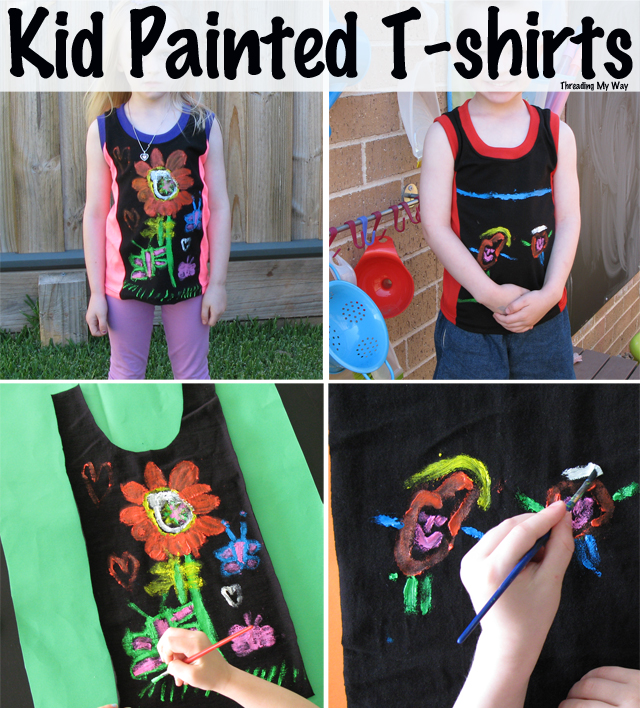 Fabric paint may stain clothes, so dress the kids accordingly - in old clothes or art shirts. Read my tips on mess free painting with kids to keep the experience fun for all involved.

Wash and dry fabric or t-shirt before you begin. If making the t-shirt from scratch, paint the fabric after it is cut out, but before it is sewn. I've chosen to use the Everyday Tank Top (affiliate link), but you could use any t-shirt pattern. As children will be using the paint, make sure it is non toxic and read the instructions that come with the paint. 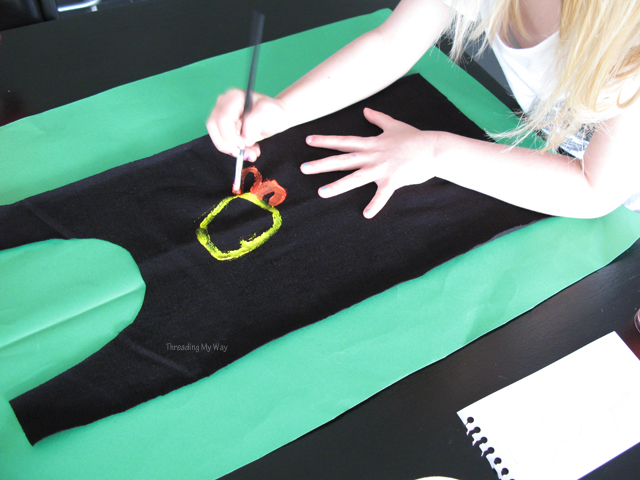 Painting before you sew, keeps paint on the intended sections only and if they really muck up their design, it's also easier to start all over again, by just giving them another front panel. Place a large sheet of cardboard under the fabric. As well as protecting the table, the cardboard makes it really easy to turn the fabric to different angles as needed.

If you are painting a ready made t-shirt, insert a piece of cardboard or thick paper between the front and back. I would still put the t-shirt onto cardboard as well.

Unlike when painting on paper, I prefer to use fabric paint with just one child at a time. If you have another child, this, of course means they need to be occupied with something else. 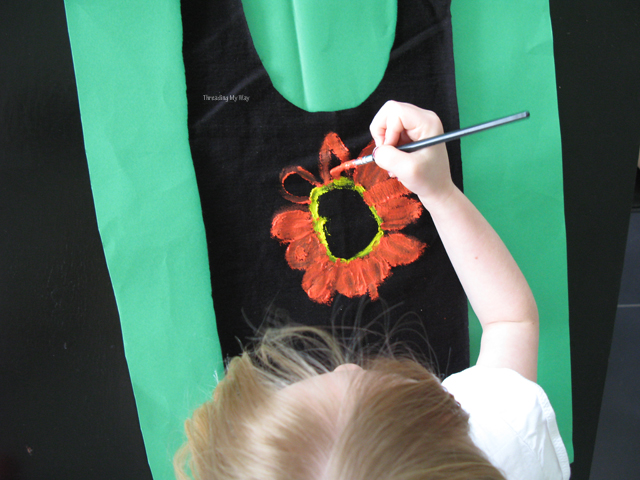 We found it was easier to paint in strokes from the inside to the outside. This helped prevent the fabric from moving. Looking back now, I could have taped the outside of the fabric to the cardboard to hold it taut, but I didn't think of it at the time. 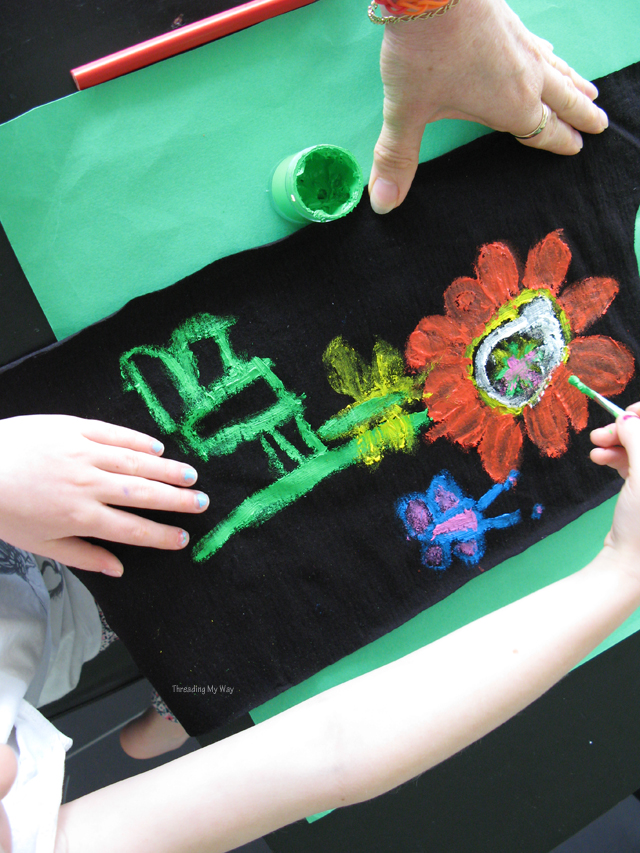 In the main, the kids could prevent the fabric from moving by themselves, but every now and then I held the fabric taut to make it easier for them. 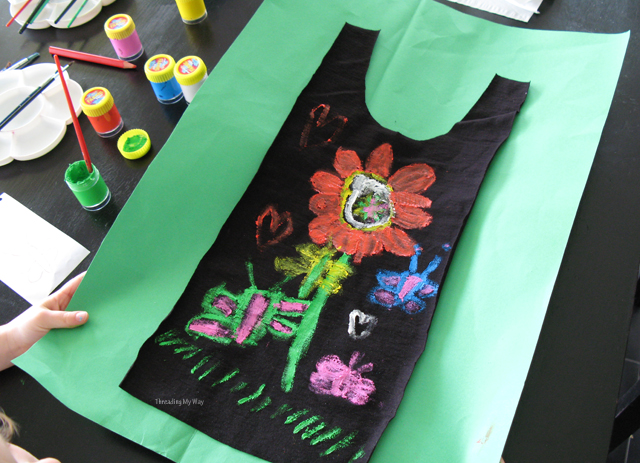 We stuck to one paint brush for each colour, always putting the lids back on in between colours, to help prevent the paint from drying out.

Little Miss decided on a flower with butterflies, adding three love hearts at the end. She spent a long time creating her picture and was very happy with the result. 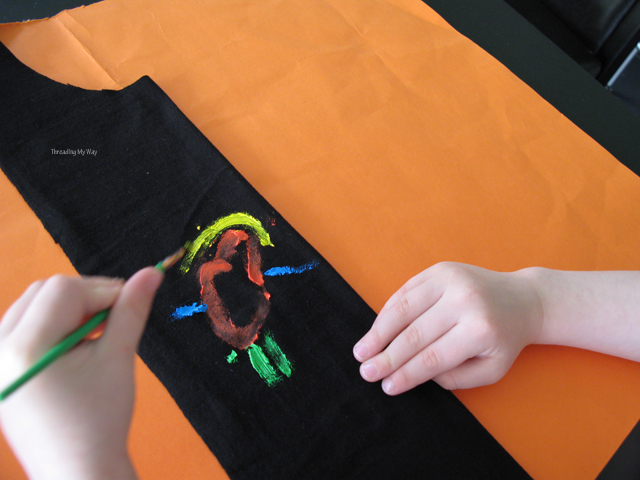 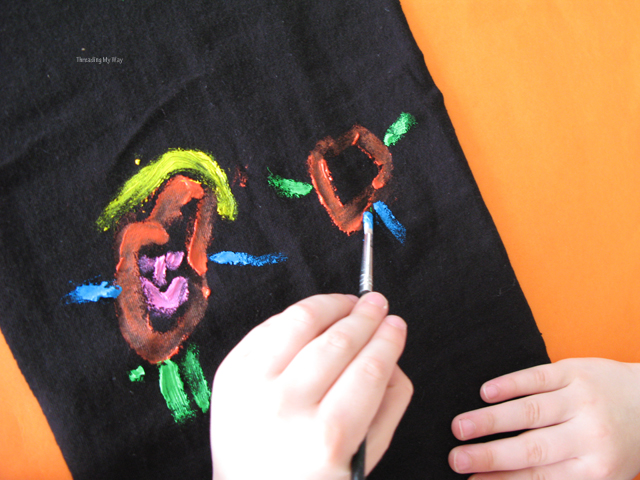 ... he's left handed and it would have been easier to stop smudges, if he'd painted the right side first. He did well, though and kept his had off the paint. Second up he painted himself. 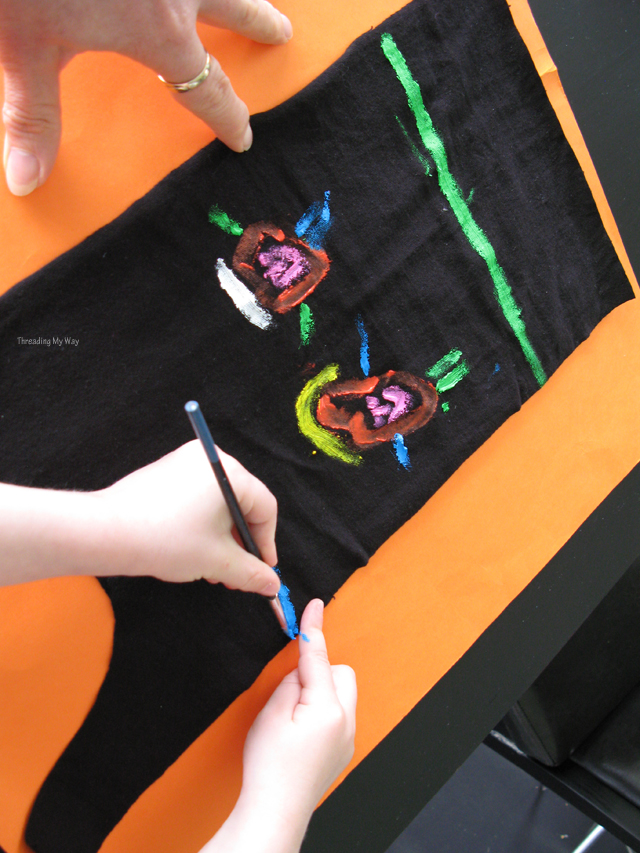 As all young children do, he wanted grass and sky. I had initially told the kids to paint from the top down, so they wouldn't drag their hands across the paint. Little ones, of course, like to paint in the order in which they are used to and this means grass and sky come last. No problem; we just swung the cardboard around and painted the sky upside down. 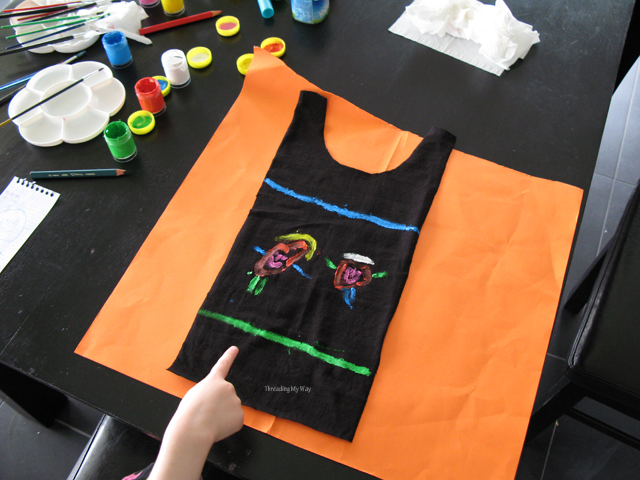 Little Mister was also very pleased with his creation. You can see that we didn't manage to keep all the lids on the paint this time, though. 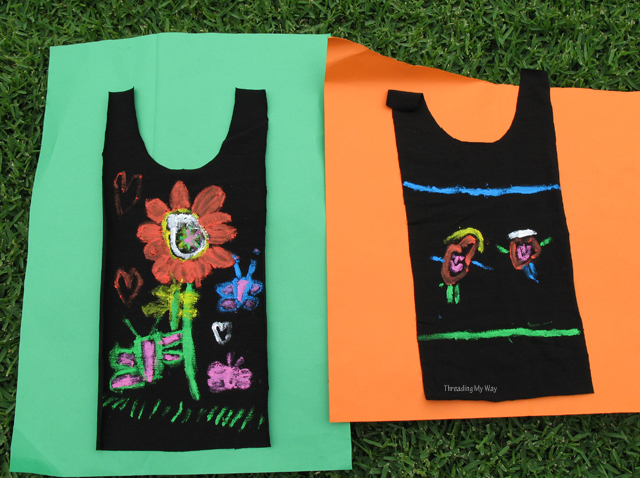 We initially put the fabric out in the sun to dry. I left them overnight before heat setting with the iron, then sewed them up. 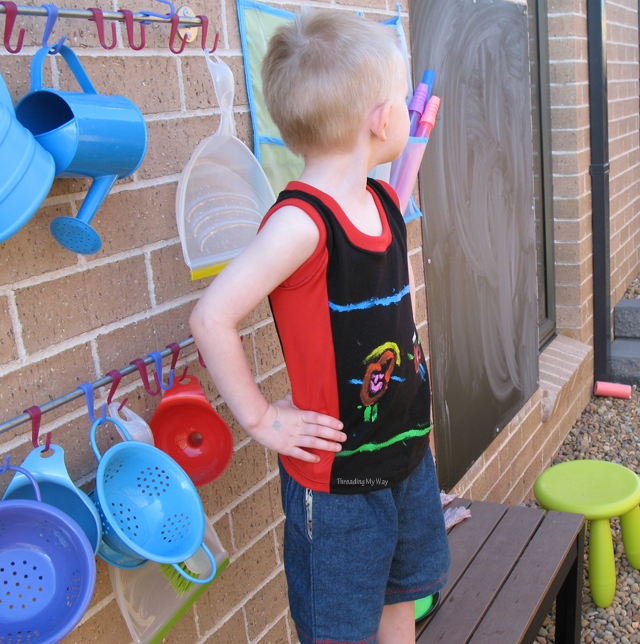 The kids were thrilled with their new t-shirts. Little Mister usually likes very quick photo shoots, but on this occasion he co-operated 100%, even suggesting poses for me. He's wearing his new tank top with denim mud puddle splashers; shorts he has worn a lot. 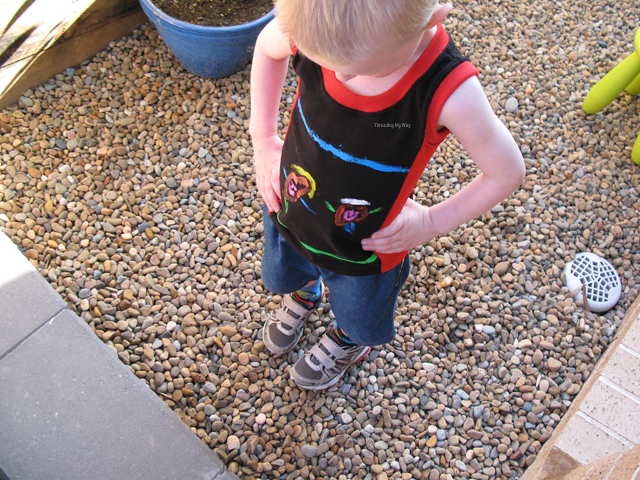 His tank top could have been a little longer, but I have to be honest and say I didn't even look at the size chart in the pattern, so my own fault entirely. I just went down a size from Little Miss'. I knew hers would fit perfectly, as I'd previously made her one for the Everyday Tank Top and Dresses blog tour. The kids have talked about more tank tops, so I'll make the same size for Little Mister, just making it longer. 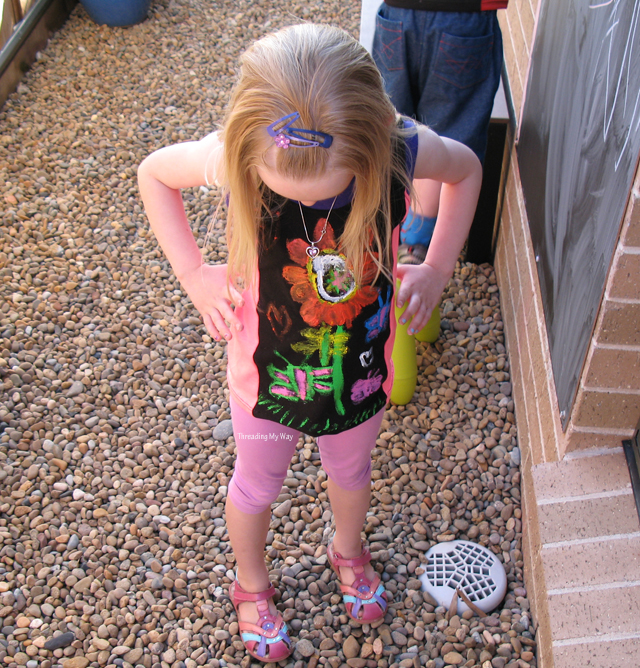 Little Miss loves her new t-shirt, but she had initially not wanted the black fabric I had shown her. I'd already cut out the fronts and backs without consulting the kids about colours. I knew Little Mister wouldn't be too fussed, and just showed him how the t-shirt would look with black front and back, teamed with red side panels. 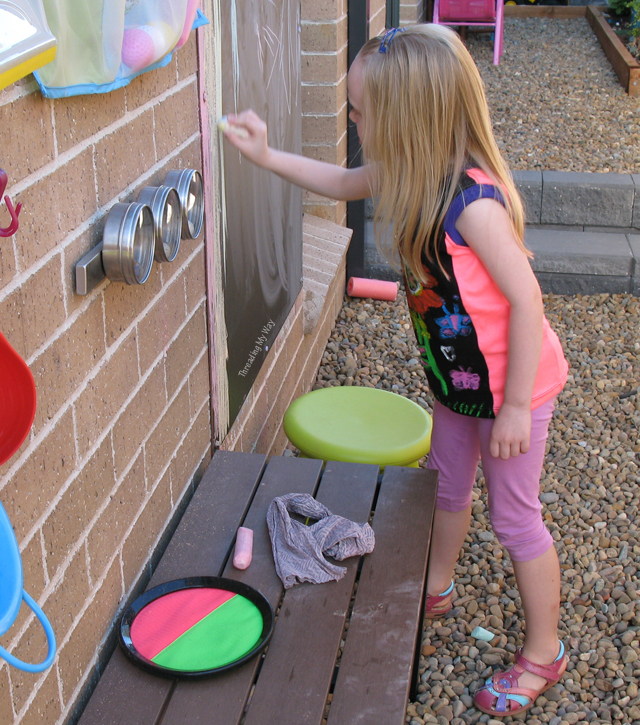 Little Miss, on the other hand, I knew to include in the process. I showed her several different colours for the side panels, but with the front and back already cut from the black. I wanted to use black as I knew the paint would really stand out. We compromised, with Little Miss agreeing to have black at the front, if the rest could be pink. We were both happy!!!

She decided on the purple binding. I had wanted black, but I think she has a better eye for colour than me. Now that it's finished, I can see that the purple works better than black would have. 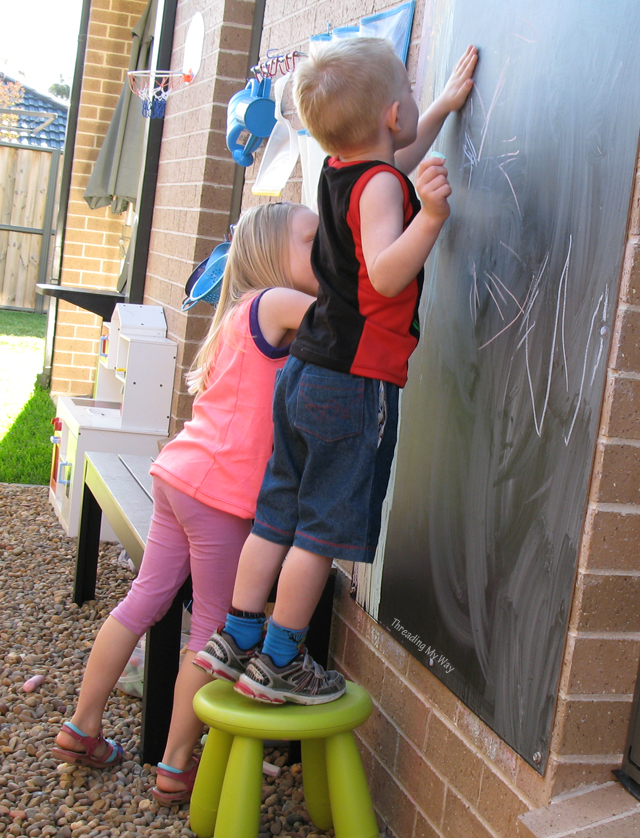 By the end of the afternoon, the new tank tops were covered in chalk. The kids engrossed themselves in drawing a rainbow on the blackboard (chalk board) in their play area - a narrow passage way converted to a play space that's just theirs.

This is only the second time we've used fabric paint on clothing, but it most definitely won't be the last. The first was over two years ago when we made a t-shirt dress (tutorial to make the dress). That dress was VERY well worn and I'm fairly certain these two tank tops will be too.