Quilt Seams ~ Pressing Open or to the Side... 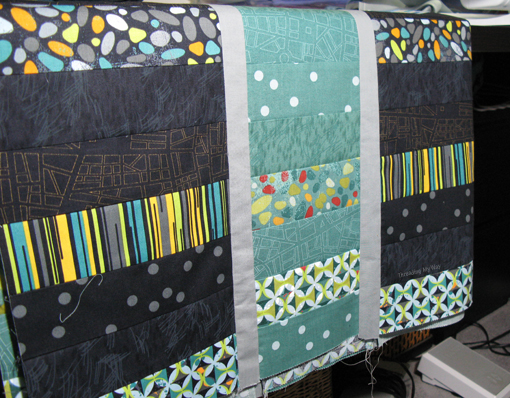 When I made my first quilt, the tutorial I followed said to press the seams open, so I made the assumption that all quilters press their seams open. For my second quilt, I didn't follow a tutorial or pattern, so I again pressed the seams open.

Since finishing my Scrappy Blocks Quilt, I've discovered that not all quilters press their seams open. I read an interesting post, Let's Talk: Pressing Seams Open vs to the Side written by Julie, from The Crafty Quilter. Julie encouraged her readers to leave a comment on the topic. Lots of different points of view... some only use one method or the other, many use mainly one method and others chop and change depending on the project. 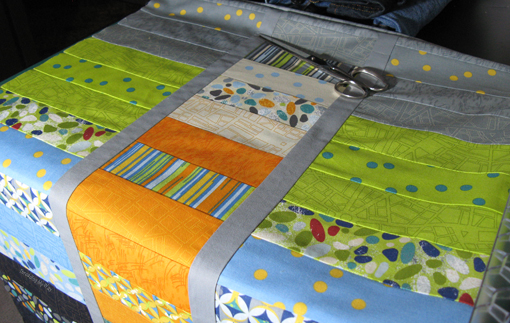 One point which got me thinking, was that pressing to the side would make the seams stronger than pressing open. We were always taught to press all plain seams open when sewing clothes. Sometimes I still do, but more often than not, I'll neaten with an overlocker (serger) and press to one side.

When I learnt to sew, we were using a treadle sewing machine which did not have a zig zag stitch. Plain seams, which were always 5/8", were neatened by sewing a small hem on the raw edges of the seam. To do anything other than press the seams flat would have been too bulky.

In recent times, I've made a few pairs of children's shorts with the crotch seams pressed open, neatened on either side and then topstitched on either side. There is more strain on the crotch seam than the rest of the seams in pants. The stitching broke on one pair of shorts and I re-evaluated pressing the seams open. Here is my reasoning... If the seam is pressed to the side and then topstitched, the topstitching will take some of the strain. With a seam pressed open, the topstitching (done on both sides of the seam) will not take any of the strain.

Fast forward to reading the post on quilt seams, and it made sense to me that if the seams were pressed to the side and then quilted along the length of the seam, then it would make for a stronger seam. I thought I'd give this theory a try and so, the quilt top pictured here has all seams pressed to the side. 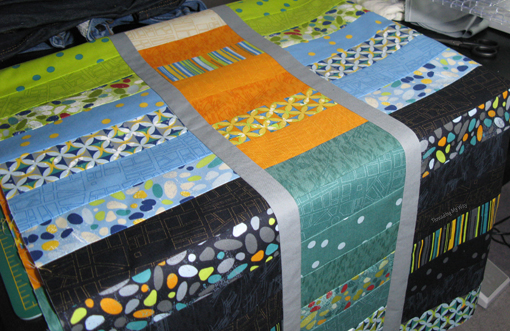 How strong the seams are as compared to my first two quilts, only time will tell. What I did notice was that on the right side of the quilt top, some of the seams were not pressed as flat. I don't mean bulkier because there's an extra piece of fabric behind, but not pressed as flat at, or next to, the stitching of the seam line. It's not a big problem, but noticeable to my eye.

Perhaps I need to improve my pressing skills. I know I still have a tendency to iron, rather than press.

Speaking of the strength of seams, I ALWAYS backstitch at the start and end of every seam I sew when I am making clothes, so I naturally do the same when quilting. This backstitching is often cut off when squaring or trimming a block or the quilt itself. In addition, other seams are cut in the process of making a quilt. I know my backstitching won't come undone with clothes I have sewn, but I don't have the same confidence with the stitching of the seams in my quilts.

I know that where a seam is cut, it will be sewn over by another seam, but is this enough to prevent the stitches from coming undone? Does the stitch length have anything to do with the strength of the seams? 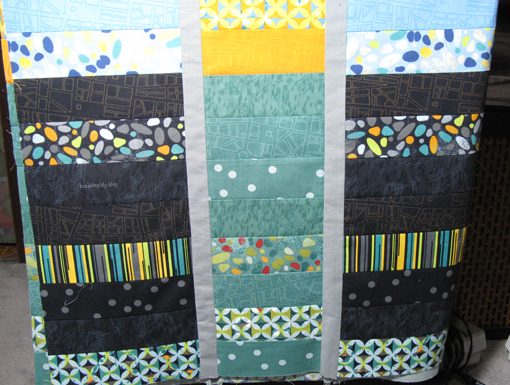 I'll give you details about the fabrics and the process of making my third quilt, when it's been quilted.. Tomorrow I'll pick up some batting and hopefully the quilting itself won't take too long. Once it's finished (if all works out OK), this quilt will be donated to the Springwood Winmalee Bushfire Quilt Appeal. Last October, over 200 homes were lost in devastating bushfires in the lower Blue Mountains. Residents who lost their homes will be invited to choose a quilt towards the end of March. Wish me luck with the quilting and finishing in time.

Since making this quilt top, I've found some more posts on pressing seams. Some I've already read, but most I've just skimmed through.

I haven't yet decided which way I will press the seams on my next quilt. Funnily enough, even though I think the seams may(?) be stronger if pressed to the side, I think I'm sort of leaning towards pressing the seams open. I would love to hear your thoughts.

Edited to add: The Barcelona Strip and Flip quilt is finished.